Seizing a miracle with the Big C

Last week while driving on a backroad near Bowden a magnificent sunrise revealed itself from the east. I stopped, took a few photos, and then leaned heavily against my car. For several long minutes I stood and reflectively gazed.
Oct 29, 2019 9:23 AM By: Johnnie Bachusky 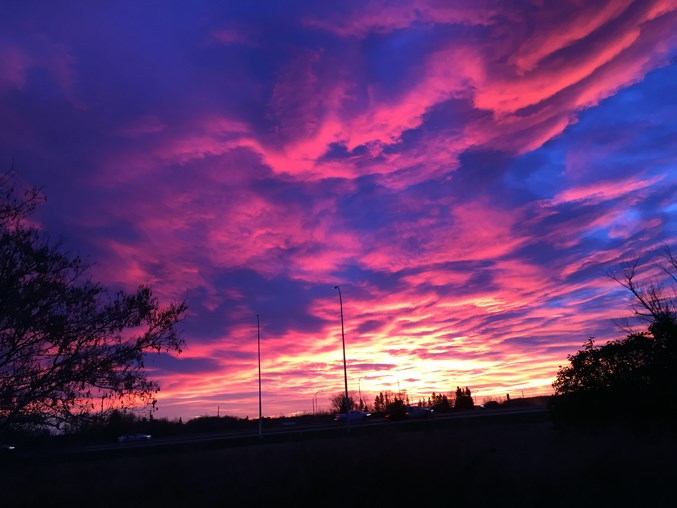 Sunrise over Bowden on Oct. 25.

Last week while driving on a backroad near Bowden a magnificent sunrise revealed itself from the east.

I stopped, took a few photos, and then leaned heavily against my car. For several long minutes I stood and reflectively gazed. It’s quite the sensory boost to get a euphoric message from a brilliant kaleidoscopic morning sky.

Five weeks earlier in mid-September I had a similar experience with a sunset, one that triumphantly shook me out of dark three-day doldrums. That too was a message; a wake-up call offering strength out of near paralyzing gloom.

Pure beauty and the strength it brings are like that, and it can come a number of ways, through natural wonders, a song, or a smile. Sometimes though it isn’t immediate, or can be right in front of us but for some reason fails to register. And then there are times we have to search feverishly to find it, or work tirelessly past fear to seize it.

But it will come. It must. Answers, no matter how or why they come, are life’s greatest joys, a former 12-Step sponsor once told me.

When I found out in September I had cancer the first reaction was to get on with what was right in front of me. I was in Winnipeg for a family wedding. The cancer thing was tucked away neatly; out of sight, out of mind.

On the flight home, it occurred to me I had some sort of duty to tell someone. That first someone was my daughter, then a close cousin, a good friend, and my boss. That was it. It was no one else’s business, and besides my cancer was treatable.

But was I humanly treatable? There was an important opportunity here, like a message through the heart language, or ones that come through a glorious sunset and sunrise. The first one got me out of gloom, the second revealed love in the morning, and for me to push past myself and to nourish it every day.

Two weeks ago the cancer was surgically removed. In its place are the answers I needed, and one super cool scar to show special people.

Most of all is that opportunity, now extra special because of the lifelong promise it brings.

There are many, many more stories to write, along with countless photographs to take. There’s a new Who album to celebrate in December, and two incredible grandchildren to adore and spoil. Best of all there is love, always there, always providing answers when sought.

I’m seizing it and holding it forever.

Johnnie Bachusky is the editor of the Innisfail Province.