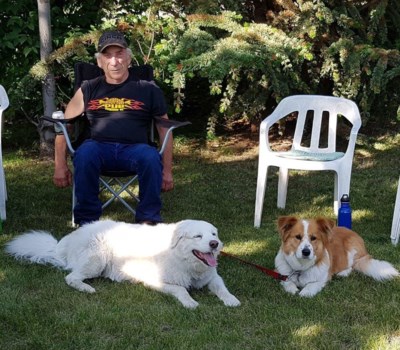 Dan Sylvestre died at home in Didsbury, Alberta on Tuesday, September 1st at the age of 70 years.

Relatives and friends met at Knox United Church in Didsbury on Tuesday, September 8th for visitation and a funeral service. Reverend Janice Walls conducted the service. Burial followed at the Carstairs Cemetery.

Dan was predeceased by his father, Raymond and his sister-in-law, Rose.

Dan was blessed to have had a vibrant life and he will be greatly missed by his family and friends.

Dan was born in Montreal and grew up on Air Force bases across Canada. He completed high school in Edmonton and went on to study Auto Body at NAIT. Dan changed careers and trained as a Harley-Davidson mechanic in Milwaukee, Wisconsin. He worked for many years as a motorcycle technician.

Dan was a supporter of the Royal Canadian Legion and enjoyed his involvement with the Carstairs Branch. He was a great friend to animals and will be missed by his two dogs and two cats.

Dan’s family are grateful to all those who were first on the scene, assisted Dan and did what they could to help.

If friends so desire, donations can be made directly to Inn from the Cold. Inn from the Cold provides shelter and services to children and their families who are without homes. This is an organization Dan supported for many years.  donate@innfromthecold.org