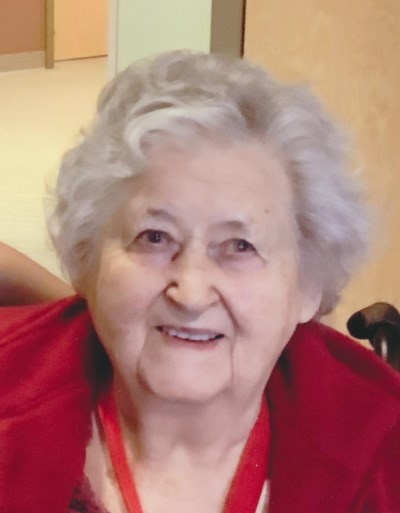 Isabell was the second child of John {Jack} and Alethea Thomson, born in the General Hospital, Calgary Alberta on January 27, 1932.

Her early years were spent in Calgary. Sister Doreen and herself were boarded with a family near Innisfail for a short time. She then was hired to help Grandma Hogg at the family farm. There she met her future sole mate Harry and together they started a family of their own. Lawrence {Karen} Frances Beekman {Henry} and Bruce {Leona}.

Harry died suddenly in Oct of 1970 leaving her with a young family to care for which, she did. As did many farm women she made the best of it; milking cows, raising chickens, putting in a garden, sewing and knitting. Over the years she became a part of the community, joining a lady's group, working at various community functions and doing what she loved, quilting by hand, making jams to sell at local Farmers Markets and selling fresh cream and eggs to the ready customers of the area. This she did for some 60 years from her home on the farm near Huxley. In 2012 she moved to Sunset Manor in Innisfail and made many new friends there,

In her retirement years she enjoyed travelling across Canada and the US, visiting family and made new friends where ever she went. Family and people were very important to her. Isabell would always make the best of whatever the situation with a positive attitude, never spoke ill of anyone and there was always a place at the table for anyone who stopped by.

Isabell always enjoyed her grandchildren and the children of the area. Each halloween she would dress up to greet the little spooks and goblins with treats but they had to pose for pictures to put in her album. Many family reunions were held at the farm where members of her family would gather to tell stories and enjoy each other's company for a brief time. These were always special to her.

Isabell passed away quietly of natural causes on May 9, 2020 with family at her side.

Isabell was predeceased by her parents, husband Harry, brother Richard and sister Doreen. She is survived by one brother, John, 1/2 sisters Eves, Collena, Elvena and Betty, her 3 children, 10 grandchildren 18 great grandchildren as well as numerous nieces, nephews and cousins.

As per her wishes she was cremated and there will be no service.

Donations to the charity, organization of your choice. Condolences may be sent to the family at www.sunsetltd.ca