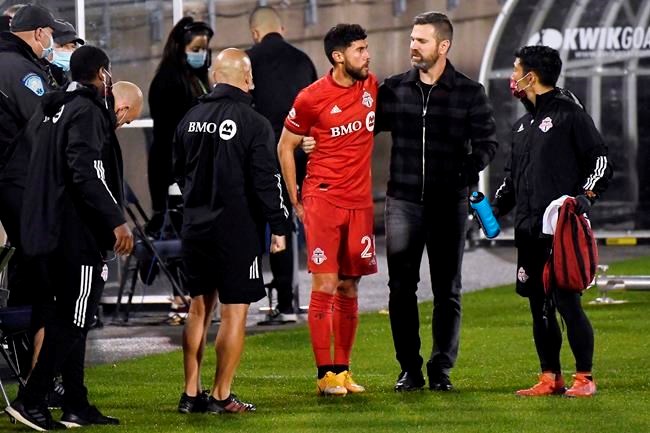 Nashville advanced in impressive fashion Friday, dispatching fellow expansion side Inter Miami CF 3-0. It joins the 1998 Chicago Fire as the only expansion team to win a playoff game. Bob Bradley's Chicago team went on to win the MLS Cup that year.

As the highest-ranked seed to survive the Eastern Conference play-in round, No. 7 Nashville faces No. 2 TFC on Tuesday before empty stands at Pratt and Whitney Stadium at Rentschler Field in East Hartford, Conn. No. 8 New England, which needed a 95th-minute Gustavo Bou goal to edge No. 9 Montreal 2-1 in the other play-in round game, visits No. 1 Philadelphia later Tuesday.

"They are a very organized team, very committed," Vanney said of Nashville on Saturday. "Every single one of them that's on the field is committed to the defensive work, getting behind the ball, getting numbers between the ball and the goal."

Walker Zimmerman, the MLS Defender of the Year, partners Dave Romney at centre back with Daniel Lovitz, who spent three seasons with Toronto after being taken in the second round (24th overall) of the 2014 SuperDraft. Canadian rookie Alistair Johnston slots in at fullback.

But Anibal Godoy, who usually shields the backline alongside captain Dax McCarty, left the Miami game with a suspected hamstring injury and will miss out Tuesday barring a miraculous recovery.

Toronto (13-5-5) finished 12 points ahead of Nashville (8-7-8) in the regular season. The two have never met with the pandemic-rejigged regular-season schedule offering little variety in a bid to reduce travel.

"It's nice, in some ways, to play somebody that you haven't played four or five times this year," Vanney said.

While Nashville is built on defence, its offence has been warming up at the right time. While it ranked 24th in the 26-team league in scoring at 1.04 goals a game during the regular-season, it has lost just once in its last eight games (5-1-2), outscoring the opposition 15-6 while posting three shutouts.

In contrast, injury-plagued Toronto lost three of its last four to close out the season.

Toronto has been training at home since the regular-season finale Nov. 8 when it was beaten 2-1 at the New York Red Bulls. Vanney says his roster is getting healthier, although he declined to give specifics.

"We're getting closer to full health," Vanney said. "We'll see … We're moving in the direction to have more bodies available than the last game, that's for sure."

In winning a playoff game, Nashville has accomplished in one season what it took 10 for Toronto to do. But more teams make the post-season these day — 18 this year compared to eight in Toronto's debut in 2007.

Vanney said he is taking his trademark scarf from the 2109 playoffs with him to Hartford. He wore it for three straight post-season victories — including indoors in Atlanta before taking it off because it was too hot — before his team fell 3-1 to Seattle in the MLS Cup final.

The scarf, a Burberry-like style with burgundy, light green and grey among its colour palate, was a 2017 gift from a family whom Vanney had met at his local Starbucks.

"It's packed up. We'll see if it gets the call or not," Vanney said.

This report by The Canadian Press was first published Nov. 21, 2020

Police look to contain rowdy Canadiens fans after win over Vegas to advance
Jun 25, 2021 2:36 AM
Comments