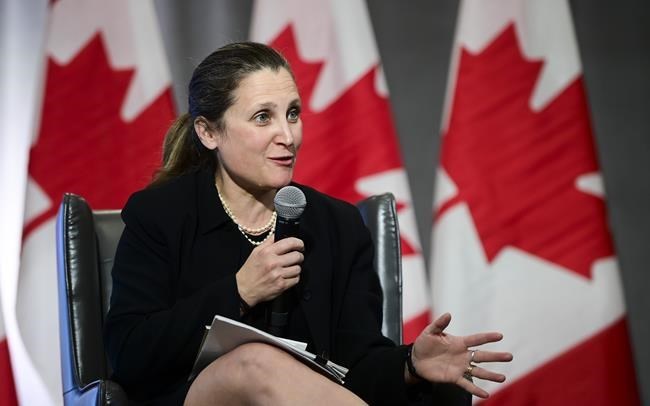 OTTAWA — The Trudeau Liberals' sweeping budget bill is moving faster to a final vote after the government successfully moved Monday to force an end to debate in the House of Commons, citing partisan shenanigans.

After getting support from the Bloc Québécois, the budget bill will now have 10 more hours of debate before MPs vote on the legislation, whose passage is intertwined with the fate of the minority Liberal government. Failure to pass would trigger a federal election.

Bill C-30 contains multiple measures from the April budget, including changes to business and worker supports.

Prior to the vote, Finance Minister Chrystia Freeland said the government was worried the bill won't pass before MPs pack up for the summer, causing aid measures to expire at the end of June just as the economy is reopening.

During a Monday morning news conference, government House leader Pablo Rodriguez blamed Conservative stall tactics for the delay in the budget bill and on three other pieces of legislation the Liberals want passed before parliamentarians head off on a summer break in just over one week.

The other bills are C-6, which would ban conversion therapy and is currently at third reading; C-10, which would amend the Broadcasting Act to make streaming services adhere to Canadian content regulation; and C-12, which would enact climate accountability legislation.

Conservatives argue C-6 is too broad and would prevent people from having conversations with faith leaders about their sexuality and C-10, the Tories say, would limit free speech online. As for C-12, Conservatives say activists were on a panel that advised the government on how to achieve net-zero emissions by 2050.

Conservative finance critic Ed Fast told the House of Commons that the official Opposition was doing its job to review what he called the largest intergenerational transfer of financial risk and debt.

"Why is it that (Freeland) doesn't want the Opposition to do its job? Our job is to hold the government accountable, to exercise scrutiny and oversight," Fast said.

"This is the biggest budget in Canadian history. The biggest debt — well over $1 trillion and heading towards $1.8 trillion — Canadians have never seen this."

Rodriguez said he didn't think sitting all summer would be helpful, similar to what MPs did last year during the first summer of COVID-19, adding he didn't think it would change the situation in the House of Commons.

Later Monday, the Commons passed a motion to extend sitting hours this week and next, in order to provide more time to push through the priority bills. The Conservatives voted against it.

Bloc House leader Alain Therrien said in a statement the party backed the budget-bill vote because it otherwise would have made it impossible to approve C-10 by the summer break, and provide financial help to Quebec's cultural sector that the legislation would provide.

While Rodriguez suggested MPs could just return in the fall, signs are increasingly pointing to a federal election sometime this fall that would reset the legislative agenda. MPs who aren't planning on running again are being given time this week to give a farewell address to the House of Commons.

Green MP Elizabeth May said while she was sympathetic about the need to pass C-30, she argued against limiting debate.

"This House exists to examine legislation, to take the time it takes to review it," she said during debate to invoke time limits.

"We seem to be under the false time pressure on many bills that an election is looming."

Freeland said the government has no desire for an election, but blamed political theatrics for bogging down the work of the House of Commons on reforms to the wage subsidy and recovery benefits.

"These measures run out this month and I strongly believe Canadians need that support," Freeland said.

NDP Leader Jagmeet Singh decried the Liberals' plan to force through Bill C-30 without fixing what he called an unnecessary cut to payments through the Canada Recovery Benefit with hundreds of thousands still out of work.

The budget bill contains provisions to reduce payments to $300 from $500 a week. Similar provisions are in place to wind down the wage subsidy.

Singh said the New Democrats plan to fight the decision, which could throw a wrench into the government's plea to the NDP and Bloc Québécois to help push their bills through the House of Commons.

Freeland said she hasn't seen anything to persuade her to alter course.

"When I look at both the situation with vaccines and with the level of contagion, as well as the economic indicators, right now today, I'm really comfortable with the measures we have in place and the plan we have in place," Freeland said.