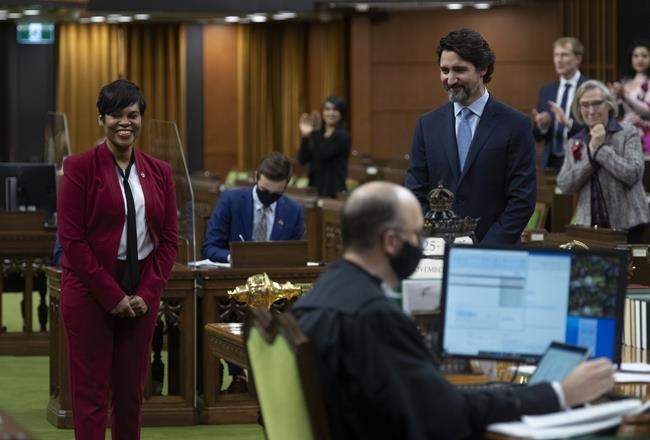 OTTAWA — Thousands of federal Liberals gathered online Thursday night for the start of a three-day national convention that promises to be downright dull compared to similar events held by the Conservative and New Democratic parties.

And that suits Liberals just fine.

They hope Canadians will see a governing party focused on the serious policy issues of the day — the COVID-19 pandemic, the economy, climate change, the social safety net, systemic racism —  without any of the infighting or controversy that beset the Conservatives' convention last month and that threatens to similarly dominate the NDP's convention this weekend.

Priority policy resolutions up for debate and votes at the Liberal gathering include calls for a universal basic income, enforceable national standards for long-term care homes and a green economic recovery.

While some of the ideas are relatively bold and not all Liberals agree on them, nothing on the agenda is as potentially damaging as the Conservatives' internal squabbling over the place of social conservatives in their midst or their refusal to accept a resolution that climate change is real.

Nothing is as potentially divisive as New Democrats' incipient fight over the definition of anti-Semitism or as radical as their proposed resolutions calling for abolition of the military and nationalization of major automakers.

The biggest buzz at the virtual Liberal event is likely to be around Mark Carney, the former governor of the Bank of Canada and the Bank of England, and whether his appearance at the convention signals an intention to finally take the plunge into partisan politics.

"It looks pretty tame, doesn't it?" rookie Toronto MP Marci Ien, one of the convention co-chairs, said in an interview.

Whereas the Conservative convention featured an attempted takeover by anti-abortion forces within the party, Ien said the Liberals will be talking about how the pandemic has hit women hardest and how to ensure an economic "she-covery."

They got their first taste of that Thursday night, during a conversation between Finance Minister Chrystia Freeland and former Liberal minister Ken Dryden, who managed to get all provinces to sign onto a national child care deal back in 2005, only to see it abandoned by the subsequent Conservative government.

Freeland telegraphed once again that funding for an early learning and child care program will be a centrepiece of her first budget, which she will deliver in just over a week.

"I really think, Ken, that now is the moment," she said. "We really need to get this done."

The pandemic has graphically demonstrated the cost of not having affordable child care, with the "incredibly dangerous drop" in women's participation in the labour force, she said.

"I am finance minister and I believe in (child care) because it is a surefire way to drive jobs and economic growth."

While the Conservatives voted against a resolution recognizing that climate change is real, the Liberals will hear from Carney, now the United Nations special envoy on climate action and finance, and multiple times from Canadian Heritage Minister Steven Guilbeault, a prominent environmentalist before jumping into politics, on what more needs to be done to combat the environmental crisis.

"It is nice to be part of a group that not only does not question the reality of climate change but also keeps pushing the envelope to do more, even faster," Guilbeault said in a speech Thursday, the first of several events he's scheduled to take part in.

Liberals also heard Thursday from Social Development Minister Ahmed Hussen, who reminded them of the hundreds of billions of dollars the government has spent to keep Canadians and businesses afloat during the pandemic.

He questioned whether the Conservatives under Erin O'Toole would have been equally willing to spend whatever it takes, for as long as it takes, to see the country through the crisis.

"My question to you again is: Who do you trust to have your back?" Hussen said, posing the ballot-box question Liberals undoubtedly hope would be on voters' minds should the minority Liberal government fall or provoke an election later this year.

Over the next two days, registered Liberals will hear about how to organize and fundraise for an election and how to run a campaign safely during the pandemic. Most of that advice, from various panels and workshops sprinkled throughout the convention, will not be for public consumption, except for one open session about running a virtual campaign with two Democrat organizers of last fall's U.S. presidential campaign.

The convention itself is entirely virtual, testing the party's ability to appeal to Canadians without the normal visuals or hoopla that are part of in-person conventions.

Opening night did not go off without a hitch. On the chat line on the convention website, many Liberals complained about technical problems: frozen screens, interrupted internet connections, audio that cut in and out.

One of the co-chairs hosting the opening events, British Columbia Liberal MP Terry Beech, was seen at one point on his mobile phone. He explained later that he was checking to see what was going on after hearing a commotion in the next room of his home.

He later appeared with his two young daughters sitting in his lap.

A number of Liberals on the chat line commented that they were attending their first convention, not having been able to afford the travel and hotel costs involved in previous in-person gatherings.

At least partly as a result of the virtual format, the party is boasting that this is the largest policy convention in its history, with more than 4,000 Liberals registered to take part.

It has also forced convention organizers to find innovative ways to engage the virtual delegates. Ien, who will host a conversation Friday evening with Carney, said she intends to use Instagram to solicit questions to put to the former central banker.

One question is undoubtedly top of mind with most Liberals: Will Carney run for the party in the next election?

"I'll ask him and let him know that there are many people inquiring, including you," Ien said.

This report by The Canadian Press was first published April 8, 2021.