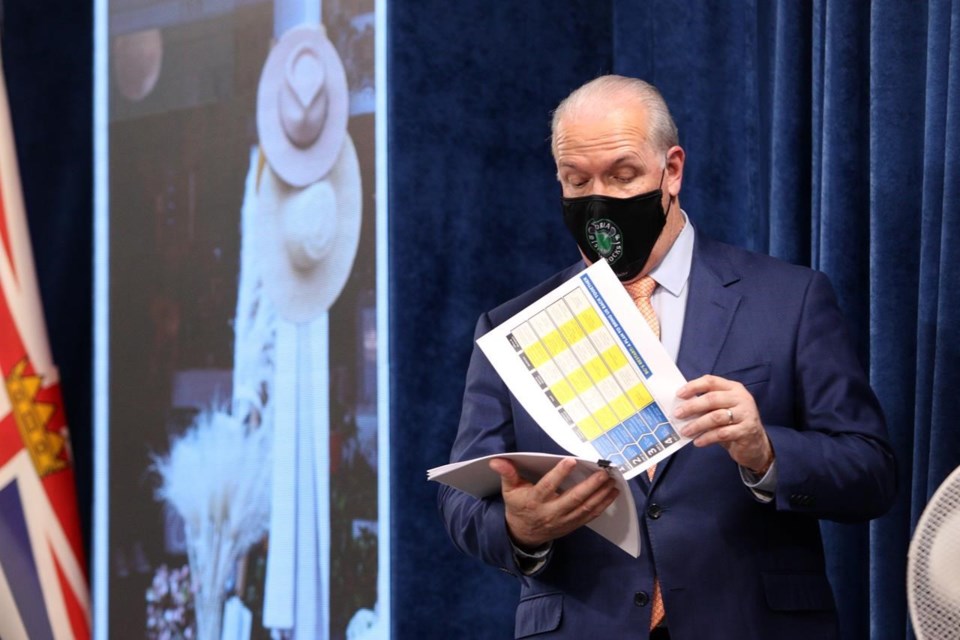 The province will take the next step forward in its restart plan announced last month, which aims to allow life to return to pre-pandemic times after Labour Day, he told a news conference on Monday.

Horgan said the plan is careful and safe, adding that the province will monitor COVID-19 case data and take guidance from provincial health officer Dr. Bonnie Henry as it approaches Canada Day, when the third step in the reopening plan is scheduled to take effect.

"Dr. Bonnie Henry's modelling shows we're on the right path," he said. "Case counts are declining, hospitalizations are stabilizing and vaccine rates are climbing at a positive rate. What we need to do now is take the next careful steps forward."

Henry said the reopening is based largely on B.C. exceeding targets for minimum vaccine levels, with more than 75 per cent of residents now having received their first shot. Health officials had set a 65 per cent first-dose vaccination rate to move to the second step of the reopening plan, she said.

The second step means indoor seated gatherings to a maximum of 50 people are permitted at venues including movie theatres, banquet halls and live theatre performances, Henry said. High-intensity indoor fitness classes can resume and bars will be able to serve liquor until midnight. Indoor faith gatherings to a maximum of 50 people or up to 10 per cent of the capacity of a place of worship will also be permitted.

But Henry said safety protocols, including mask wearing indoors and physical distancing, remain in place. Health officials will monitor COVID-19 case data as the date approaches for the next step in the reopening plan on July 1.

"We may need to slow going forward depending on what happens, and this next couple of weeks will be very key for that and right now the public health orders are still in place," she said.

Henry said she is confident B.C. will move onto steps three and four in the plan, but she will monitor COVID-19 transmission rates just in case.

"There are always things that are unknown," she said. "We are watching very carefully. I don't expect, with what we know now, we'll have to go back."

B.C. recorded 277 new cases over a three-day period, including 68 new infections on Monday, a case count not seen since last August. There were four more deaths, for a total of 1,734 fatalities since the start of the pandemic.

A joint statement released Monday from the provincial health officer and health minister said the government's target immunization rate is 100 per cent.

Henry said as first-dose vaccine rates reach 85 per cent and higher in B.C. and second shots also increase, the province will continue to better manage the virus and the return to normal will get closer.

"I am absolutely optimistic about our brighter days ahead," she said. "This will be our summer of hope and healing."