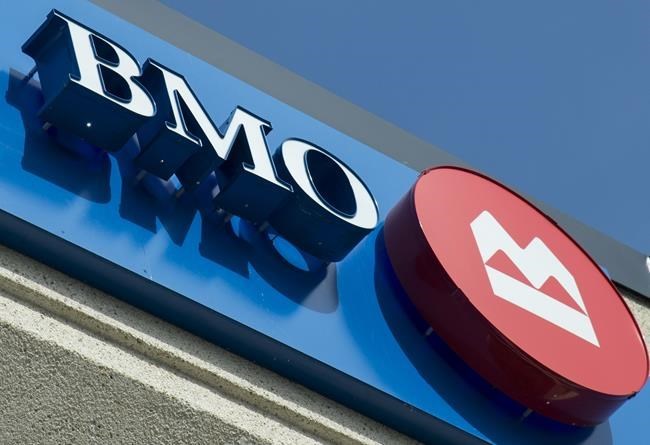 BMO Financial Group beat expectations as it reported its first-quarter profit was up compared with a year ago, before the pandemic began, as clients found ways to make their loan payments.

The bank's executives also said on Tuesday that U.S. clients are benefiting from a faster vaccine rollout compared with Canada.

The profit came as BMO's provisions for credit losses for the quarter amounted to $156 million, down from $349 million a year ago and $432 million in the fourth quarter of its 2020 financial year.

Cronin gave the example of a restaurant that was able to break even on revenue during lockdown restrictions through takeout, delivery, cost-cutting, government support and cash reserves.

"I wouldn't argue that they're thriving by any stretch. But you know, we're seeing real stability and in some cases, improvement in credit metrics, as they figure out ways to weather the storm. That's leading to fairly low loss rate."

Chief executive Darryl White noted that over 40 per cent of total bank earnings came from the U.S. segment of the business, calling it a key driver of future earnings growth. White said that the U.S. has made "good progress" on the rollout of the COVID-19 vaccine, and that the bank has raised its expectations for economic growth south of the border. The bank said that 43 per cent of total adjusted net income was from the U.S., 51 per cent was from Canada, and six per cent was from elsewhere.

Executives said that they are still positive on the Canadian business in the longer-term, but that Canada may "lag" the U.S. when it comes to the job market recovery amid a slower pace of vaccination.

Revenue for the quarter totalled nearly $6.98 billion, up from nearly $6.75 billion in the first quarter last year.

Analysts on average had expected an adjusted profit of $2.15 per share for the quarter, according to financial data firm Refinitiv.

Barclays analyst John Aiken said in a research note that the lower-than-forecast provisions underpinned a "very strong beat" for the bank's earnings, but noted that BMO's wealth management business also had a solid quarter and that the capital markets business was strong.

Net income from BMO's wealth management business rose 23 per cent from the same period a year ago, while capital markets net income rose 36 per cent, the quarterly financial report said.

White said the company is adding mortgage specialists to its staff, as well as growing the team for its online brokerages amid unprecedented demand and record transaction volumes.

But White also noted that the company is streamlining and digitizing branch operations. On the conference call, chief financial officer Tayfun Tuzun also said that controlling expenses remains an ongoing focus for the company, noting that some areas of the business had lower employee costs, partially offset by higher technology-related costs.

Despite the better-than-expected adjusted profits announced on Tuesday, Cronin noted that the bank is keeping an eye on new variants of COVID-19.

"A potential adverse case includes ... slower rollout of a vaccine that tips those borrowers that are barely hanging on into delinquency. Or, a worst case, where virus variants push us back into a situation that looks more like last March," Cronin said.

"Those aren't our base case. But the risk of those felt higher to us quarter-over-quarter."

Companies in this story: (TSX:BMO)