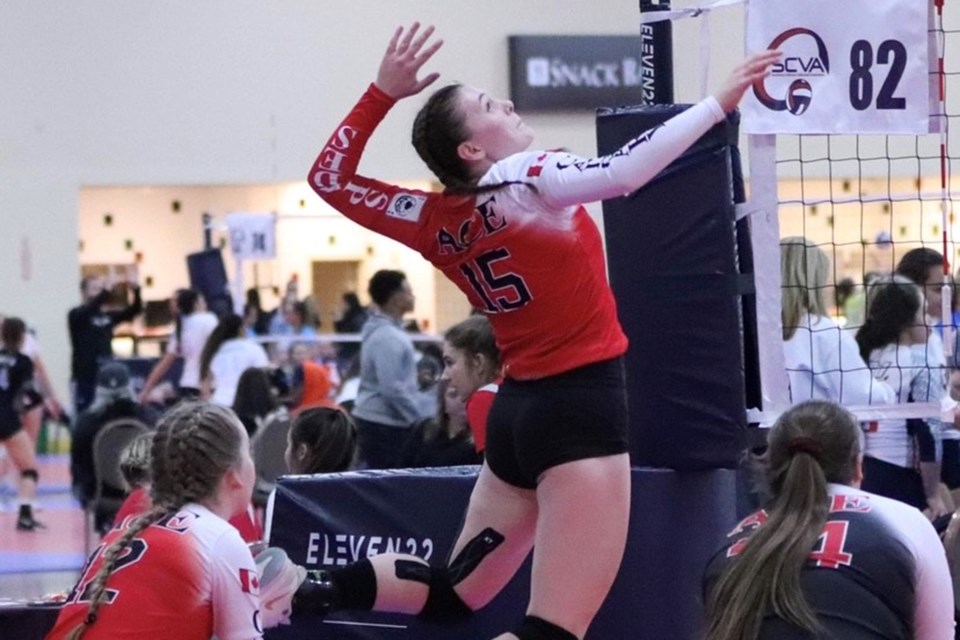 OLDS — Three new recruits from across Alberta and B.C. have joined the Olds College women’s volleyball team for the upcoming season.

They are Gracie Walls of Courtney, B.C., along with Alberta residents Kendyl Lengyel of Lethbridge and Sydney Spillman of Coaldale.

The program needed some new players because several key players graduated from the college at the end of the 2019-2020 season.

This past season was Rhonda Schmuland’s first as head coach of the Olds College Broncos women’s volleyball team.

During the past six months or so, she’s been working hard to recruit players to fill positions vacated by the team’s graduating players.

These three women help fill that gap and will hit the court with a solid core of returnees.

Walls is a left side-right side hitter who stands 5’11.

During the 2019-20 season, Walls was a member of the Mariners volleyball club.

In 2017 Walls was named most inspirational athlete during the B.C. provincial championships.

In 2018 and 2019, she was captain of the GP Vanier senior girls volleyball team.

This past season, her team took first place in the U17 VBC Island Super Series.

In 2019 they won the gold medal in Division 3 of the B.C. 18 U provincial championships.

In 2018, they won the Island Champions Club gold medal and the bronze medal during the B.C. Summer Games.

“We are excited to have Gracie join our program for the 2020-2021 season.” Schmuland said.

She said Walls’ “competitive attitude, desire for success, and experience” will help the Broncos to “compete at the highest level in the ACAC (Alberta Colleges Athletic Conference).

Wall is looking forward to the season.

“I'm really excited to take my game to the next level with the Broncos this season,” she said.

“I'm looking forward to building new relationships with my teammates and coaches, as well as my new community at Olds.”

Wall is enrolled in welding and business management.

In 2019 she was named the U17 volleyball nationals player of the wave.

During the 2019-20 season, she was a member of the LVC junior Kodiaks.

“We are looking forward to having Kendyl join us on the court this season,” Schmuland said.

“She brings with her a strong ability to read the game and a desire to help her teammates reach their full potential as she works towards reaching her own.”

Lengyel said she’s ready for the challenge to play the game at a higher level.

“I am excited to play post-secondary volleyball and be able to meet all new people in a place I have never been before,” she said.

Spillman, who stands 5’8, is another left side-right side hitter.

During the 2019-20 season, her club team was the Ace Volleyball Club’s Ace of Spades Red squad.

In 2020, Spillman was named female athlete of the year at Kate Andrews High School, as well as most valuable player on her senior girls volleyball team and Ace of Spades Red team.

In 2019 she was named team captain of the Kate Andrews senior girls volleyball team and for Ace club volleyball.

In 2019 Lengyel was named the Kate Andrews senior girls volleyball team’s most dedicated athlete of the year.

In 2019 her team won a silver medal at the Volleyball Alberta provincials.

Also that year, Lengyel was named most valuable player for the Kate Andrews High School track and field team.

She also won a bronze medal in 2019 during the high school zones in badminton.

“We are thrilled to be adding another multi-sport athlete to our program,” Schmuland said.

“Sydney comes to us having competed at a high level in softball, badminton, and track and field.

“Her athleticism and quiet determination will continue to add to the strong culture we are building at part of our women’s volleyball program.”

Lengyel is looking forward to the opportunity to play at the college level.

“I am super excited to be joining the Broncos for the amazing opportunity to continue my growth in the sport of volleyball while also pursuing my education,” she said.

Lengyel is enrolled in the business management and sports management programs at Olds College.

Information for this story was provided by Broncos Athletics.