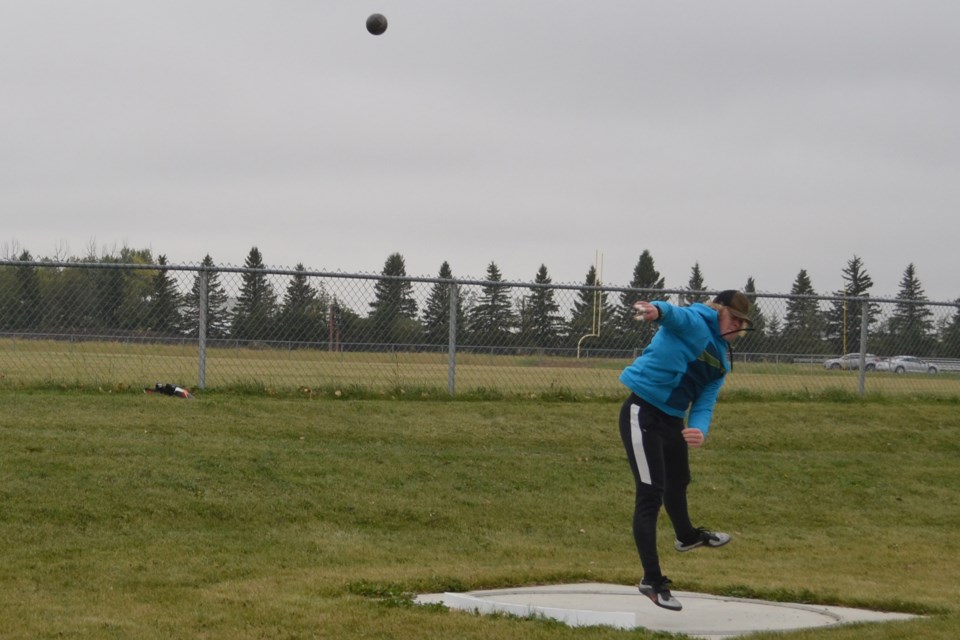 OLDS — Local discus thrower Rachel Andres is tied for No. 1 in the country in her age group and a youth she coaches is ranked No. 3 nationwide in shot put and No. 6 in discus.

Andres is pleased with her performance and that of the youth, Adam Jorgenson, 16, a Grade 10 student at École Olds High School.

As of last week, Andres, who also coaches the Velites track club in town, had thrown the discus 55.92 metres (m). That left her tied for first place in Canada among women in the open category (age 18-34).

“With COVID, I’ve taken my throwing form apart and started working on a lot of new things,” Andres wrote in an email.

“I didn’t quite hit the timing I needed today, but ended with a throw (that) has me currently tied for the No.1 spot in Canada.

“Obviously, after COVID shutting down all the goals for this year, I want to end this year strong with some new records broken.”

In an interview, Andres said the Canadian record for women in her age group is 62.72 m, a distance which hasn’t been bested in 41 years.

“I’ve kind of got my sights on that,” she said.

Andres is pretty confident she can break it this year.

After all, last year, she threw 58.44 m, a distance that just barely ranked her No. 2 in the country in her age group.

Last season, Andres was aiming to make the 2020 Canadian Olympic team. She was doing pretty well.

The Tokyo Olympics were postponed to 2022 and may be cancelled altogether if the disease persists.

The window for Andres to qualify for the Olympics again reopens in December.

“The marks I’m doing now are just kind of getting me ready,” Andres said. “I want to make something in 2020 and leave it with the Canadian record broken preferably.”

Although she attained second in Canada in her age group last season, Andres is confident she can keep her No. 1 ranking this year.

“Right now the distance is actually less than last year. But we’ve just got different people competing this year,” she said.

“So if I throw even close to the mark I did last year at the next competition we’ve got, I’ll be No. 1 by a couple of metres.”

Andres says that bodes well for him in the future.

“He’s at the very bottom of the age group this year so him being in the top 10 at all is very impressive,” she said.

When Jorgenson came out for track in Grade 9, his intention was to compete in discus and javelin.

However, Andres had other ideas.

She persuaded him to give shot put a try.

“Rachel looked at me and said, ‘hey, do shot put,’ and my whole entire rule in my head is do whatever the coach says I’ll do. So I went over to do some shot put,” Jorgenson said.

“She said was pretty good at it; I’m pretty much a natural at it, so I started practising more and more.”

He now practises shot put every noon hour and after school for another hour or two.

He too hopes to qualify for the Canadian Olympic team – or at least the junior team – one day.

“Since you can still perform track and field and get to the Olympics when you’re still in the military, I was planning on trying to do that,” he said.

The onset of COVID was frustrating for Jorgenson.

“Before COVID hit, I believe that I was going to (do) pretty well,” he said, adding he had visions of having a strong performance at the Legion track and field championships.

However, COVID-19 restrictions put a damper on those hopes.

“I didn’t really practise too much; couldn’t work out, couldn’t do anything like that,” Jorgenson said.

“So coming back into her, it’s a bit difficult, didn’t do too well in my last meet, but hey, I’m just starting (this new season).”

Jorgenson played down his top 10 rankings, noting there aren’t many guys in his age category in shot put or discus in Alberta.

Andres conceded that’s true, but there are lots of guys in that category in Ontario and Quebec, so she still considers his rankings to be a great accomplishment, with even better results to come.