Olds Junior A Grizzlys could be playing by mid-March: Coach 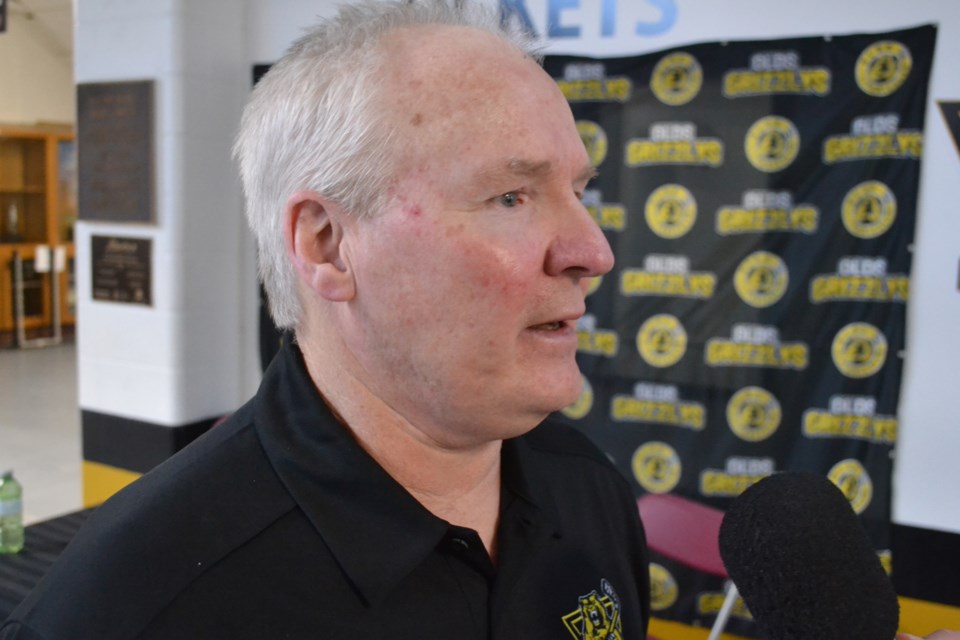 OLDS — If all goes well, the Olds Grizzlys could be back on the ice competing in the Alberta Junior Hockey League (AJHL) in a very shortened season by about mid-March.

A schedule of about 24 games, played on Fridays, Saturdays or Sundays is tentatively planned and expected to wrap up by about the end of May.

Players, coaches and support staff are currently self-isolating in preparation for training camp, which is scheduled to begin at the start of March.

Grizzlys head coach Scott Atkinson is pleased by the announcement, but notes there are still a lot of uncertainties in this process.

“First of all, it’s a fluid thing,” he said during an interview. “It’s already changed a bunch of times and the bottom line is no one knows what’s going to happen -- exactly what COVID restrictions are going to be at any particular date.”

He noted that as of late last week, Grizzlys players were still isolating at home. If all goes, well, he anticipated they’d be brought back to Olds earlier this week, where they’ll still likely have to remain isolated until full practice and eventual league play.

Atkinson said while it would be great to get back out on the ice, especially in league games, it’s not like he and the players have been doing nothing all this time.

As was reported before, members of the Grizzlys have been participating in daily training sessions via Zoom. Staff have also been busy recruiting players.

“You miss the game play," he said. “The players miss it more than me probably, but at the end of the day you just can’t do anything about it, so I don’t really fret about it – just take it as it comes, right?”

The key, he noted, is not to get too hyped up until the time is right.

“So just try to take it as it comes and keep trying to keep a routine and a schedule of training and continue to develop and just wait ‘till it becomes a reality.”

Over the past couple of weeks, the team announced the signing of a couple of players to letters of intent (LOI), including local product Kyle Venneman.

The club has made a point of recruiting local players when they meet their criteria for leadership, excellence and good community involvement.

He spent this past season with the Red Deer Optimist Chiefs U18 AAA team.

“He skates very well. We feel like he’s an elite skater and think he’s going to fit in,” Atkinson said.

“Our game plan is to build the best defensive corps in the league and they’ve got to be mobile and be able to organize the play and we think he can do that.”

“Kyle is an elite skating defenceman who has huge potential to produce offence from the back end,” a news release on the site said.

“His skating allows him to skate the puck out of trouble in the D zone and into the attack offensively. Kyle's great lateral movement with the puck allows him to find great passing lanes or to get shots through on net.”

Another defenceman, Dominique Cyr of Legal, Alta. also signed an LOI to play for the Grizzlys.

Cyr, born in 2004, is six feet tall and weighs about 175 pounds. Lately, he’s been playing with the Fort Saskatchewan Rangers U18 AAA team.

In three games this season, Cyr picked up one assist and eight penalty minutes.

The Grizzlys website had good things to say about him as well.

“Cyr is a player who we see as a tenacious defender, strong skater and a great first pass guy who will keep things nice and simple in our end of the ice," the site said.

“Dominique is the kind of character player we want. He plays with a very high compete level and is not afraid to make a hit, take a hit, block a shot or get into the fray.”

“Those guys are both really good teammates and really eager players, so (I’m) expecting them to contribute a lot to our team,” Atkinson said.