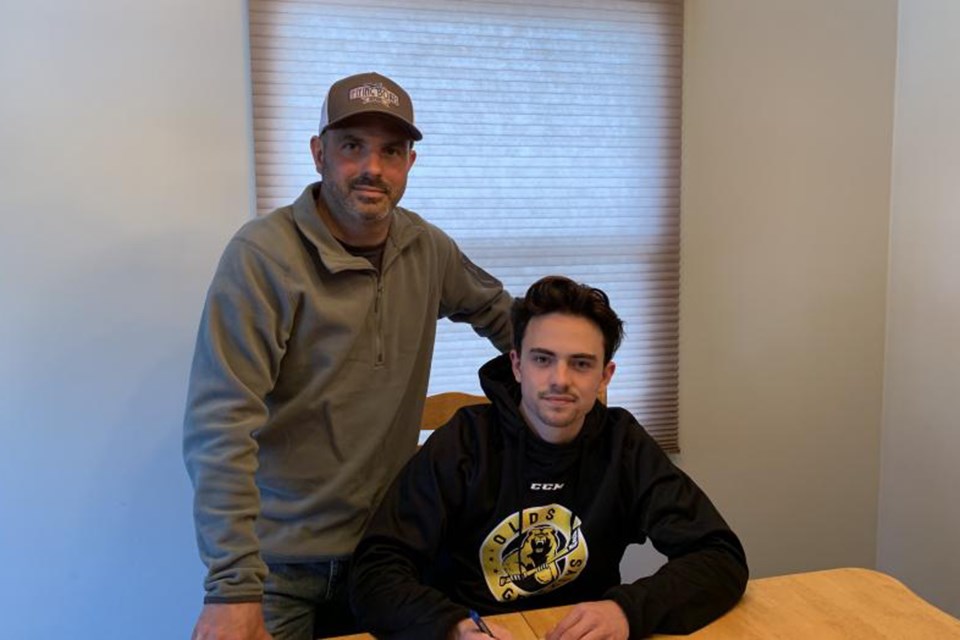 Innisfail product Kaleb Kremp signs a letter of intent to play for the Olds Grizzlys. Photo courtesy of Olds Grizzlys

OLDS — The Olds Grizzlys junior A hockey team has managed to make some moves, despite the COVID-19 lockdown.

The club has set tentative dates for hockey camps this summer, although whether they actually take place depends on whether Hockey Canada and various levels of government will allow that activity.

“Everything’s tentative, right? I mean, we’ve booked some ice so that we would have camps if it’s available, if we can do it,” Grizzlys head coach and GM Scott Atkinson said during an interview.

“It’s really uncharted territory, right? You kind of hope that things will open up, but also recognize you can’t open up ‘till it’s safe. We’ve got a bunch of contingency plans I guess, would be the way to put it. ”

The club has signed a few guys that Atkinson believes will address two goals: improve offensive output and team defence.

For example, they’ve inked Trenton Curtis, centre from Bethune, Sask., who racked up 51 points in 44 games while playing for the Tisdale Trojans of the Saskatchewan Major Midget League last season.

“He’s not huge, but he’s a bit bigger than that,” he said, estimating Curtis is more like about six feet tall, weighing about 170 pounds.

“We’re thinking that he’s going to be a guy that can be a little bit of a hub offensively,” Atkinson said.

Forward Nolan Price, born in 2003, has also signed a letter of intent (LOI) to play for the Grizzlys.

A native of Lethbridge Price stands 5’8”  and weighs about 165 pounds.

He played for the Lethbridge Midget AAA Hurricanes of the Alberta Major Hockey League last season.

Atkinson hasn’t had a chance to see him play yet, but he likes what he’s heard about the guy.

“Our scouting staff felt real comfortable committing to him. They think he’s got some offensive upside as well.”

Born in 2002, Kremp played for the for the Red Deer Optimist Chiefs. He was on the Grizzlys playoff roster last season and appeared in one regular season game.

“I really like that guy,” he said. “He’s a real hard working player.”

Atkinson sees Kremp’s role as more of a defensive forward.

“He’s not necessarily an offensive guy, but he can check well and kill penalties; real good character. We’re happy to have him.”

Atkinson notes that coming from Innisfail, Kemp is essentially a local player. He said he hopes to have five “localish” players this season (guys from Innisfail and the Mountain View County area).

All those players fit in with the team’s goal to recruit guys who can play virtually any position when called upon.

“Basically from a philosophical perspective, I sit more as positionless,” Atkinson said.

“I mean there’s goalies and everybody else and I think that if you take a look at how we’re building the team, it’s with that idea.

“To me there’s sort of a hybrid nature to the game now.”

He reiterated that the stress is on obtaining good quality guys that the team – and community -- can be proud of.

Another goal is to improve the compete level among individual players and the team as a whole.

“It’s sort of an attitudinal thing, right? I mean, there’s lots of good guys on our team and in the right environment, they might be able to flourish. But they have to understand that it’s a day-in, day-out, gotta-go-hard-every-day process.

And it’s a competitive environment. You’re not going to do well if you’re not willing to compete.

“I just think that’s a life skill that guys gotta learn. And they’re young kids, you’ve gotta give them an opportunity, but at some point in time you’ve gotta see it too, right?

“They’ve got to come here and do the same thing they’ve shown in the past or they won’t be here.”