No hurrying to get this curling season over in Carstairs 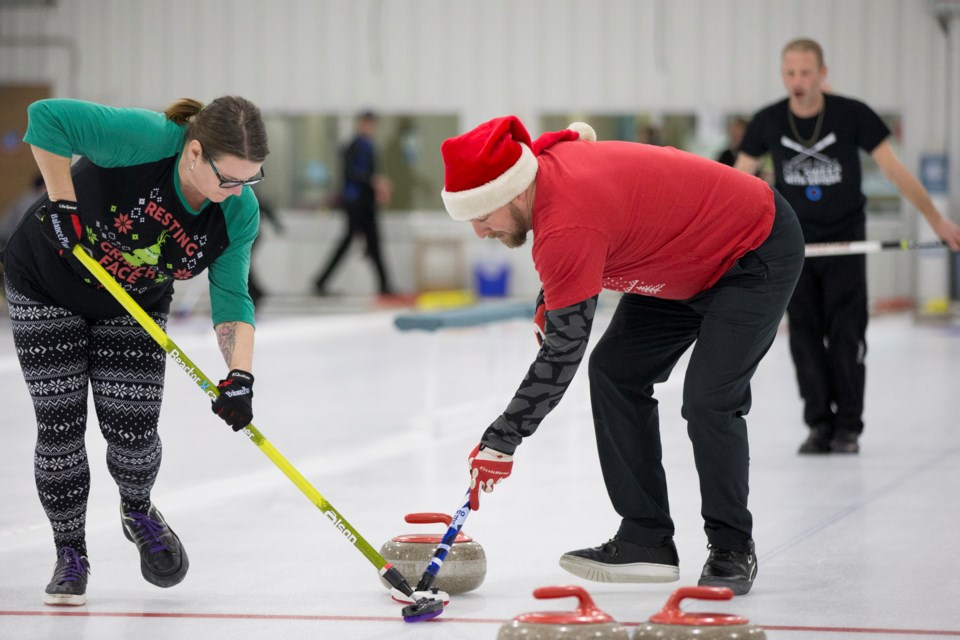 CARSTAIRS - Curlers of all ages are taking part in league and bonspiel play at the local rink.

The Carstairs Community Curling Club has over 160 curlers registered across several leagues right from senior sturling (stick curling) to the Little Rocks program, which starts at Grade 1.

Club vice-president Craig Vatcher expects the club to be up to 200 members by the end of the year, which is similar to previous years.

“It’s pretty consistent year after year,” said Vatcher. “It might be down a little, maybe 10 per cent, but not a huge reduction. A lot of that reduction is from the junior programs. The kids move on, the kids from Little Rocks move up.”

Leagues got up and going just before Halloween and go right through until the spring, said Vatcher.

“We have the same number of leagues as previous years,” he said. “Monday nights are our ladies' league, Tuesday night men’s, Thursday night mixed, and we have two daytime sturling leagues on Monday mornings and afternoons and Wednesday afternoons.”

The club has seven teams in ladies’ league, nine in the men’s league and 12 in the mixed league.

The sturling leagues have around 70 members, while the junior program has almost 40, he said.

“In Little Rocks they learn the basics like how to throw, how to slide properly out of the hack, how to sweep,” he said. “They use smaller rocks and have a temporary set of rings that are in the middle of the sheet so they don’t have to throw all 200 feet.”

Vatcher said the older juniors range in ability from brand new to the game right up to experienced players who will play in bonspiels against other towns.

“A lot of the older juniors will also play in our adult leagues in the evenings,” he said.

The club hosts a number of bonspiels throughout the year.

“We had a kickoff bonspiel in November that featured seven Carstairs teams and one Crossfield team,” he said. “That was a one-day event. We also had a legion sturling bonspiel recently.”

Coming up in January at the Carstairs rink is the grannies’ bonspiel on Jan. 4 followed by the mixed doubles' bonspiel from Jan. 10-12.

Later in January, February and March are the ladies', men’s, Elks’, and junior bonspiels.

Vatcher said the bonspiels mainly feature local teams but do have some representation from around the county and even from Calgary and area.

“It’s impossible to not have fun at a bonspiel no matter how your team does,” he said. “The ladies have a particular theme and have lots of costumes, the men’s is a bit more competitive, but we still have a lot of fun.”

Vatcher said the Elks’ bonspiel is a “prizes only” bonspiel as all the money left over goes back to the Carstairs junior program.

“The community really steps up,” he said. “It’s a lot of fun. We get a lot of prizes donated by local businesses. That’s pretty cool. Having the money go back to the juniors is an added bonus.”

The season wraps up with the mixed wind-up bonspiel on March 26-29 at the club. The event features karaoke, a potluck banquet, silent auction and more.

“It’s usually the most well attended bonspiel,” he said. “We tend to draw teams from other towns as we have our ice in later than most of our neighbours.”

Last year the club had the thrill of having the Russian men’s curling team come to practise in the facility last spring and play an exhibition game against Italy before they headed off to the World Championships in Lethbridge.

“It was a very exciting week for the club,” he said.

Vatcher said there have also been some significant upgrades to the club over the summer.

“All of the lights over the ice surface have been swapped out for energy efficient LED bulbs under an energy efficiency grant,” he said. “That was a great upgrade that cost us zero dollars. We’re already looking at fitting in some new coolers and freezers for the lounge and the kitchen under the grant as well.”

For more information or to see when events are please visit the club’s website at carstairscurlingclub.com.

Carstairs' Skyla Grenier ready for Winter Games
Jan 26, 2020 6:25 AM
Comments
We welcome your feedback and encourage you to share your thoughts on this story. We ask that you be respectful of others and their points of view, refrain from personal attacks and stay on topic. To learn about our commenting policies and how we moderate, please read our Community Guidelines.