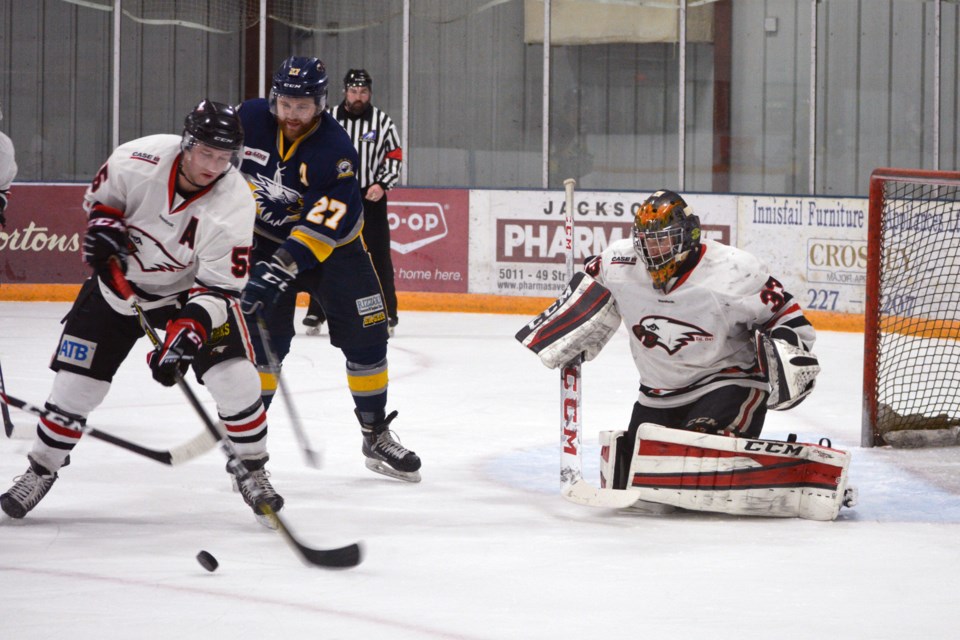 INNISFAIL – The Innisfail Eagles continue to dominate their namesake rival in the new year.

Following a 4-2 victory in their first game of 2020 on the road on Jan. 11, the Birds returned home and earned a 5-2 win over the Stony Plain Eagles on Saturday, Jan. 18 at the Innisfail Arena.

“We’ve played them five games and we won four. The game we lost we deserved to win,” said Brian Sutter, head coach.

“It was a big win,” he added. “Our goaltending was really good and you need your goaltending to be good in every situation. They got to be your best penalty killer and they made huge saves for us, especially in the second period and in the first.”

Innisfail took a 1-0 lead about five and a half minutes into the game thanks to a goal from forward Nick Noseworthy. Several minutes later Quinton Lisoway netted his first of two goals on the night with just under eight minutes remaining in the first frame. Just over a minute later, returning veteran Darren Reid made it 3-0 for the Birds.

Stony Plain got on the board with just four minutes left in the first period to make it 3-1 for Innisfail after 20 minutes.

Kyle Fraser and Allen York split Innisfail's goaltending duties in net Saturday, with Fraser between the pipes for two periods and York stepping in for the third.

Fraser played in his second game of the season and made 27 saves through two periods.

“This team just defends so well that they make Yorkie and my job pretty easy out there, just keeping everything to the outside,” said Fraser. “All the shots are coming from pretty far out thanks to our awesome defenders.”

There was no scoring in the second period, but Lisoway netted his second marker of the night, giving his team a 4-1 lead late in the third period, but Stony Plain answered back 50 seconds later to make it a 4-2 game.

After Stony Plain pulled their goalie in the dying minutes of the game, Innisfail newcomer Justin Faryna sealed the deal for Innisfail by scoring an empty net goal with 49 seconds remaining in regulation.

“We broke out of the zone together. A couple of guys made a couple of great plays. Colton Hayes ended up passing it over to me in front there, and I just slipped it through the five-hole,” said Reid of his goal.

He noted contributions from several new players on the team this season.

“They’re chipping in. They’re great players and they’re good assets to the club,” he said. “They definitely play good defensively and that’s what (Sutter) is asking of them, but they’re talented as well. They’re offensive and they work hard," Reid concluded.

The Eagles' next home game is Feb. 1. The Innisfail Eaglettes will showcase their skills during intermission. Puck drop is 8:15 p.m.

Mountain View Colts advance to second round of playoffs
Feb 19, 2020 2:20 PM
Comments
We welcome your feedback and encourage you to share your thoughts on this story. We ask that you be respectful of others and their points of view, refrain from personal attacks and stay on topic. To learn about our commenting policies and how we moderate, please read our Community Guidelines.