Locals include those from Innisfail, Didsbury, Sundre
Jan 4, 2020 2:30 PM By: Craig Lindsay 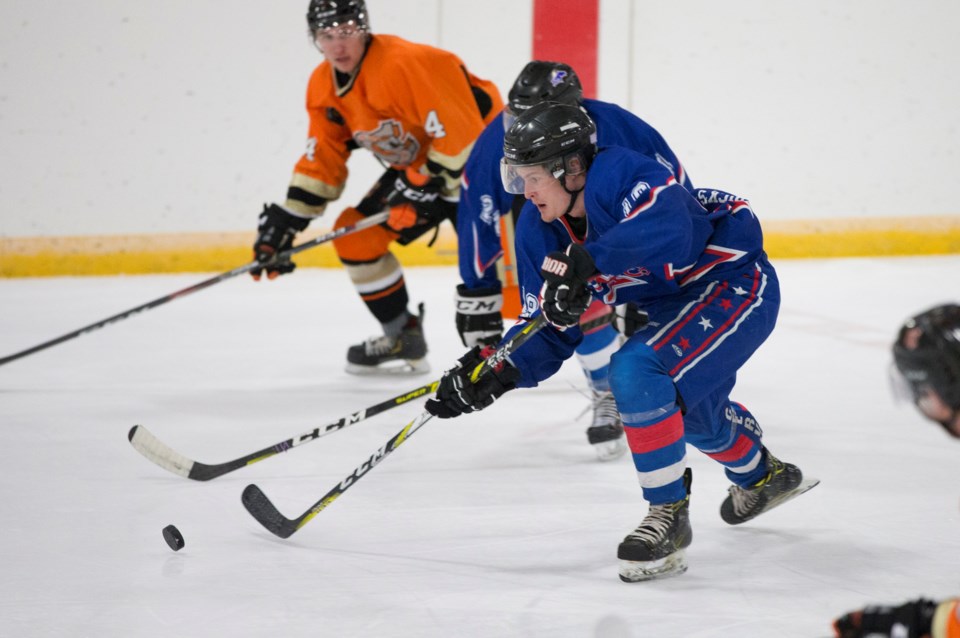 Mountain View Colts forward Josh Gette skates across centre during a recent game against the Coaldale Copperheads. Gette has been selected to play in tomorrow's all-star game. MVP Staff

DIDSBURY - The Mountain View Colts will be well represented at the Heritage League's prospects and all-star games tomorrow.

In total, six Colts players were chosen to play. Both games are Jan. 5 in Medicine Hat with the prospects playing at 1 p.m. and the all-stars at 4 p.m.

Selected for the prospects game, which features top players under 18, are forward Paton Rothenbusch from Didsbury, defenceman Tage Fawns from Didsbury, and forward Carter Layden from Sundre.

Selected for the league all-star game are forward Trey Wallace from Didsbury, forward Josh Gette from Innisfail, and forward Travis Gerrard from Saskatchewan.

"It means a lot to the team," said Olsen. "The three young guys in the prospects game, it's well deserved. It's the same with other teams; it's a showcase for 18 and under. I think it'll be good for them."

For the three veterans chosen for the all-star game, Olsen said it's a nice feather in their caps.

"They mean a lot to our team," he said. "Josh Gette is our leading scorer. Travis Gerrard is our second leading scorer. Trey Wallace has been, with Corbin Houchin being hurt for over a month, has really stepped up and is one of our top scoring defencemen. He's been playing really well and has been a great leader."

For Rothenbusch playing in his first year with his hometown Colts, being selected to the league prospects game is a big honour.

"It's good to get some exposure maybe to move up to the next level," said Rothenbusch. "I think it's a good time as well to get to know some of the other players from the league and to see how the north division stacks up with the south. It'll be nice to get that experience."

Rothenbusch, who had 10 points so far in the season in 19 games, expects the game to be pretty fast and entertaining.

"With all the young guys I think the energy will be very high," he said. "Hopefully we can mesh together well and find some chemistry."

Rothenbusch said he's enjoying his rookie campaign with the Colts.

"It's nice to play with the Colts," he said. "I watched them play when I was little and always looked up to them. Now I get to see the little kids looking up to me; it's pretty cool."

Rothenbusch said it took awhile to get used to the faster pace of the Heritage Junior B League.

"It took awhile to get used to the speed and bigger size of guys here but I feel I've settled in," he said.

"The last time we played together would've been tykes," he said. "It's pretty cool playing with my brother again. It's pretty fun to have him out there and be around him. He told me what to expect with the bigger guys and faster speed.

“He told me to just play my game and have fun out there."

Olsen and his coaching staff will be there as well as coaches for the Northern Division's prospects team due to the Colts being in second place at the selection deadline.

"It'll be a new experience for me," he said. "It's going to be exciting for us. I know my other coaches haven't been a part of it since they're first-year coaches.

“In all the years I coached previously with the Colts I never had the chance. The all-star game has only been back in the league the past three years, I think."