Thirty people from Knee Hill Valley and surrounding areas showed up to a town hall meeting for a chance to talk face to face with Red Deer County officials.Div. 4 Coun. David Hoar led the meeting while Div. 6 Coun.
Feb 15, 2011 12:00 AM By: Mountain View Today Staff 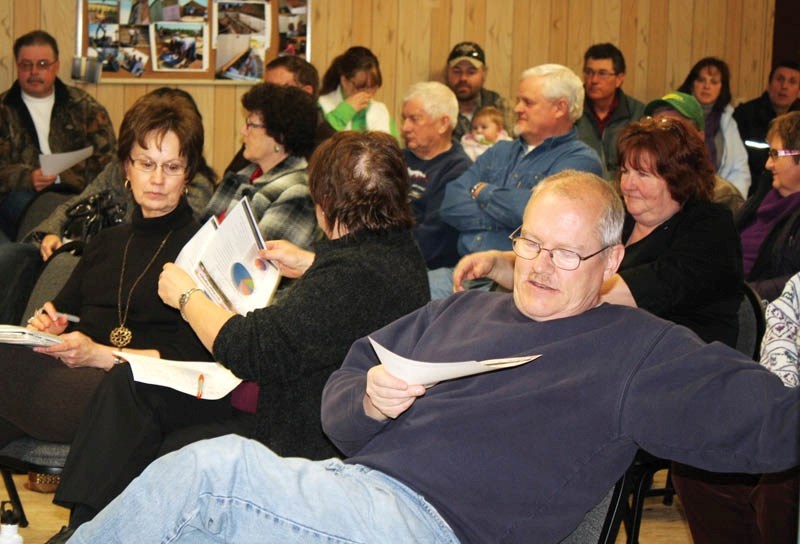 Thirty people from Knee Hill Valley and surrounding areas showed up to a town hall meeting for a chance to talk face to face with Red Deer County officials.Div. 4 Coun. David Hoar led the meeting while Div. 6 Coun. George Gehrke, county manager Curtis Herzberg and director of planning and development services Cynthia Cvik were also in attendance Thursday night at Knee Hill Valley Community Centre.Chief among concerns was council's initiative with the 2011 budget to spend $750,000 on a trail between Springbrook and Penhold.ìHave you talked to anyone who thinks it's a good idea?î questioned Jack Fiske, who estimates 75 per cent of the people in the area won't use the trail.ìUs hillbillies in the woods aren't going to use that trail,î Fiske said.Herzberg said four or five years ago consultants came in and asked for feedback from the community and trails were number one on their priority list.ìTrail users love 'em, county people hate 'em Ö but once we have them in place it doesn't cost a lot to maintain,î said Herzberg, who added that anyone can use them, even those without enough money to afford recreational activities.ìFarming equipment is getting too big for the bridges around here. Are there any thoughts on widening them?î asked Vern Schaefer.Bridge repair and road repair were other hard hitters. Herzberg explained most of the bridges in the county were built around the same time ñ 50 to 60 years ago ñ and are now all in need of repairs.He said it's something that has bounced between the responsibility of the municipality and province and hopes the province will continue to help pay for the expenses.ìThey are horrendously expensive to repair and that's why we're putting more away per year for bridge maintenance,î said Hoar. In the past, he said, $1 million a year was put into reserves for bridge maintenance ñ enough to fix two bridges. This year $5.5 million has been allocated for bridge repairs. Herzberg said traffic numbers would factor in determining which bridges need to be widened first.People asked when they could expect to see parts of their roads resurfaced, with some in such poor shape that they can't be driven down during the winter.ìEvery road in the county is rated,î said Hoar.ìIt's tough to determine ñ we let engineers say a lot about that,î said Herzberg.He also said the county will wait to look at solving problems of congestion within Gasoline Alley until after Alberta Transportation finishes its plan to redesign Highway 2 between the 32nd Street and McKenzie Road overpasses.The meeting lasted close to two hours with final questions focused on Plasco Energy Group and whether the county was being strung along.ìI believe if the federal government would say yes or no we'd have the construction begin,î said Hoar of the Plasco gasification plant, which is waiting on funding from the government before it starts construction. He said he doesn't blame the company for waiting to have funding in place.ìThe bottom line is we have to stop digging holes in the ground,î said Gehrke.The town hall meeting, the second of its kind since October's municipal elections, was part of a trial run for councillors to determine if there was enough interest from the public to continue the outreach.Hoar said council will discuss where to meet next, suggesting it would take place some time in the spring.