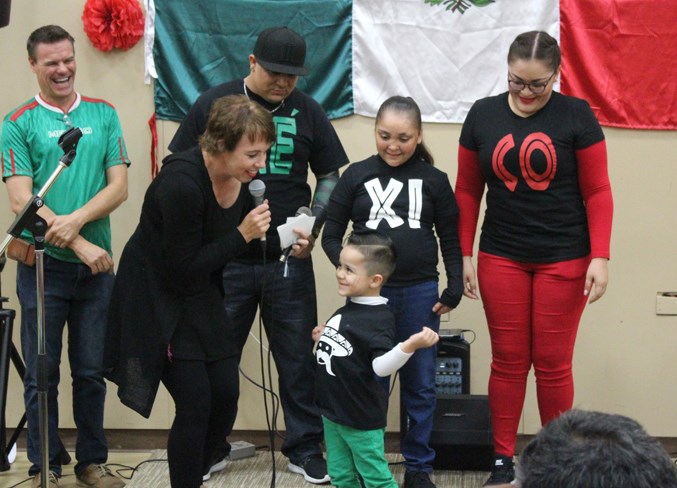 A youngster from Mexico &#8220;busts a move&#8221; at the Mexican Fiesta event at Zion Church on Sept. 15 with encouragement from Shelli and Greg Neufeld, front and left, and his family members.

DIDSBURY - "Viva Mexico!" was the chant on Sept. 15 at Zion Church as more than 400 people came out for a Mexican celebration during Mexico's independence day.

The evening, which was an opportunity to welcome  burn survivors of the ABC Daycare fire in Mexico to the community, featured authentic Mexican food, socializing, a mariachi band, games and several inspirational speeches led by headliner Joel Sonnenberg.

The children, 11 in total, and their parents and other family members raised money to make the trip and see Alberta. The children have also been participating in a therapy program run by Greg and Shelli Neufeld of Didsbury, who hosted the evening.

Greg Neufeld told the Gazette that he and his wife were thrilled by the turnout at the fiesta.

"September 15 is the night they celebrate Mexican independence day," said Neufeld. "Part of our plan, in addition to bringing a group of Mexicans to Canada, was to celebrate their independence day. So this event tonight was one where we wanted people to be able to have Mexican food, listen to Mexican music, and just have a great time together. We've packed the place. We're very grateful. It went really well."

Neufeld said he and his wife were working in Mexico as missionaries with the Evangelical Free Church of Canada at the time of the daycare fire, which took place in the city of Hermosillo on June 5, 2009.

"We were taking a group of youth to a (nearby) camp -- about 25 youth," he said. "We began to run into major traffic jams and ambulances and police running all over. Just general chaos. We didn't know what was going on. When we reached our camp we started receiving texts. I remember the first one said that 19 children were killed in a daycare fire. As we took that in, we're a Christian group, we started to pray for the families and ask God to help them."

Neufeld said the entire city of Hermosillo was in mourning. He and his wife decided to cut the retreat short and return to the city and see what they could do to help the survivors.

"We made sandwiches and brought them to the families in the hospital and prayed with them and tried to comfort them," he said. "That's when my wife, who is a recreation therapist and child life therapist, had more thoughts of what was going on. She realized there would be a need for continued care. She realized the media attention and all the support the families would receive would soon pass as all catastrophes do over time.

"She knew they would need help and continued surgeries through the coming years, so she tried to help as best she could. She was invited by a family to come into the hospital and help with one of the children who were burned."

Neufeld said there was a total of 49 children who ended up dying in the daycare fire. There were 19 who survived but were badly burned and several others with minor injuries, he said.

Shortly after, Shelli was asked by the state's minister of health to help with therapy for the surviving burn victims.

"Recreational therapy and child life therapy aren't degrees that are offered in Mexico yet," said Greg Neufeld. "So she was this gem there and she has a huge heart and cares for these kids. She was invited to come in to do therapy for the kids in the hospital right away."

Neufeld said his wife was given a room and material to do recreation therapy through games and through fun with the kids as they went through the pain and suffering that goes with all the skin grafting and surgeries that had to happen.

"Over the years that's continued," he said. "As the kids have grown we began to have day camps. We did that a couple of times a year for a few years. Four years ago we began having weekend camps. We as a family moved back to Canada to see our kids through high school. For a long time my wife dreamed of bringing all these kids to Canada to do a camp here and show them our country."

Neufeld said the families began fundraising a year ago to come to Canada to tour Central Alberta and participate in therapy camps.

"What an adventure it has been," he said. "We had to raise over $45,000 in total. We flew them all from Phoenix, Arizona, which is a seven-hour drive from their city in Mexico. We showed them Banff and different places in Canada. They'll spend four days coming up (Sept. 16-20) at the Little Red Camp west of Bowden. At that camp we'll have individual therapy for the children, group activities with the parents, and lots of fun activities."

The guest speaker at the Mexican Fiesta, Joel Sonnenberg, came to Didsbury from Fort Lauderdale, Fla. Sonnenberg gave an inspirational speech about how he overcame burns to 88 per cent of his body and was given a 10 per cent chance of survival by doctors. He told his story and asked audience members how they could make a difference in people's lives.

"He's a burn survivor," said Neufeld. "He was actually burned on this day (Sept. 15) 37 years ago. He was burned on 88 per cent of his body and almost died. He shared his story tonight. It was very inspirational."

Neufeld said the event, and the whole journey so far has been an amazing experience for him and his wife.

"We feel God called us to leave Canada and learn a new language, which is crazy enough, and to be in a place that some people might call dangerous and dirty to raise our children," he said. "But it turns out we're right in the place God wanted us for times like this.

"There is nothing more satisfying and fulfilling than helping others and to make a difference like our speaker, Joel, shared with us in his message about making a difference in the world."

COVID likely to kill thousands in Canada even with tough measures; job losses staggering
Apr 9, 2020 9:25 AM