'Urgent' move made to deal with railway safety 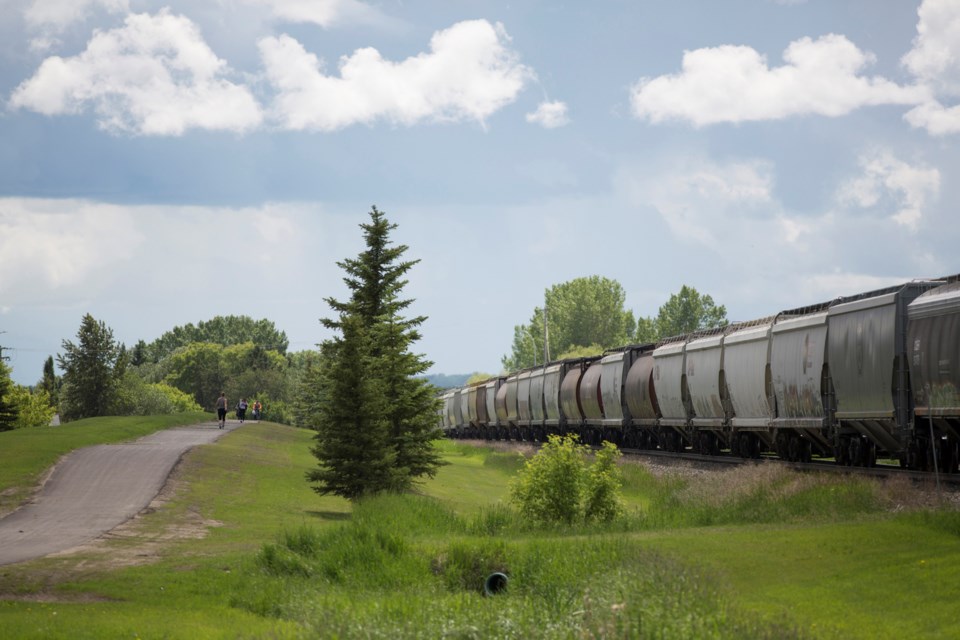 A train passes by the unregulated White Rock crossing area where children cross the rail tracks on their way to and from school. File photo/MVP Staff

The town's "urgent" wide-ranging rail crossing safety initiative, which will include research and analysis for a fully regulated pedestrian crossing and fencing along both sides of the CP rail track, could also see Innisfail becoming train whistle free.

"I see the crossing as the most urgent priority, and not a whole lot of alternatives. If that leads to Phase 2, some way of whistle cessation to help the rest of the town enjoy itself then so be it, but I personally believe that a pedestrian crossing there is a very high priority," said Coun. Gavin Bates following town council's Oct. 28 regular meeting. Bates added he wants council to consider an administrative plan, one that could cost hundreds of thousands of dollars, next year at the latest. "The sheer volume of trains we are seeing now, and a guarantee we will see more in the future, makes both the safety and whistle cessation issues more important than ever before."

The controversial rail safety issue has been festering in the town for most of the past year, with it reaching a crisis point late last spring when CP Rail officials attended local schools to urgently address their concerns to the young. Local RCMP and Town of Innisfail officials, as well as parents, were increasingly alarmed at the growing numbers of high-risk activities, including games of "chicken" with trains, reported around the well-used unregulated White Rock Crossing, just west of the Innisfail Schools Campus near the intersection of 52nd and 54th avenues.

At its Oct. 28 meeting, council was presented with a report from Gary Leith, the town’s manager of fire and protective services, that said while the town has increased enforcement with CP rail police, RCMP and municipal community peace officers, as well as working with the school boards to provide an educational program, the dangerous incidents along the line were continuing. His report also noted that council during its recent Strategic Plan discussions made rail safety a priority issue moving into 2020, and directed on Oct. 15 that $97,000 in FortisAlberta franchise fees be allocated to a Safe Community Reserve fund.

"I think the town knowing about this issue makes it even more imperative we find a solution for it. The last thing we want to see as Councillor Bates has said many times, is to see somebody getting hurt," said Coun. Jean Barclay. "There is a lot more rail track going though our community now than there was five years ago. We may see more in the future with oil by rail contract coming on stream potentially in 2020."

Council agreed unanimously on Oct. 28 it was an immediate priority to consider budget cost numbers for a pedestrian crossing, as well as a fence line to accommodate it. This research by administration will also ensure that whatever is recommended will meet CP rail's requirements. Council also directed administration to issue a request for proposals to get a consultant to help with a feasibility analysis on the train whistle cessation issue.

"Oh yes. ASAP. Let's get that done as soon as we can is my way of thinking. It is a definite obvious immediate safety issue and we have to respond to it," said Mayor Jim Romane, adding the only question now is the level of response the town can afford.

"Do you fence both sides? How much fencing do we need? And if you start talking about whistle cessation, well then you have to extend the fence further," said Romane, adding he was "guessing" at the cost but believes it would not be as high as many think.

As for the train whistle cessation issue, council was reminded a feasibility and engineering report was completed in 2007 but council at the time opted not to go forward due to cost and a lack of guarantee the whistles would cease.

However, with the number of trains having increased at least three- to fivefold since 2007, and with the likelihood of improved safety measures along the rail line that will dramatically reduce the danger risk to local residents, implementing whistle cessation now makes more sense for the community.

"If we have controlled locations where pedestrians cross, the potential is there to stop the whistle when coming through town," said Leith, adding until the feasibility is finished it's not known whether more than one safe pedestrian crossing should be completed. "The engineer will still if he (sees) somebody on the right-of-way will sound his horn, but right now he sounds his whistle because we have no other controls in place."

As far as when council will see recommendations from administration, no definitive timeline has yet been established, although it's recognized as a priority.

"It is too early to tell. We have started the process immediately. We started that today (Oct. 29) and with information we had prior to last night, so things are in motion to develop this research. I cannot pinpoint days right now when that will be delivered," said Todd Becker, the town's chief administrative officer, emphasizing the issue  is "clearly a priority of council, which is a priority of administration."

Innisfail house fire underlines need for smoke, carbon monoxide detectors
May 22, 2020 8:00 AM
Comments
We welcome your feedback and encourage you to share your thoughts. We ask that you be respectful of others and their points of view, refrain from personal attacks and stay on topic. To learn about our commenting policies and how we moderate, please read our Community Guidelines.