INNISFAIL - There will be a small one per cent electrical franchise fee hike in 2020 with new revenues of $97,282 tucked away in a Safe Community Reserve account to help cover anticipated costs to improve safety at the town's controversial railway cr
0
Oct 22, 2019 3:31 PM By: Johnnie Bachusky 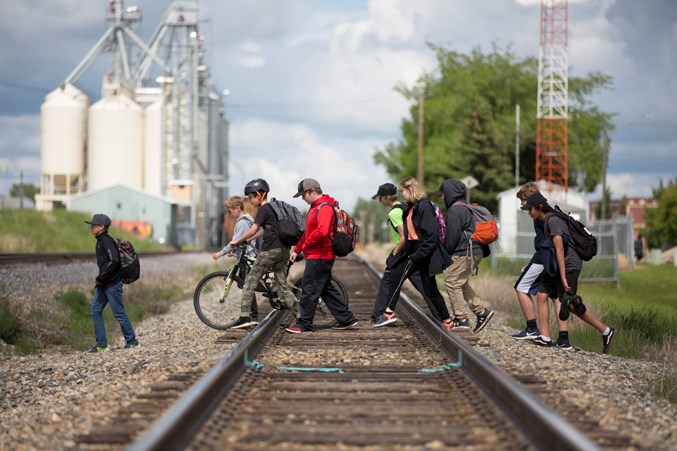 The town may soon unveil its plans to improve safety and security at the controversial unregulated White Rock train crossing near the Innisfail Schools Campus.

INNISFAIL - There will be a small one per cent electrical franchise fee hike in 2020 with new revenues of $97,282 tucked away in a Safe Community Reserve account to help cover anticipated costs to improve safety at the town's controversial railway crossing near the Innisfail Schools Campus.

"While council and administration have not held 2020 budget discussions, there have been conversations regarding railway crossings and the safety of pedestrians," said Heather Whymark, the town's corporate services director, in a report to council on the new 2020 FortisAlberta franchise fee rates. "Costs regarding railway safety have not been presented but know through strategic planning sessions that this need requires attention."

Council passed Whymark's recommendation for the FortisAlberta electrical franchise fee hike of one per cent, as well as a zero per cent hike for ATCO Gas. This is in sharp contrast to last year when council ordered a dramatic hike for both, a four per cent increase for ATCO and three per cent for FortisAlberta.

In the meantime, the $97,282 of new electrical franchise fee revenues establishes a plan for the town to be ready for possible and imminent large community safety expenses.

The town has been looking into railway crossing safety solutions since late spring of this year when it was reported to the province by town and local RCMP officials that dangerous potentially fatal "chicken game" incidents by local youth were increasing at an unregulated crossing area called White Rock Crossing, located near the intersection of 52nd and 54th avenues.

The town is expected to unveil a report on Oct. 28 at a regular council meeting that will detail potential safety and security measures, along with the costs to implement them. However, Todd Becker, the town's chief administrative officer, said there is a possibility that date could change.

"We are anticipating there will be some reporting but I need to see it," said Becker last week. "There has been administrative discussions anticipating the report but until I see it and say what my expectations are in my communications with council, I cannot 100 per cent guarantee that but that is what our aim is."

Although Becker would not release details of the report before council sees the report, he did say the town is looking at the safety of the rail right of way "in its entirety.

"And if council wants to invest in infrastructure that will really be up to them," said Becker. "Our goal is to present information to council to determine what level of a safety plan should be developed regarding the right of way."

As for the establishment of a Safe Community Reserve account, Coun. Gavin Bates, who opposed last year's big franchise fee increases for ATCO and FortisAlberta, supported this year's modest hike for FortisAlberta, as the revenues were going towards a specific project and not just into general revenues.

"It runs against my grain to tax utilities in that vein," said Bates, adding the town will have to address the issue of safe railway pedestrian crossings, as well as improved lighting around town.

Mayor Jim Romane noted that while council has yet to make any decision on what and how the town will improve safety at the contentious White Rock railway crossing, he conceded it is "definitely a priority for council" and the Safe Community Reserve does potentially give the town monies to invest to make the area safer.

"That is what (the reserve) is set up for," said Romane. "If and when we make a decision over what we are going to have to do we will have access to it if we need it."