The great Canadian game in an Innisfail backyard 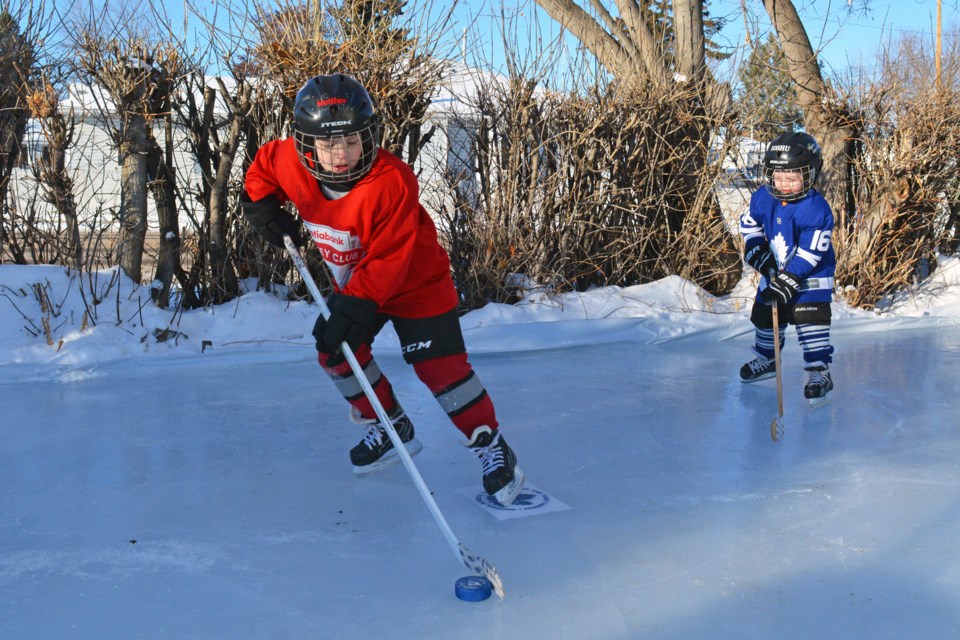 Matthew Teskey, left, is joined by his younger brother Joshua for a game of hockey on their backyard outdoor rink. The rink was constructed by their father Patrick. Kristine Jean/MVP Staff

INNISFAIL – Many Canadians have experienced the joy and excitement of playing hockey on an outdoor rink.

It’s an experience that Innisfail’s Patrick Teskey wants to give his two youngest sons.

“We had our two younger sons, Joshua and Mathew, involved in minor hockey,” said Teskey. “It’s just a way for them to have something to call their own. An area that’s at home and rather than go downstairs and watch TV or go play video games, they can go into our sunroom, put their gear on and walk out to the rink and stay out there as long as they want to.”

Teskey said although he never had an outdoor rink at home growing up, as an avid hockey and Toronto Maple Leafs fan it was something he wanted to share with his two youngest sons.

“I grew up in Toronto and I didn’t play hockey growing up, I was a downhill skier, but we had a pond pretty much across the street and down a ravine from our house,” he said. “Whenever the pond froze over we would go down and play hockey.

“I just want to give my kids the same opportunity,” he added.

The outdoor rink, about 40 feet in length by 14 feet wide, is named after Teskey’s grandfather, the "Frank Gus Teskey Gardens," and is adorned with a Toronto Maple Leaf logo at centre ice.

“When the time came to put a logo on there, it was just an added touch to name the rink after my grandfather,” said Teskey.

He first built a rink about six years ago and since then has expanded it and added features, including boards, foam core and spotlights for nighttime use.

Over the years, said Teskey, there’s been a growing online community through social media for backyard rink projects across North America.

They are just as popular here in Alberta as they are across the country, he noted.

“They’re a little more common out in Alberta than you actually think. There’s a lot of people that are doing it,” he said. “There’s a fair number that are involved with minor hockey in Innisfail that have a backyard rink or know somebody that does.”

They both love the sport and have enjoyed learning hockey and practising on their backyard outdoor rink.

“This year they’re both at the age where most days they’re going to want to be out on the rink, even if they’ve had a practice or a game. They’ll want to go back out on that rink just to skate because they love it,” he said.

Teskey said the outdoor rink will continue to be a family tradition for the foreseeable future.

“We’ll keep going with it as long as the kids want me to build one,” said Teskey. “Eventually I think it’s the kind of thing they’ll probably assist me in the construction as they get older.”