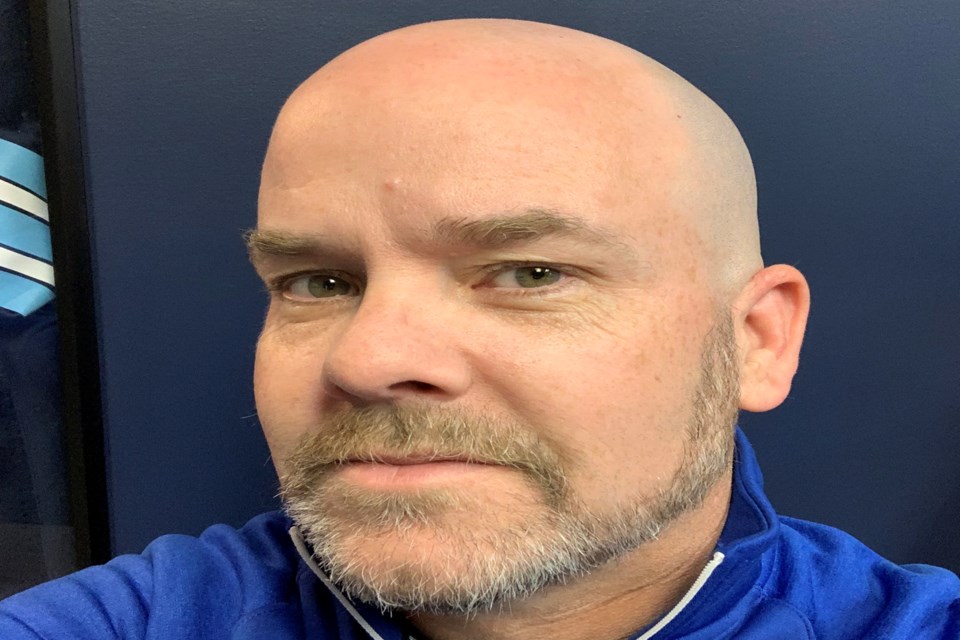 INNISFAIL – It was just over nine years ago when Patrick Teskey came to town from the Northwest Territories to become editor of the Innisfail Province newspaper.

He served in that role for nine months. It was hardly the end of his commitment to the town.

While Teskey accepted other jobs, he and his wife Michelle became huge contributors to the community, whether it be through sports organizations or as chair of the Innisfail Public Library board, or a performer with Innisfail Town Theatre. Teskey was all in for Innisfail.

And now at the age of 42, he wants to write a bigger story for himself and the community. Teskey is one of four candidates seeking the vacant seat on town council in the June 8 byelection.

“I want to make a difference in my community. We didn’t move to Innisfail to kind of sit back and not be involved,” said Teskey, noting his early friendships in town quickly led to new opportunities to contribute. “My wife Michelle and I believe that if you are involved with something, whether it be a community or sports team or a service group, you get involved.

“You don’t sit on the sidelines,” he added. “You step up to help out, and as much as you would want someone else’s mom or dad coaching your kid, sometimes you got to be the one to step up.”

Since leaving the Province in early 2012, Teskey has worked for Stantec in Red Deer for four years, and then with the Red Deer Regional Health Foundation until fall of last year when he was recruited to join the Alberta Sports Hall of Fame as the organization’s director of marketing and communications.

Like every other organization, the hall of fame has been hit hard by the current COVI-19 pandemic. With that current experience he can relate to what many businesses and agencies are going through.

“Our doors are shut but our offices are open and we are social distancing but we don’t have the public going through our doors. We don’t have money coming into the building,” said Teskey. “We are going to be in a tight spot going forward so I can definitely relate to what a lot of businesses are going through right now.”

Teskey is no stranger to a public health crisis. He lived in Toronto during the SARS pandemic in 2003, which resulted in more than 8,000 cases and affected 26 countries, one of which was Canada.

With the current COVID-19 pandemic, he knows many businesses in town are facing the ultimate challenge, with many unable to pay the bills and almost all encountering desperation at every turn. If elected he promises to “get up to speed” immediately on every situation and look at every opportunity available for solutions.

“I think the biggest thing right now is that the town has got to work with the chamber and with local business leaders and politicians to figure out how we are going to help these businesses, how we are going to encourage the many small businesses, the mom and pop shops, and to help them get back on their feet and stay in town,” said Teskey, noting the town has wisely committed itself to the 13 Ways initiative as a hopeful guide to move forward.

He also noted that the town already has many smart people working on council and in administration.

Teskey added another huge potentially beneficial issue for the town is that it already has a great deal of land earmarked for industrial development. He firmly believes the town needs to continue to market itself as a premier locale for larger industrial companies.

“We are going to have a challenge in encouraging smaller businesses to set up here because down the road we have Red Deer and Olds nearby,” said Teskey. “But there is a reason why families like mine choose to live in Innisfail and stay here, and it’s because of the fact it is a great community.”

For more on Patrick Teskey and his byelection campaign see his page on Facebook.