Owner meets with town officials and RCMP to discuss strategy
Jul 7, 2020 10:30 AM By: Johnnie Bachusky 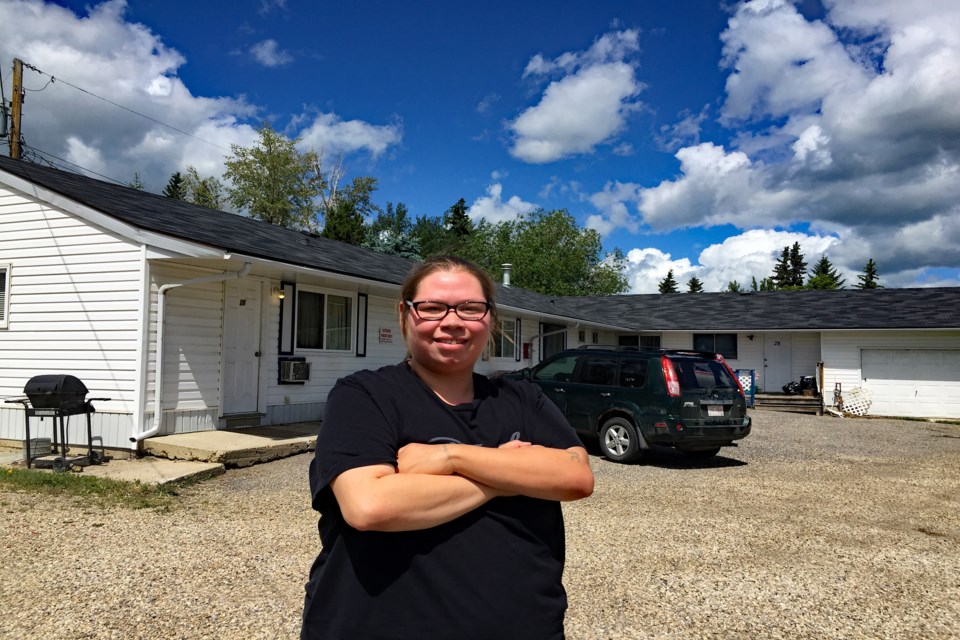 Bluebird Motel guest Chantel Giroux, who has been at the motel for the past month, was pleased to learn owners are working with the town and RCMP with a renewed focus to be vigilant on security. Johnnie Bachusky/MVP Staff

INNISFAIL — Troublemakers thinking of coming to the Bluebird Motel are now facing stepped up vigilance against violence and unruly behavior.

Motel owners had a sit down in Innisfail with senior town officials and local RCMP on June 28. Promises were made that rules and regulations to deter criminal activity and rowdiness, which had been posted for several years, will now be strictly enforced.

“It was very positive and we are going to work diligently with the owner of the Bluebird to try and curb some of the activities that are going on there,” said Innisfail RCMP Sgt. Lori Eiler, who attended the meeting with detachment commander Sgt. Chris Matechuk, town CAO Todd Becker and local fire chief Gary Leith.

“We came up with a few plans together and he (owner) has implemented them. He sent me some information to let me know he updated their policies and procedures, the way they are doing their bookings.

Last month, Eiler gave a blistering verbal public report to council on RCMP concerns at the half-century, eastside 50-room motel, detailing widespread illicit drug use, violence, excessive alcohol consumption, multiple sudden deaths and a hangout for out-of-town undesirables to engage in criminal activity. The motel last made major headlines for crime on April 29 as the location for the homicide of a 38-year-old man. RCMP is still probing the case.

Eiler told council that calls for service from the Bluebird are three to 16 times higher than ones from all other local hospitality businesses.

Bluebird co-owner Vas Shetty, who attended the meeting, said last week he and partner Veera Murthy were willing to listen and find solutions to the ongoing problems.

Last weekend, The Albertan attended the motel and new rules and regulation notices for guests were posted in the lobby as well as in every suite.

The updated notice of rules includes:

Murthy pointed out the motel has an extensive video surveillance system. He said motel staff was briefed on the renewed vigilance on motel rules.

“It will be our policy that no ID, no room. Any bad guys with no IDs are out,” he said.

He added that staff have been told to call police immediately if any guest is being unruly.

“We have told staff that if they are uncomfortable with any client, to call the police. They will come immediately,” he said. “Our priority is safety for the staff here, and the customers.”

Valarosa pathway funding approved
Aug 3, 2020 12:00 PM
Comments
We welcome your feedback and encourage you to share your thoughts. We ask that you be respectful of others and their points of view, refrain from personal attacks and stay on topic. To learn about our commenting policies and how we moderate, please read our Community Guidelines.