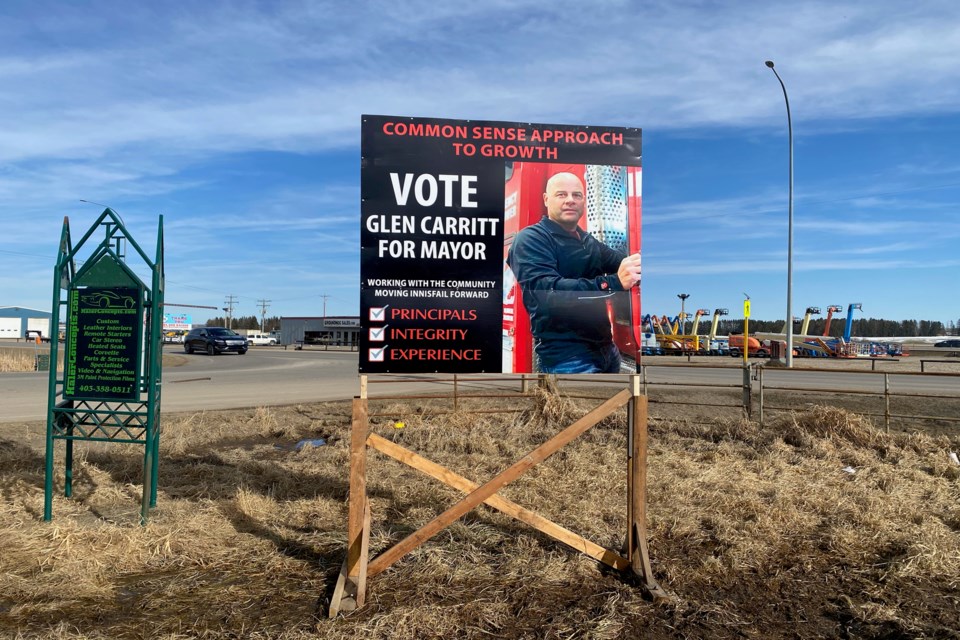 A municipal election sign put up on the east side of Innisfail for mayoralty candidate Glen Carritt. The town's Election Sign Policy has now been ruled unenforceable by a lawyer. Town council may soon decide to turn it into bylaw form in order to make it legal and have enforcement measures. Submitted photo

INNISFAIL – The town’s divisive election sign controversy is now up to council to fix.

The current election signs scattered about town can remain on private property because the town’s lawyer told administration on March 16 the current Election Sign Policy is not enforceable.

However, council will be told, likely at its next regular council meeting on March 22, that it can amend its election bylaw to make the sign policy enforceable.

“It’s going to turn into a gong show here. This is just ridiculous,” said Romane. “It’s generally bad for the visibility and exposure for the whole community to have a bunch of signs up for six bloody months. It is not necessary, no."

Heather Whymark, the town’s director of corporate services and assigned returning officer for the Oct. 18 general municipal election, said she was told by the town’s lawyer’s ruling on the Election Sign Policy forces the town to look for new measures, if that is what council wants to do.

“The policy that is in place is done strictly on good behaviour, and trying to comply with it if you choose to,” said Whymark, noting the town has the right to enforce placement of election signs on municipal property but not private. “If you have a sign on private property at this point in time, I do not have a legal right or enforcement component to deal with that.”

The issue caught the attention of both the town and concerned citizens last weekend when mayoralty candidate Glen Carritt publicly announced on social media he was heading out with a team to place election signs in the community.

The news touched off heated online debates and commentary, which included Carritt’s insistence that staff and council gave approval for early election sign installation at a council meeting last Dec. 14 when council was asked by administration to approve an updated Election Bylaw to conform with the province’s Local Authorities Election Act. The updated provincial legislation now allows candidate campaigns to start more than nine months before the Oct. 10 general municipal election.

“They were tardy to get the policy and changed and now they are scrambling because they got one call about my sign,” said Carritt in a text to The Albertan. He declined to answer to a question if he would still keep his election signs up.

Council was told last December it had to decide what it wanted to do with its Election Sign Policy that was last updated in 2017. The policy states election signs can only go up 45 days before the election. However, Carritt opted last weekend to put up his mayoralty signs, and they can remain in place, at least temporarily.

“If a bylaw comes into place regarding election signs it will have an enforcement component. I certainly will give them that as an option,” said Whymark, adding she does not expect the town will be stuck with legal costs as her call to the lawyer was only a “five-minute conversation.

“That’s all it was. Does the policy have an enforcement component? No, it does not, nor can it have one. A policy is strictly a guideline.”

In the meantime, Whymark said there has not yet been excessive staff time put into the election sign controversy but there soon will be.

“Should a bylaw be required they are a little bit more work and things need to be done differently and be concise as to the parameters, should they not comply, how that rolls out,” said Whymark.

With the next regular council meeting scheduled for March 22, Whymark said there is not enough time to prepare a full presentation. However, she said a verbal report, along with feedback and direction from council, can be made.

“I am scrambling to get done what I need and to be ready,” she said, adding a more comprehensive presentation, which could include a bylaw proposal, will be ready for the scheduled April 12 regular council meeting. “I will have an idea from them where they want to go but it will be April 12 before I can bring back something to get an actual resolution on.”

In the meantime, other councillors are already supporting a move for the Election Sign Policy to be beefed up with enforcement measures in bylaw form.

Coun. Jean Barclay, who is also running for mayor in the October election, said from the feedback she has received it’s her view most Innisfailians do not want to see election signs up all over town for the next seven months.

“If that is what we have to do to get people to comply with the Election Sign Policy then we will have to change it to a bylaw,” she said.

Coun. Don Harrison, who is seeking re-election in October, said the intent of the current Election Sign Policy was not to put them up until 45 days prior to the election. He said that timeline is sufficient for a candidates’ sign program as there are other ways they can campaign. Harrison added having signs placed all over the community presents many problems, including falling out of place and constant maintenance.

“That’s a big job to maintain as per the bylaw,” he said. “Forty-five days is lots and I will certainly be pushing for that.”