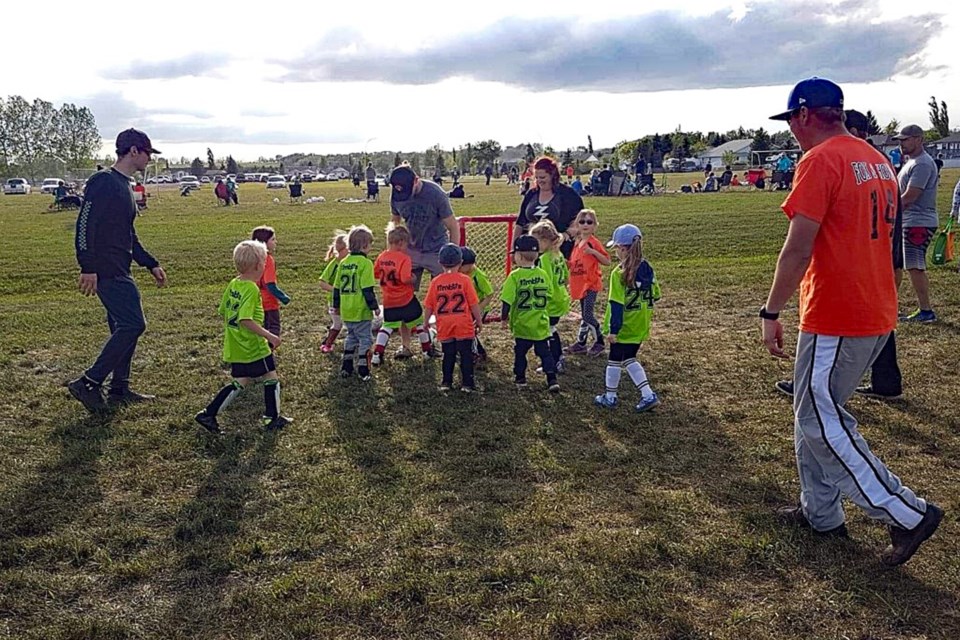 After an absence of play since 2019, the Innisfail Minor Soccer Association will have a modified season for its young players beginning May 11. Submitted photo

INNISFAIL – Scores of young children will soon be racing to the pitch for a game of soccer.

With last year cancelled due to the COVID-19 pandemic, it will be the first time the kids of the Innisfail Minor Soccer Association (IMSA) will have played the beautiful game since the spring of 2019.

Courtney Ukrainetz, president of the IMSA, said the association’s six-member board decided this month it was important to have a season for Innisfail’s soccer-loving kids, although it will be far different from the ones of the past.

“Last year we ultimately made the decision to not run a season because it was too complicated as things were so new. But this year we think it’s important,” said Ukrainetz. “It was an easier decision to cancel the season last year because we thought it would be quite temporary, whereas now we are over a year into this and we thought it was important to adapt and evolve rather than lose the interest or even lose our association entirely if we didn’t have any income for multiple years.”

For the upcoming season, Ukrainetz said last week the association had 76 kids registered, which is down considerably from a typical season of up to 200 players.

Due to current provincial COVID restrictions, the 2021 season, which is scheduled to start May 11 and run until June 29, will be significantly modified with multiple training groups instead of typical teams, she said.

The association is using the soccer field behind the Arena, which has been their home base for play since 2019.

The association met with town officials on April 19 to let them know the field space they needed to run their season, as it is “very different” from normal, she said.

The IMSA soccer field will be divided up into six squares or training areas with each measuring about 25 by 20 metres. Each square must be at least three metres from another training group.

“They just have to practice and play against themselves,” she said, adding it is anticipated there will be a total of 12 training groups that will be run on two separate time slots on Tuesdays and Thursday evenings.