Innisfail ready to hand out its Oscar Award

Young Innisfailian is this year’s star at the Innisfail Green and Clean Challenge
May 14, 2021 2:00 PM By: Johnnie Bachusky 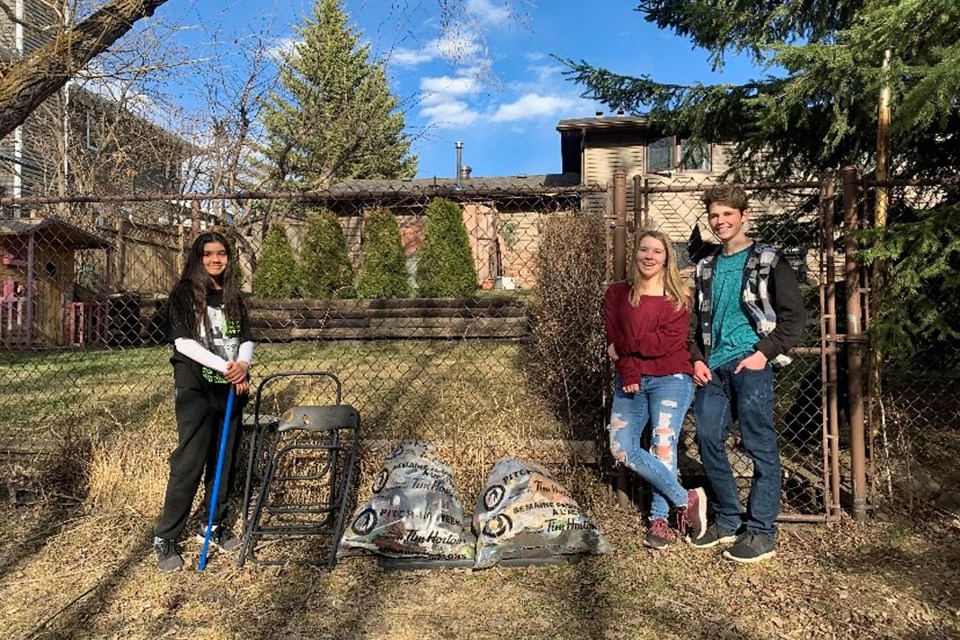 Young volunteers help out at this year's Innisfail Green and Clean Challenge. From left to right is Sophie Bergeron, Olivia Bergeron and Liam Hansford. Submitted photo

INNISFAIL – The town will soon be handing out its own Oscar Award.

There won’t be any red-carpet flair to it, however, but every community-minded citizen involved has earned to right to walk it.

Innisfail’s Oscar is given annually to the winner of the Innisfail Green and Clean Challenge, a week-long spring event when volunteers hit the town’s green spaces and parks and clean up the litter and debris that was spilled over and tossed about during the winter season. When the snow melts, the town’s Innisfail Green and Clean Challenge is rolled out.

Kane Williams, the town’s recreation program coordinator, said an annual clean up of the town has actually been going on for many years but in 2018 it was decided to put some flair into the event.

“It is such a tough thing to try and make it exciting, to do community clean-up work. There are some people who will jump right in and they will want to be part of it but we were kind of seeing limited success with some of it. It was difficult,” said Williams, adding the idea to have a community challenge and Innisfail’s very own Oscar was first conceived in 2018 through a “brain storming" session.

“We had a brain storming session with some of the recreation staff at town office and they said, ‘why don’t we give away a trophy?’ Somebody mentioned it was Oscar season, and then, ‘What if we got Oscar the Grouch to be part of this? Because Oscar does live in a garbage can, right?”

Oscar the Grouch is the furry, green Grouch who lives in a trash can on Sesame Street. The story goes that Oscar is rarely seen outside his garbage can because he actually loves his garbage.

“It seemed a little bit fitting that if you are doing community clean-up work, and it is a little tongue and cheek, you are picking up litter and you win an Oscar. But hey, everybody loves Oscar. He’s grouchy but deep down he’s a good guy,” said Williams.

This year’s Innisfail Green and Clean Challenge, sponsored by Innisfail Dairy Queen and Environmental 360 Solutions from Red Deer, went ahead from April 19 – 26th with 44 volunteers. They were each given a kit, which included garbage bag, mask, gloves and other items. Volunteers were given the option of designating an area or green space in town.

“At their leisure they and their household get together and cleaned it up,” said Williams, noting all garbage was disposed in a large bin.  “It’s to help Innisfail look its best. We have a lot of amazing green spaces in town. And after winter, just because of the nature of snow and people not always picking up after themselves, there is a lot left behind after the snow has melted.”

When it was over the volunteers, who not only did a stellar job cleaning up the town, logged in about 100 hours. All volunteers received a $10 gift certificate from Innisfail Dairy Queen.

And then the Oscar winner was proclaimed. This year it’s 12-year-old Liam Williams, who had been cleaning up the trails along Napoleon Lake before anybody even asked if he wanted to be part of this year’s challenge.

“Liam was the volunteer who contributed the most hours this year and will be recognized with our Oscar trophy,” said Williams. “He was a volunteer who was doing it selflessly.”

The town will be hosting a special Oscar winning ceremony for Liam later this month.