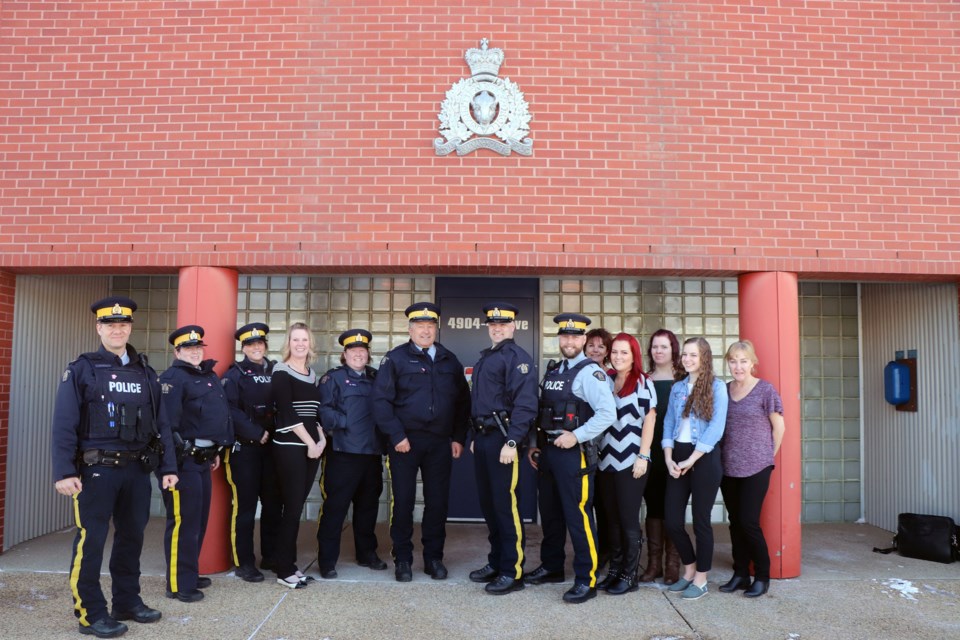 Innisfail RCMP and the detachment's support staff, led by Staff Sgt. Chris Matechuk (left-centre) and Const. Craig Nelson (right-centre) wear their new pink shirt pins to support Pink Shirt Day on Feb. 26. It is a day for people to come together by wearing pink shirts to school or work to show they are against bullying. Johnnie Bachusky/MVP Staff photo

INNISFAIL – The town’s police officers have seized a special way to join the community on Pink Shirt Day.

RCMP regulations don’t allow them to wear a pink shirt so members are doing the next best thing. Along with support staff from the local detachment they will all wear a special Pink Shirt Day pin.

“It’s an issue we really want to be part of, part of anti-bullying. That is what we stand for as the police, this anti-bullying piece,” said Innisfail RCMP Const. Craig Nelson, the detachment’s community schools resource officer.

“We all get pins. We have pins with a pink shirt, and we are authorized to wear those in support of that Pink Shirt Day to show our solidarity with that anti-bullying week, and obviously on Wednesday (Feb. 26) for Pink Shirt Day.”

The Pink Shirt Day pin initiative was launched by the former NDP provincial government in 2017. The idea originated from Sgt. Major Adrian Marr, a former police officer. Her idea was considered a way for first responders across Alberta to don a pink pin in solidarity with Pink Shirt Day, which has become a nationally recognized movement to try and spread anti-bullying.

Innisfail RCMP Staff Sgt. Chris Matechuk, who has led the detachment for the past seven years, noted this year’s pin campaign for Pink Shirt Day is the first time local Mounties have joined in on the initiative.

“Combating bullying is important and Craig does good work in the schools and all RCMP members take bullying seriously, so any awareness we can do to help out or do our part we are happy to do,” said Matechuk, adding members will wear the pins the entire week.

In the meantime, Nelson said local Mounties have always been supportive of Pink Shirt Day, adding senior RCMP members sent emails that the pins were available for members to wear during anti-bullying week. Nelson said all Mounties and support staff received the pin.

“We will have one for everyone and it will be their choice whether they wear it,” said Nelson.

“That is a conversation that has been happening at schools quite a bit lately,” he said. “Bullying is something we like to educate kids about and we don’t tolerate it but it is also something that will be an issue for a long time.”