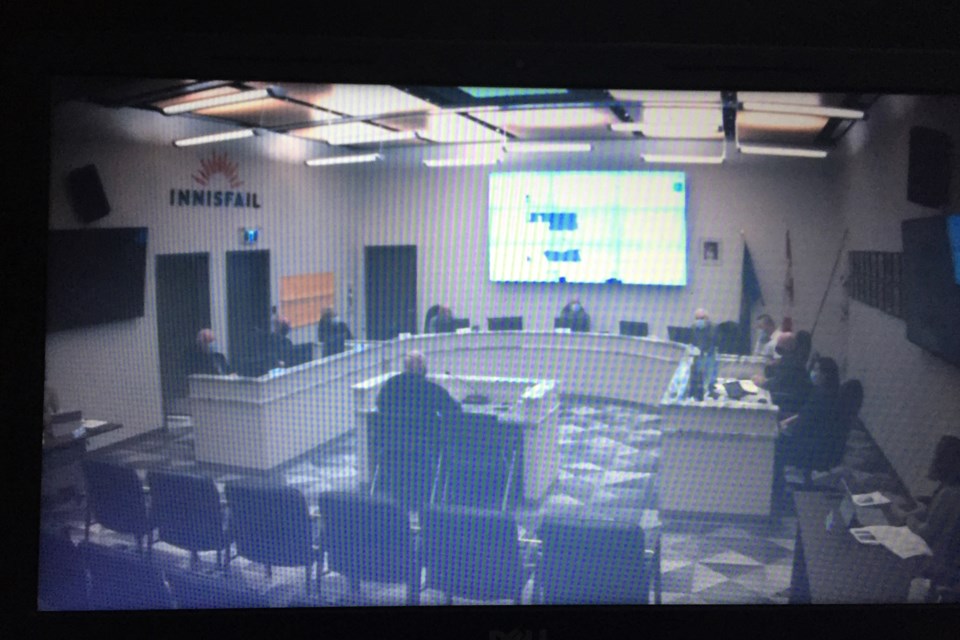 A still photo of a live-streaming feed from a recent Innisfail town council meeting. Mayor Jim Romane called the visual quality 'third rate'. The town is looking to replace its current one-camera system with an improved replacement. File photo/MVP Staff

INNISFAIL – The town is looking for new council chamber cameras to make a better visual impression to the public.

Council was told during an Agenda & Priorities meeting earlier this month there have been complaints about the poor visual quality.

Mayor Jim Romane even conceded the current one-camera system is “third rate” and Coun. Don Harrison said the video looks like council is in a “fish bowl."

However, in the end council ultimately poured cold water over staff’s first proposal last week that had a $17,000 price tag, and directed administration to find a more feasible financial solution that might give viewers a better experience.

Town council was told that when the town was set to unveil its $2.8 million modernized town hall in 2017 the intent was to move to livestreaming for its meetings but budget considerations came into play and it was decided to get a cheaper one-camera system for the council chamber.

Bur when the COVID-19 pandemic forced the town to offer livestreamed meetings, it became apparent the visual quality of the one-camera system was unappealing.

“I am always of the feeling you either do it right or don’t do it. This to me is third class,” said Romane, noting he has received comments about the current camera’s lack of quality. “If we want it to be functional and serve a purpose, we have to upgrade it or do away with it completely.”

Heather Whymark, the town’s director of corporate services, proposed a new three-camera, voice-activated system, that would cost about $17,000 and would be compatible with the current system’s wiring. Her proposed new camera was from the same company that installed the current system.

She said a visual improvement would make it more attractive for citizens to log onto council meetings and become more engaged with local issues.

“That would give a better visualization for the public because right now it looks like you are looking through Saran Wrap or wax paper,” said Whymark following the March 1 meeting. “My intent is to get it visually clear, so you can see who is talking because you can’t always see who is talking.

“I have had people tell me they won’t watch because they can’t see,” she added. “If you are a visual person you like to see what is going on, and what we have up there really doesn’t work well for them.”

However, council was less than enthusiastic with the $17,000 price tag, with some members wondering if alternative solutions could be found.

Coun. Donnie Hill said if the town wanted its citizens to be involved and knowing what council had to say then it made sense to have a fully functioning camera system that council could stand behind and be proud of.

He said an appropriate upgrade should not have to cost as much as $17,000 and that a good alternative might be found with a price tag of “something in the middle.”

However, Whymark said after the meeting it won’t be easy to go outside the current system for a new camera.

“That would be very challenging because it will be a different wiring component,” she said.

Whymark said she hopes to come back to council with new camera options sometime in April.