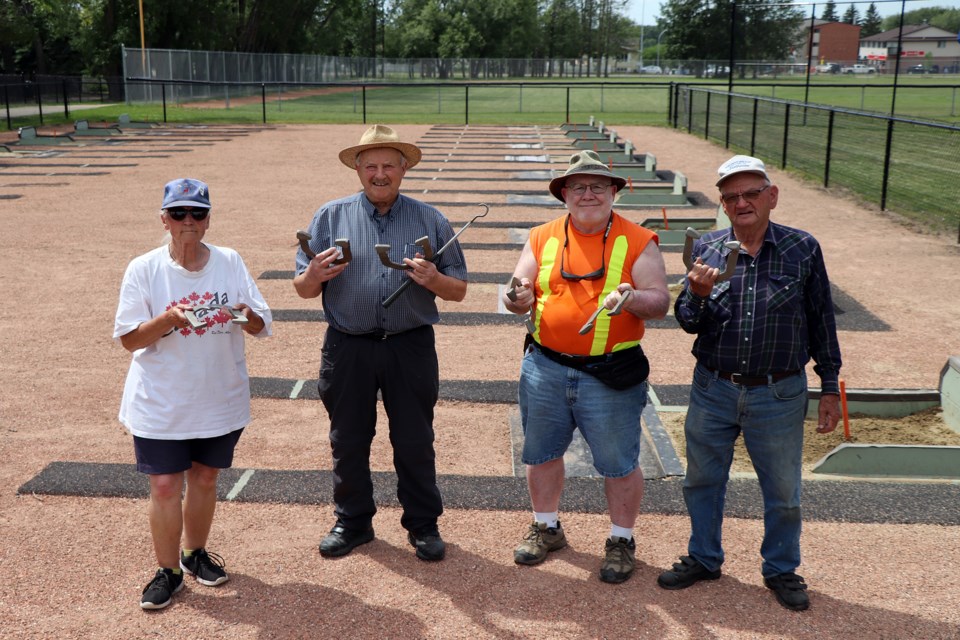 Myrna Kissick, president of the Innisfail Horseshoe Club (left), joining fellow members this month at the club's new relocated facility, which has the recycled rubber walkways adorning each of the 10 horseshoe pits. Johnnie Bachusky/MVP Staff

INNISFAIL – The town’s horseshoers are back pitching at the pits.

About 15 members of the Innisfail Horseshoe Club have been active with house league since the end of May, and will continue to do so until Sept. 15.

Better yet, the Innisfail Open, the club’s big annual event, will be back on the weekend of July 10 and 11 after a one-year hiatus caused by the COVID-19 pandemic. But this year at least, the event, which is sanctioned by the Alberta Horseshoe Pitchers Association (AHPA), will be called the B8 Ventures Classic Horseshoe Tournament, named after the company that installed recycled rubber walkways around the horseshoe pits.

Myrna Kissick, president of the horseshoe club, is bursting with pride over the relocated facility’s recycled rubber walkways, noting they are “very, very unique” to the sport as there is none like it in North America.

“They are the only courts that we know of that have recycled rubber walkways. It is like walking on cushions,” she said, adding it was the club’s idea to have them installed.

Kissick noted this is the second straight season members will be playing at the new horseshoe court that was relocated and built 400 metres south of its longstanding 42nd Street and 51st Avenue location in 2019 at a cost of about $94,000, which the town covered.

The new facility beside the Rotary Park playground is smaller than the old one as it only has 10 courts, compared to the previous 12.

“I think we will be able to hold a tournament with 10 courts,” said Kissick.

The loss of the 2020 Innisfail Open tournament was the first time the annual event was not held since 1987 when the courts of the previous facility were in the process of being installed.

This year’s B8 Ventures Classic Horseshoe Tournament, the first-ever premier event for the new horseshoe court facility, is of course special. There will be a grand opening with ribbon-cutting ceremony and a first horseshoe toss at the start of the two-day tourney.

“We are really looking forward to it. We’ve been kind of delayed on everything you know. I hope it turns out well, but you don’t know about people yet -- whether they will turn up or not,” said Charlie Whatley, the club’s vice president. “It is pretty early yet for them to put in their entry fees.”

Kissick said at this point, it’s difficult to predict how many participants will come to Innisfail for the event, but added the horseshoe community is already enquiring about it.

Some have already reserved some rooms for it and they are from Medicine Hat. I think because they want to see our new court, and they have heard about the walkways, we will have lots,” she said. “I can’t tell you how many, but I think it will be lots.”

As for prizes for top finishers and participants, Kissick said they are not going to ask any of the town’s small businesses to provide prize support, as the club recognizes the financial hardships caused by the pandemic.

Instead, the club will use the tourney’s entrance fees for player prizes, which this year is $10 per participant.

As well, Kissick said for the first time ever, the tournament will have a food truck for players and the public.

“That saves us a lot of work and a lot of messing around,” said Kissick.