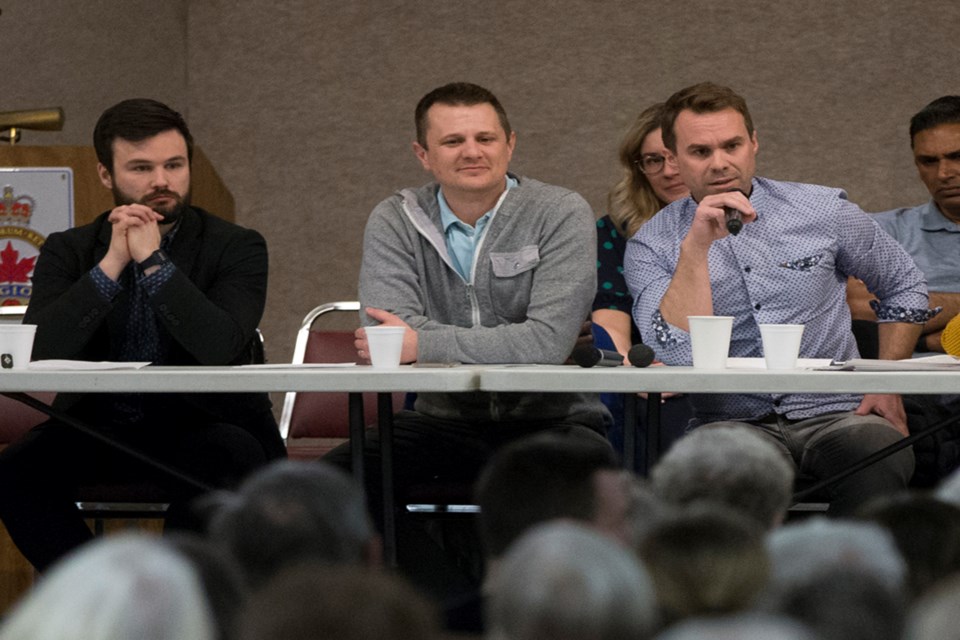 Dr. Jesse Christiansen (centre) at a town hall in Innisfail ealirer this month addressing the concerns of local physcians over planned changes by the provincial government to physician compensation. Noel West/MVP Staff

INNISFAIL – There’s satisfaction but scepticism in town following last week's announcement by the province that it’s reversing course on a controversial change to doctors’ pay.

The move by the Alberta government to cancel the planned changes to the contentious complex modifier pay came the same day it declared a state of public health emergency. The changes were originally scheduled to come into effect April 1.

The modifier is a fee that gives doctors additional money to spend with patients who need to stay for longer than 15 minutes. Under the previously proposed changes, the fees would have made doctors spend 25 minutes with a patient before the complex modifier pay would kick in.

“We’ve heard concerns that this change would result in what has been called 10-minute medicine. While we respectfully disagree with that characterization, we are nevertheless halting this change so that doctors can concentrate on the critical tasks at hand,” said Tyler Shandro, the province’s minister of health in a news release.

However, leading local critics of the original plan said they still have doubts for the future, charging the province may still have plans to tinker with the complex modifiers once the COVID-19 crisis is over.

“I think we are happy during this time of crisis they have put it on hold but what they do in a crisis and what they do after are two different things. I think they are going to have to work very hard to win our trust back,” said Dr. Jesse Christiansen, an Innisfail physician who has spearheaded local opposition to the province’s planned changes. “I don’t know if anything here has made me say that I expect that they are going to do what we think is best for the health-care system after this crisis is over.

“I think it is a combination of a lot of public pressure and a crisis at the same time,” he added. “I am not surprised at all that they changed their minds, even though they stated even (the week previous) that they weren’t going to blink on this. Clearly they have. We are happy they did that but I don’t anticipate this is done.”

Coun. Jean Barclay, who has been a strong voice on town council to ensure the community’s health-care model is not degraded, was pleased with the change but hoped any proposed changes to emergency room billing codes will also be reversed.

“I also hope the minister is listening to doctors and what they need during these trying times,” said Barclay, who invited local doctors this month to speak to town council about planned provincial government changes to their compensation and the detrimental impact they believed it would have on local health service delivery. “We are seeing a rapid rise of COVID-19 in Alberta and we must ensure our health-care system is fully equipped to deal with it. We should be very proud of our community and all Albertans who voiced their concerns with respect to the changes.”

Meanwhile, Innisfail-Sylvan Lake MLA Devin Dreeshen said on March 17 that the provincial government is “100 per cent focused” on the provincial state of emergency” to deal with COVID-19 crisis and the move to cancel complex modifier changes was “prudent."

“We just felt it was prudent to just press pause on it, not move forward at this time and put 100 per cent focus on the health and safety of Albertans,” said Dreeshen, who did not offer a specific answer on whether the planned changes to complex modifiers would return once the public health crisis was over.

“The union may still be concerned with that but our biggest concern is the health and safety of Albertans. And that is why we are making sure that everything the government is doing and our health-care professionals, a lot of them volunteering their time and doing whatever it takes to make sure that Albertans are safe and will be safe in the coming months of this global pandemic. That is our top priority right now.”

With files from the St. Albert Gazette.