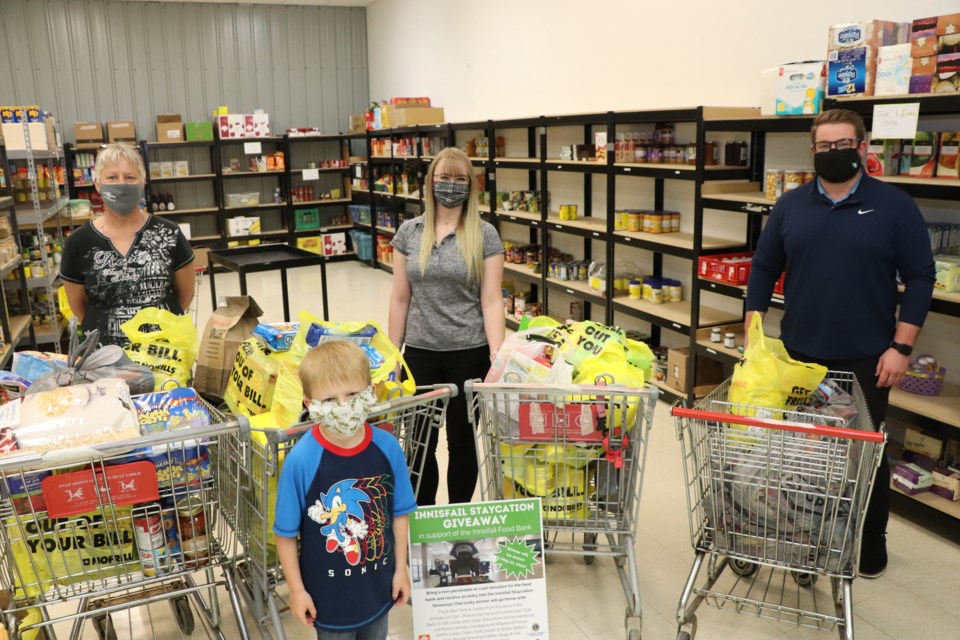 On May 27 the Innisfail and District Food Bank received a donation of 479 lbs. of food, proceeds from the Innisfail Staycation Giveaway contest, a community business partnership designed to ultimately support the local food bank. From left to right is Vall Davies, coordinator of the food bank; her grandson Easton Henry, Emma Neufeld, director of marketing at Fourlane Ford and Willie Mulligan, a sales consultant at Fourlane Ford. Johnnie Bachusky/MVP Staff

INNISFAIL – Several local businesses have teamed up to turn a giveaway into a heartfelt gesture for the town’s vulnerable.

These were the proceeds received from the Innisfail Staycation Giveaway, a community-wide contest that was spearheaded by Fourlane Ford, and carried on in partnership with Napa Auto Parts Innisfail, Innisfail Home Hardware, Field & Forge Brewing Co., Innisfail Golf Club, Dark Woods Brewing, Innisfail Lions Club and G-Force Signs and Graphics.

Emma Neufeld, director of marketing at Fourlane Ford, said the idea behind the Innisfail Staycation Giveaway was to recruit local businesses and ask them to donate prizes for a draw contest that went from April 12 to May 21.

“Residents in the community would come into Fourlane Ford with a food bank donation, whether it was cash or food for four weeks. If they brought anything for the food bank, they would get entry into the giveaway,” said Neufeld.

“We collected well over $1,000 worth of food. On the May long weekend, we had drawn a winner who had obviously donated and took home great prizes.

“We really wanted to keep this in the community to help local people in conjunction with local businesses. It was all about being a part of the community.”

The winner of the draw for the Innisfail Staycation Giveaway was the town’s Bill Engbert, and he was the recipient of several gifts, including a truck bed tent and cooler, 18 holes of golf, $400 in gift cards, camp stove, three campground weekend passes and camp chairs.

A few days later Neufeld, joined by Willie Mulligan, a sales consultant at Fourlane Ford, delivered bags and bags of food to the Innisfail food bank. The gesture was warmly received by Val Davies, the agency’s coordinator.

“That is fantastic. I am so blessed with our community. They are very generous for everybody,” said Davies, adding the demand for her agency’s service is statistically down from previous years but emphasized “newer” clients are coming in.

She noted some of the demand is from citizens, including entire families, who have been devastated by the COVID-19 pandemic.

“A lot of people come in and they feel embarrassed by having to be here, and I always stress very highly to never be embarrassed, that you are not the only one who is in this situation and that we need help every now and again,” said Davies. “I try and make people feel welcome.”