One hundred years and three generations later, Geo T. Ingham and Son Jewellers Ltd. is still going strong.
May 17, 2016 1:00 AM By: Kristine Jean 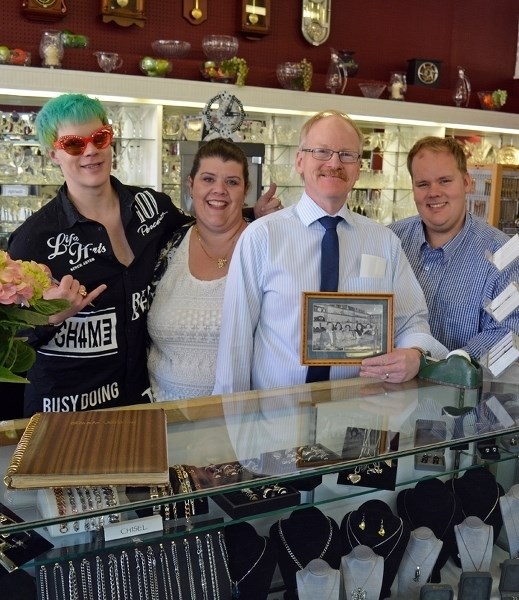 Geo T. Ingham and Son Jewellers Ltd. is celebrating 100 years in the community. The local business held an open house May 13 to mark the historic milestone. Owner Garth Ingham is seen here holding a photo of his grandfather and family members from 1950. From left are Jeffrey Ingham, Joanne Ingham, Garth Ingham and Jonathan Ingham. Missing from the photo is youngest son Brian Ingham.

The local business first opened its doors in downtown Innisfail on May 16, 1916 and today remains one of several key stores in the downtown core.

“It's been something that I never really thought that was anything special because it was just part of who we were,” said Ingham. “But it is something really remarkable to be in the same family and the same community for 100 years.”

Geo T. Ingham and Son Ltd. held an open house on May 13 to celebrate its centennial anniversary. It welcomed patrons, visitors and well-wishers with coffee and cupcakes and storewide sales.

“There's been lots of congratulatory messages. I was really honoured by Earl Dreeshen in parliament in Ottawa – he talked about us in the House of Commons,” he said of the local MP. “We received lots of good wishes today, flowers and cards.”

To help mark the milestone occasion, the store held an anniversary sale and a draw for a diamond and sapphire pendant at the end of the day.

“We try to be a little bit unique from other jewelry stores to try and set ourselves apart,” he said, noting he began working for his father, George Ingham, when he was 14 years of age.

Ingham noted the changes in both Innisfail and in the industry that have taken place over the past century.

“The downtown core here was busier. We've seen the demise of the small business and the family business, which is a sad thing,” he said. “In the industry itself there's been huge changes. I took a design course when everything was done by pencil and paint. Now it's all done on computer and there's the use of lasers in the jewelry industry.”

However, there is one aspect of his business that has stood out for Ingham over the past 100 years.

“We have generational customers. Grandfathers bought a ring here, then the son, and the grandson and that's another interesting thing to know,” said Ingham. “It's nice to see that some of the families here have been second, third and fourth generation customers as well.”

"It is something really remarkable to be in the same family and the same community for 100 years."