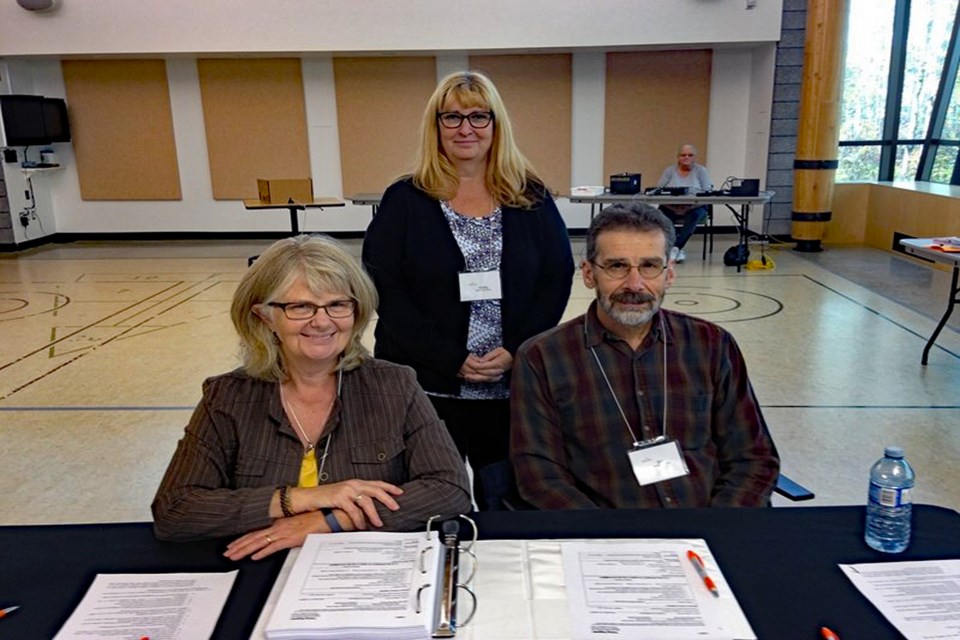 Heather Whymark, the town's long-time director of corporate services (in back), with local workers from the 2017 municipal election. Whymark, who was the town's election returning officer, 'suddenly' left the town on March 31 after 11 years in senior management. File Photo/MVP Staff

INNISFAIL – The town’s number two top staff member has made a ‘sudden’ departure from her job at Innisfail town hall.

In a short three-paragraph news release issued on the morning of Thursday, April 1, and headlined with "Town advises of senior leadership adjustment," the Town of Innisfail said as of March 31 Heather Whymark, the town’s director of corporate services is “no longer employed by the municipality”.

“Heather is recognized and appreciated for her many contributions to both the town and the community over the past several years,” said the news release. “Plans to fill the now-vacant director of corporate services position will be devised and communicated in the coming week.”

Todd Becker, the town’s chief administrative officer (CAO), would not comment on why Whymark, considered the town’s number 2 staff member who previously served as acting CAO for short durations, is no longer employed by the town.

“In respect to Heather and her personal privacy I am unable to make further comment further to that of the press release,” said Becker. “Heather’s departure is considered sudden, and the current role and responsibilities in any vacant position would be under evaluation and a plan put forward to fill any gaps associated with that vacancy.”

Becker said he has “not advanced” the process yet to find a replacement to fill the town’s now vacant director of corporate services.

“That will be part of the evaluation and a process will be established,” said Becker. “Director of corporate services is a vital role within our organization. There definitely will be a process to fill that vacancy.”

With Whymark overseeing the town’s financial affairs, Innisfail is currently moving forward at an enviable zero debt status with more than $14 million in reserves.

“She will certainly be missed in her capacity as director of corporate services,” said Becker.

Mayor Jim Romane said the town “appreciates” what Whymark has done for the town during her 11 years with the town but declined to get into details of the senior manager’s departure.

“Our CAO had to make a decision, and I respect his decision. At this point in time in the realm of privacy I guess we don’t want to get too carried away on the details,” said Romane. “But Todd has reasoning and I got to live with that, and we appreciate what Heather has done for us in the past. I don’t have any comment at this time other than that.”