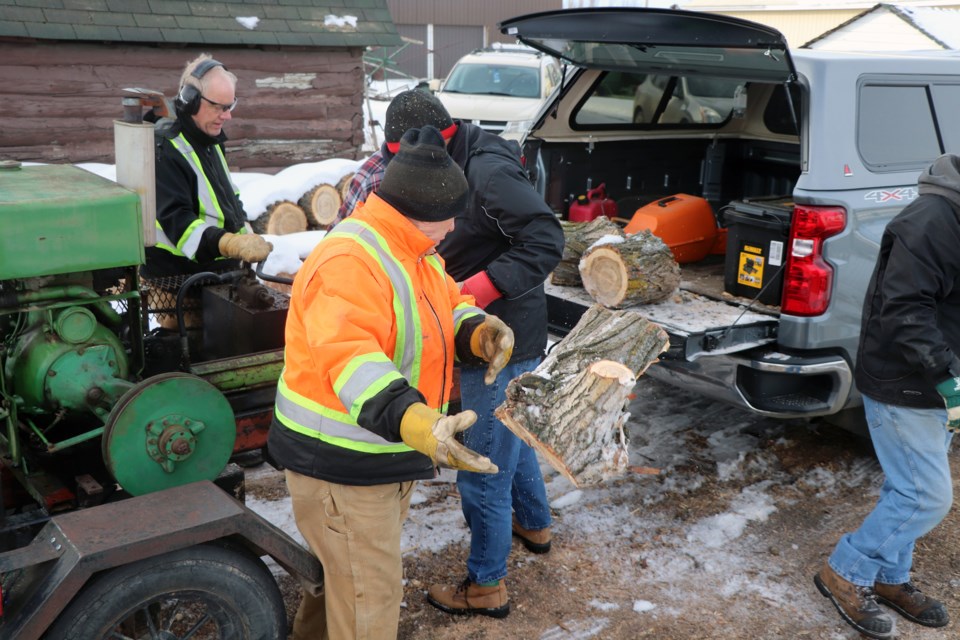 Danny Rieberger, far left, and a crew of volunteers work the wood splitter inside the gates of the Innisfail and District Historical Village to create firewood from recently downed trees. The money raised from the sale of the firewood will go to the local historical society. Johnnie Bachusky/MVP Staff

INNISFAIL – Dozens of fallen trees along 42nd Street and next to the Innisfail and District Historical Village will not be wasted.

In fact, the 51 once towering 50-foot-plus high Golden Willow trees will bring in much needed revenue for the village’s historical society.

Last week, the town announced an additional 136 trees would be removed from the east side of 52nd Avenue between 41st Street and 42nd Street, adjacent to town-owned sports fields. Last fall after the village's Halloween celebrations more than four dozen others were cut down next to the historical village. Replacement trees will be planted starting in May.

While the remains of the trees cut down along 52nd Avenue will be removed by a private contractor, the ones at the historical village, which were cut up into firewood lengths, will benefit many community citizens and the historical society, thanks to longtime civic volunteer Danny Rieberger.

“I was driving by every day on the way to work and thinking, ‘if that wood was split they could sell it and use it as a fundraiser,” said Rieberger, a town councillor who is its non-voting observer on the historical society board. “I approached the board and said, ‘hey, if I get some guys together and split would you use it for a fundraiser?' They said absolutely.

It seemed like a natural way for them to make some money because like other non-profit organizations they are always short of money," added Rieberger." They alre always looking for ways to make money."

Late last month Rieberger found a group of friends who were all in to split up hundreds and hundreds of blocks of wood left over from the fallen trees. These volunteers included Ron King, John Lenters, Al Anton and Larry Strong.

Rieberger then needed a device to chop up the blocks of wood. He pulled out an old wood splitter that was built by his father in 1980, and powered by a two-cylinder flathead John Deere motor that was created in the 1940s.

He said he could not estimate how many truckloads of firewood were created but said his volunteers split up between 500 and 1,000 blocks, which were all about 16-to18 inches long, and anywhere between six inches to three feet in diameter.

Anna Lenters, the president of the board of the historical society, said the cost for a half-ton truck level load will be $50, while for a three-quarter ton level load the price will be $75.

"There has been more than a dozen calls to inquire about purchasing the wood," said Lenters, adding no date yet has been set for pick-up but that information will soon be on the historical society's Facebook page.

"I thought it was a great idea," said Lenters of Rieberger's initiative. "We are selling it at a price well below the normal market value but at the same time it is a really nice fundraiser for us. Everybody wins."