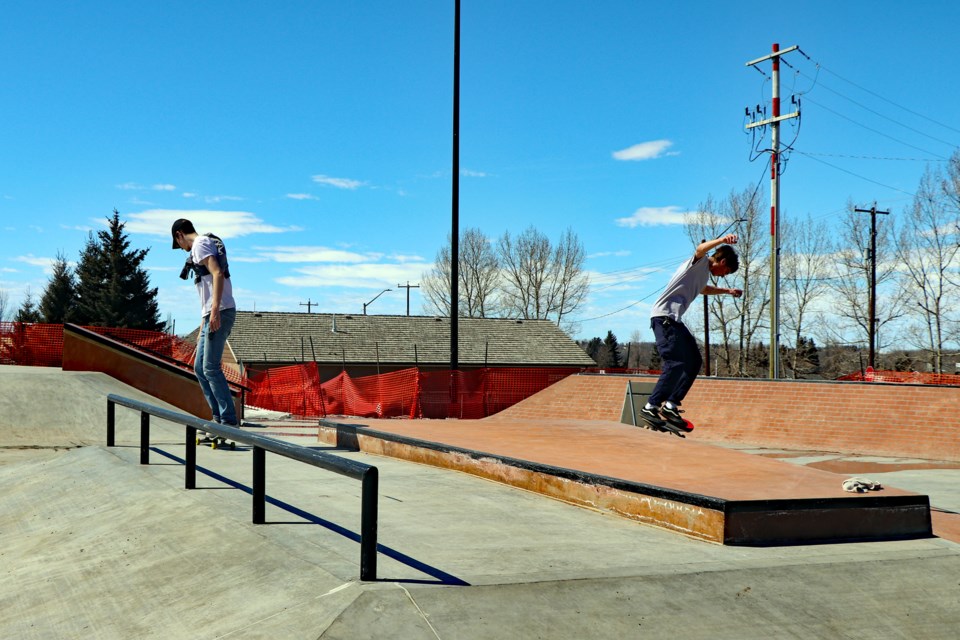 Town council has approved a new sponsorship package for the Innisfail Skatepark, starting at $200 for a commemorative brick and up to $50,000 for corporate naming rights. Johnnie Bachusky/MVP Staff

INNISFAIL - Members of the community are being given the opportunity to have their name featured at the new Innisfail Skatepark.

A new sponsorship package was unanimously approved on May 25 during council’s regular meeting. For a cost ranging from $200 to $50,000, businesses, service clubs and citizens will have the opportunity to literally become part of the million-dollar recreational facility, and help offset some of the facility’s capital investment costs, as well as for maintenance and upkeep. The town is hoping the program will raise a total of $92,500 in sponsorship revenue.

Stuart Fullarton, the municipality's manager of economic development and communications, made the presentation about the sponsorship package on May 25 during council’s regular meeting.

"We are looking to advance an opportunity for businesses and the community to get involved and hopefully offer sponsorship of that facility," said Fullarton.

He added the facility, which was completed last fall, will have new landscaping features placed around it this spring and summer.

“When construction was completed, it was recommended the facility and some of the amenity's capital investment costs be supplemented through sponsorship.”

He told council the town has over the past 18 months heard from three or four local businesses that expressed interest in sponsoring the skatepark.

Coun. Jean Barclay asked how the initiative is going to be marketed, and how the town will reach out to them, as well as service groups.

“The intent is to get this to as many hands as possible,” said Fullarton, adding administration plans to create a list of interested businesses and service clubs, as well as other ones the town has “handpicked” as potential supporters.

“It is what I call an aggressive approach and targeted as well, but also advertised through traditional means through the town’s website and Town Voice to the general public.

“It might be a case of pounding the pavement to where we are able, even in current circumstances, and really promoting the opportunities as much as we can,” he said.

The package was strongly supported by Coun. Glen Carritt, who commended staff for taking a business approach with the program.

“Everybody has that, in my mind, in business. I like it.”

Mayor Jim Romane noted there has been past success with advertising signs at the arena and the Innisfail Curling Club.

“The opportunity is there for the community to show their colours,” said Romane.

During Fullarton’s presentation, council was told sponsorship price point calculations were based on the capital investment cost as well as installation, and recognition plaques and signs.

Council was told six sponsorship levels have been earmarked within two categories — the first being for the skatepark facility corporate naming rights, while the five others are coming from the skatepark amenities inventory, including picnic tables, park benches, maintenance lock box, recycling receptacles and commemorative bricks.

There is only one corporate naming rights sponsorship available, and that is for a 10-year term at $50,000; the cost to be spread over five annual $10,000 installments. This revenue will be set aside in a reserve account to be used for maintenance and upkeep.

As for the amenities, there are two picnic tables available at a cost of $5,000 each, while four park benches go for $2,000 each.

There is only one maintenance lock box sponsorship and it goes for $1,500.

There are three recycling receptacle sponsorships available that go for $1,000 each.

And finally, there are 100 commemorative brick sponsorships up for grabs. Each one goes for $200. The sponsorship term agreement is for the lifespan of each amenity.