A record number of local families this holiday season utilized the services of the Innisfail and District Christmas Bureau.
Jan 3, 2011 12:00 AM By: Mountain View Today Staff 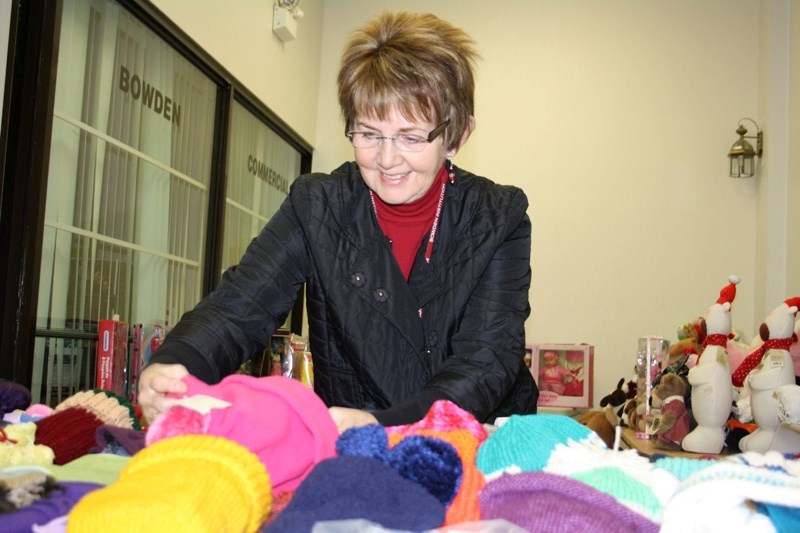 Norma Hoppins sorts through toques and mitts at the Christmas Bureau Dec.9. The Bureau saw a record number of people utilize its services this season.

A record number of local families this holiday season utilized the services of the Innisfail and District Christmas Bureau.

Marian Moritz, volunteer and board member for the bureau, said final figures showed a record number of 167 families registered with the agency to receive Christmas hampers. The total number of families represented 349 individuals, including children.

Moritz said the record number of families showed that the need in the community is not only growing but also demonstrated continued changing demographics in terms of who is relying on the service.

“We are seeing more people who are working on minimum wage than families who require support,” she said. “There are a lot of individuals who are not making it.”

Moritz said about half the people who registered were single and couples without children, including father and son, and roommates.

“If you are trying to live on AISH or a fixed income it is very hard and if you are living on minimum wage it is very difficult too,” she said.

This year’s statistical information will be reviewed when the board meets in February, she said.

“We will have a look at it (demographics) and see how we can manage the situation. It seems to be continuing,” said Moritz.

She said the agency saw the trend beginning a few years ago and began preparing small gift packages for individuals.

Moritz pointed to recent layoffs in town as one possible reason for the greater need shown this holiday season.

“We thought it would go up because of the layoffs. We were surprised at the number of individuals we saw. We had quite a few last year but there were more this year,” she said.

Meanwhile, the agency is gratified by the hard work of its volunteers and the community response to help the needy at Christmas.

“We had a wonderful response in terms of donations. The team worked well and got out hampers in good order,” she said. “We had wonderful gifts donated. We had really nice gifts for children. The people responded very well.”