Byelection candidates zero in on ghosts of the past 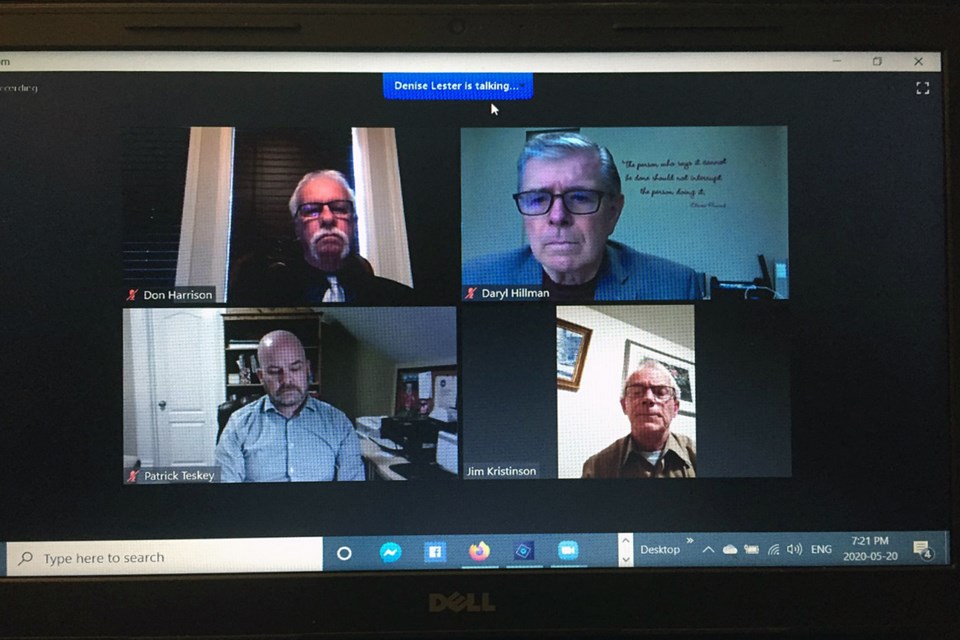 The four candidates for the vacant Innisfail town council seat faced off against each during the online forum on May 20. At top, left to right, is Don Harrison and Daryl Hillman, while at bottom, left to right, is Patrick Teskey and Jim Kristinson. The byelection vote is set for Monday, June 8. Johnnie Bachusky/MVP Staff

INNISFAIL – It was a byelection forum like no other.

There was no huge crowd. No applause, boos or heckles.

And when the May 20 virtual byelection forum, sponsored by the Innisfail & District Chamber of Commerce, was over, each candidate could claim viewers had a fair opportunity to find out where everyone stood on future growth, post-pandemic recovery, community health care, affordable housing, crime prevention, employment opportunities, train whistles, and one haunting council ghost of the recent past – pet chickens.

“I know the community came out overwhelmingly in support of it. Council voted the other way and voted it down,” said Teskey on a question whether residents should be allowed to keep chickens, ducks and geese on residential lots.

“My thought is if you are going to spend the money and you’re spending the time and effort to get the community’s opinion like that, you better be willing to hear what they are saying.”

In the fall of 2018, town council, with the exception of councillors Jean Barclay and Doug Bos, voted against allowing urban chickens in the community by a margin of 5 to 2.  Voting against it were councillors Glen Carritt, Danny Rieberger, Gavin Bates, Donnie Hill and mayor Jim Romane.

The controversial council vote followed an extensive public stakeholder feedback process, which included a comprehensive online survey. The survey results, from a total vote of 627, showed 411 (66 per cent) in favour of allowing pet chickens in the community against 204 (32 per cent) who said no.

“I was somewhat disappointed with the council when they decided to overturn that survey because they were talking about transparency, we are going to the listen to the public, and public engagement,” said Harrison during the forum. “And all of a sudden they did a 180 and here we are with no chickens.”

The forum also tested another simmering issue of the past – noisy train whistles, which Hillman has been combatting for several years.

He said train whistles is a quality of health issue, with up to 40 per cent of local citizens being awakened by up to six trains rolling through town on most nights.

“Another thing is that those train horns are not whistles anymore. They are horns,” said Hillman. “We measured it at 145 decibels at the crossing here on 49th Avenue. The tolerable decibel amount is 85 without harming your hearing. I feel for those people who live by the tracks.”

While the current council has directed the train whistle issue over to professional outside assessment and review, all candidates agreed the ongoing noise was not worth spending huge money on when there are bigger priorities, notably public safety that includes the unregulated crossing at the White Rock area where hundreds of school kids illegally cross the tracks back and forth from home every week.

“That is a higher priority than a train whistle. I grew up in Innisfail and I hate to say it guys but you get used to that whistle, and it certainly doesn’t keep me awake at night,” said Harrison.

Meanwhile, the four candidates were also asked about what role should council play as Innisfail begins to reopen from the COVID-19 pandemic.

Kristinson said council needs to take a leadership role to move the town ahead as quickly and as safely as possible.

“The longer we stay dormant the harder it is going to be to recover,” said Kristinson. “I think those who are quicker out of the mark are going to benefit more from it, and I think as town council we are the ones that have to make those decisions based on what’s best for our town.”

Teskey said council should listen to local businesses and citizens for their views on how to move forward, with the town arranging meetings with federal and provincial representatives and the local business community.

“It is going to be a challenging time but I think town council can take on a leadership role, arrange those meetings and see where it can take us,” said Teskey.

At the end of the question segment of the forum, moderator Denise Lester asked candidates what their number one priority would be if elected.

Harrison said his top priority over the next 17 months leading up to the next municipal general election would be to ensure the Innisfail Aquatic Centre revitalization project continues to move forward.

“If you are not growing you are dying,” he said, adding industrial expansion and job creation was the town’s best option for sustainable growth.

Both Kristinson and Teskey said crime and drugs were their number 1 issues.

“It is affecting our young people badly and destroying an entire generation. That generation is going to be looking after me when I am old. I want them to be able to succeed,” said Kristinson.

Teskey said he would like to work with the Town of Penhold and Red Deer County to see if there is an opportunity for a cost-sharing agreement or some way to hire more police offers to deal with rising crime, and the increased use of illegal drugs, notably methamphetamine.

“We need to get those drugs off the street,” said Teskey,

The byelection vote is set for Monday, June 8, from 10 a.m. to 8 p.m., in the Community Room at the Innisfail Library/Learning Centre.