Battle of the hockey Birds will finally begin 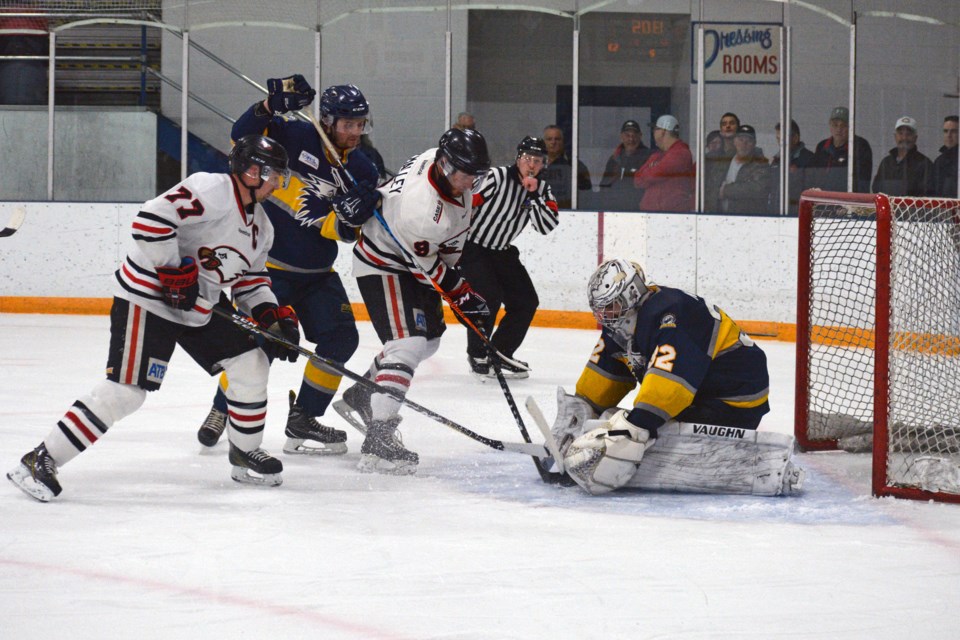 INNISFAIL – The Innisfail Eagles are ready to hit the ice.

The two teams remaining in the Chinook Hockey League, the Innisfail Eagles and the Stony Plain Eagles, will go head to head in an eight-game regular season schedule, beginning Nov. 23.

“Fortunately for us we have a lot of returning guys. We’ve got a pretty good core group of guys and we’ve been able to add some new faces to the lineup,” he added.

Dodd said about 17 returning players are expected to lace up for the Birds, including returning captain Joe Vandermeer, goaltender Allan York, Chris Bailer, Chad Robinson and Riley Simpson, all who had big roles in last year’s Allan Cup championship series.

“They’re key contributing guys to our club,” he said. “We have a core nucleus and you try to build around them. We think we’ve done a good job at filling some holes (for) guys who have left.”

With the season approaching, the team will be holding regular weekly practices, said Dodd.

“We’ve skated three times already, just getting guys out and moving pucks around but nothing with a full squad,” he said. “Starting this Wednesday (Nov. 6) we’re going to have some full-scale practices to get ready to go for the first game on November 23.”

Dodd noted some areas they want to focus on during this short season.

“We want to be one of the best in shape teams out there,” said Dodd. “It’s always a battle when you get late into a game and you want to make sure your guys are in good shape and they can carry the pace.

“We want to make sure that we’re moving pucks, utilizing our defencemen and getting into the middle of the ice to let the shots go and get to the net,” he added.

All eight games during the regular season will be held on a Saturday, noted Dodd.

The regular season will be followed with a seven-game playoff series for the provincial title, beginning the second week of February.

Innisfail firefighters save desperate Husky dog in Red Deer River
Feb 15, 2020 6:35 AM
Comments
We welcome your feedback and encourage you to share your thoughts on this story. We ask that you be respectful of others and their points of view, refrain from personal attacks and stay on topic. To learn about our commenting policies and how we moderate, please read our Community Guidelines.