Residential-school survivors call on Ottawa and provinces for monuments

Ottawa and provincial and territorial governments must build monuments in capital cities across Canada to honour residential-school survivors and their families, says the director of the National Centre for Truth and Reconciliation.
Nov 17, 2020 8:15 AM By: Canadian Press 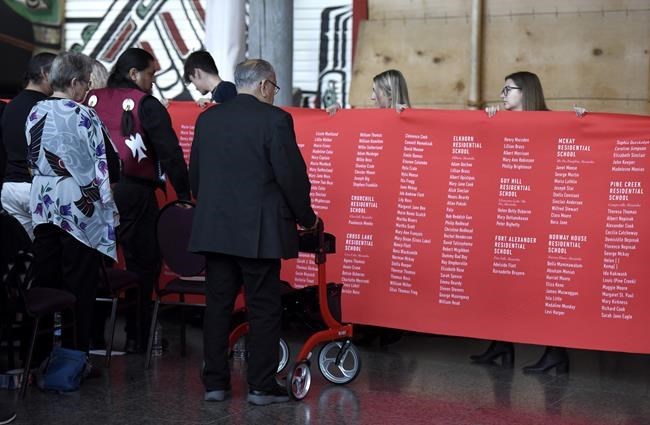 A ceremonial cloth with the names of 2,800 children who died in residential schools and were identified in the National Student Memorial Register, is carried to the stage during the Honouring National Day for Truth and Reconciliation ceremony in Gatineau, Quebec on Monday, Sept. 30, 2019. The National Centre for Truth and Reconciliation's director says Ottawa and provincial and territorial governments must establish monuments in capital cities across Canada to honour residential schools' survivors and their families. THE CANADIAN PRESS/Justin Tang

Ottawa and provincial and territorial governments must build monuments in capital cities across Canada to honour residential-school survivors and their families, says the director of the National Centre for Truth and Reconciliation.

Speaking to the House of Commons heritage committee Monday, Stephanie Scott said symbols are powerful medicine to bring comfort to survivors and to keep their experiences in front of the nation.

"Canadians need to know the truth and understand what happened in order to foster true reconciliation and healing," Scott said. "Commemoration and education are critical to understand the complicated and difficult history that we share as Indigenous and non-Indigenous Canadians."

Scott said creating a national day to mark truth and reconciliation is also important, to acknowledge survivors and the human-rights violations they endured.

"We have seen time and time again what a difference education can make to the journey we are all now on together to reconcile our past and create a bright future for all the generations to follow," Scott said.

Indigenous Services Minister Marc Miller said Monday the federal government has done a lot, but not enough, to honour survivors.

He also said there are difficult memories associated with the sites and buildings where the schools were located, so the federal government should work with Indigenous communities to find the best way to mark the "painful heritage" of residential schools.

"There is a great movement to preserve some of those things, and there's some communities that would say, 'We want to get rid of them, we don't want to see them anymore,'" Miller said.

Sept. 30 is currently Orange Shirt Day, after the experience of Phyllis Webstad, whose gift of clothing from her grandmother was taken away on her first day at a residential school.

Webstad, who spoke at the committee meeting, is a third-generation residential-school survivor. She attended the St. Joseph Indian residential school, also known as The Mission, near Williams Lake, B.C. Her grandmother attended the school for 10 years; so did her 10 children, including Webstad's mother.

"When I turned six in July of 1973, Granny took me to town to buy something to wear for my first day of school," Webstad said. "I chose a shiny new orange shirt. It was bright and exciting, just like I felt to be going to school for the first time. When I got to school my shirt was taken away and I never wore it again."

She said her own son was at the last operating residential school in Saskatchewan when it closed in 1996.

Webstad said Orange Shirt Day was born out of an event in Williams Lake in May 2013 to keep the conversation alive after the Truth and Reconciliation Commission wrapped up.

"The theme was remembering, recovering and reconciling," she said. "I was part of the planning for a (truth and reconciliation) event, where I told my story of my orange shirt for the first time."

The heritage committee is examining a government bill to turn the day into a national occasion for a broader observance of the history of the schools.

Stephen Kakfwi, a residential-school survivor and former premier of the Northwest Territories, said this national day should not be seen as a holiday but as a day of honouring and remembering, like Remembrance Day.

"Reconciliation is not an Aboriginal problem. It is a Canadian one," he said.

"I would like to convey that we're very pleased with the suggested date of Sept. 30 as the National Day for truth and reconciliation."

He said September has always been a difficult month for him as a survivor.

"September comes (and) you suffer periods of feeling empty and lonely," Kakfwi said. "It is because it is tied to the season when you are taken away by force from your family in your community, and brought to the residential schools."

Former NDP MP Romeo Saganash, who is Cree, called on Ottawa and provincial governments to put in place a plan to fully adopt and implement the United Nations Declaration on the Rights of Indigenous Peoples.

"Let's not forget that there's at least 16 references to the United Nations declaration in the calls to action by the Truth and Reconciliation Commission," he said.

"Not only legislation this country needs to be consistent with the UN declaration, but our policies, and our operational practices as well," he said.

This report by The Canadian Press was first published Nov. 16, 2020.

Note to readers: This is a corrected story. A previous version gave an incorrect last name for Phyllis Webstad.