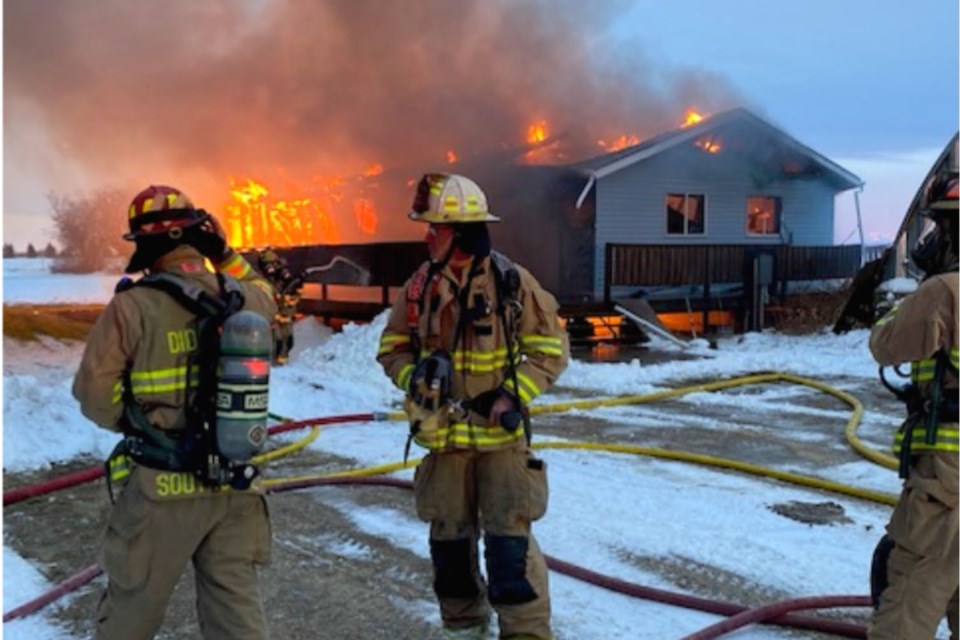 Firefighters from Olds, Didsbury and Carstairs responded to a fire that destroyed a vacant home in Mountain View County earlier this year. Department boundaries have been adjusted based on drive time and response time. Photo courtesy of Town of Olds

MOUNTAIN VIEW COUNTY - Recently implemented changes to fire boundaries within Mountain View County, changes that involve all five departments operating in the area, shouldn’t have any impact on service and should help improve response times to incidents such as fires and motor vehicle collisions, say officials.

“Possibly if the right call happens in that area it could have a very positive impact for the citizen who calls us,” said Miller. “From a response time perspective it could make some positive impacts on certain incidents that we attend.

“I think the territory that ended up going up north is fairly narrow and focused on the Highway 22 so from a call volume perspective I think it is going to be fairly minimal.

“Everything was sort of calculated from a response perspective, so I think it makes sense to balance out the area a bit more than it was.”

He said he does not expect the boundary change to have any impact on the department’s manpower needs.

“Overall I think we are looking at a fairly small change in call volume,” he said.

The boundary changes were put in place following a year-long review involving the county and the fire area departments, including examinations of operational considerations and topographic constraints.

The boundaries have been adjusted to ensure that the department closest to an incident is the first to receive initial dispatch.

Regardless of which department is initially dispatched to an incident, each fire chief retains the ability to call on other departments for assistance, including accessing additional resources.

Curtis Mousseau is Didsbury’s fire chief. He says the boundary changes mean his department’s response area will be slightly smaller with the removal of a portion on the far western boundary.

“It reduces our area but I don’t imagine it will change our call volumes very much,” said Mousseau. “Overall in the grand scheme it shouldn’t change things much for us.

“They made the changes based on drive time and response time, so it’s a matter of trying to best serve the ratepayers of Mountain View County. I don’t imagine it will change things too much.”

The boundary changes, which officially came into effect on Dec. 7, are not expected to have any impact on the number of members in the Didsbury department, said Mousseau.

Under the changed boundaries, the Didsbury department’s area no longer includes a portion of Highway 22.

“In the last few years it hasn’t been that busy out there,” he said. “In instances of a motor vehicle collision on Highway 22 it makes more sense to send Cremona or Sundre because they are that much closer than us. In the interest of patient care, send the closer department. They can initiate patient care and it’s a better outcome.”

The region’s departments will continue to work well together in terms of providing mutual aid if needed, he said.

“We get along well and if we ever need help we are never shy about calling on the nearest department,” he said.

The Sundre fire department’s boundary expands slightly to the east, from Rge. Rd. 40 to Rge. Rd. 35, with the Olds boundary decreasing by the same amount.

Olds Fire Department Chief Justin Andrew says he does not expect the boundary change to impact his department, and that updating the boundaries based on up-to-date call levels and other information is a positive move.

The Carstairs department’s boundary decreases slightly on the far western edge, with the Cremona department taking over that area.

The county says residents should not notice any impact as a result of the changes.

“For those properties that have been reassigned, no impact should be experienced with the exception that property owners should contact their new department for any fire inquires or planned activities,” the county said in a news release.

The new boundary map is available for viewing at mountainviewcounty.com.