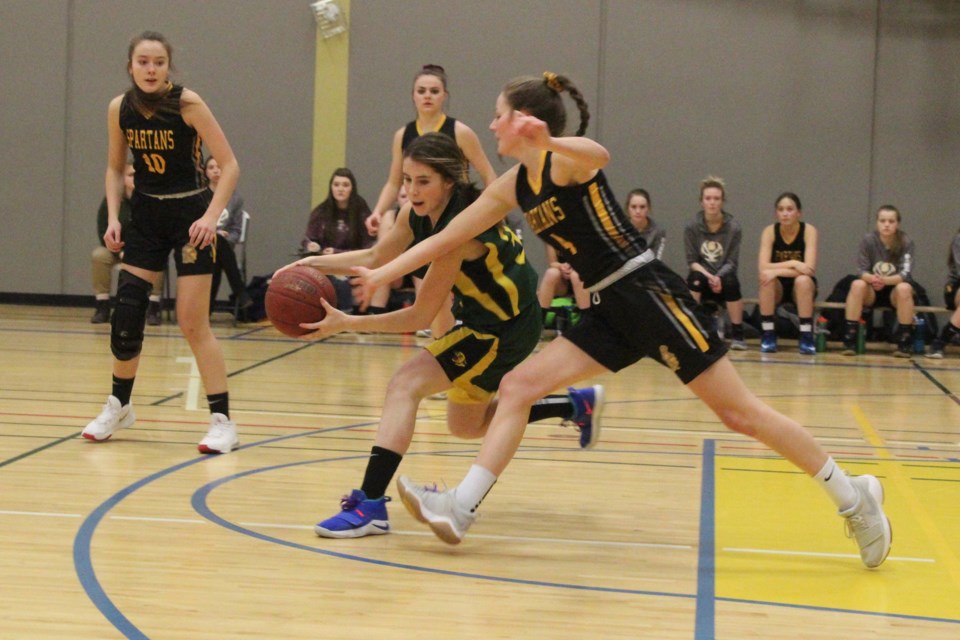 Players from Cremona School (in green) and École Olds High School fight for the ball in the first game of the Natasha Cameron Nielson Memorial Basketball Tournament held at Hugh Sutherland School in Carstairs. École Olds High won the game 51-40 over Cremona and went on to win the tournament. Craig Lindsay/MVP Staff

CARSTAIRS - Six senior girls' teams gathered at Hugh Sutherland School (HSS) in Carstairs recently to play some basketball as well as honour the memory of Natasha Cameron Nielson, a former HSS student, player and coach. Nielson passed away in 2002 at the age of 21 in a car accident.

Several members of the family, including brothers, sisters and cousins, were on hand for the Feb7 7 - 8 event. Back again this year were parents Scott and Pam Cameron, who returned after being out of the country for two years on a mission.

Scott said the tournament is a great way to honour their daughter, who was a fan favourite at HSS and later when she played at Red Deer College.

Scott said they are grateful for the support the tournament and the family get from the community and other families that help out.

"This is a way we thought of remembering Tasha in that way," he said. "She was very giving; a really hard worker. She loved the game; loved people. So this is a really good way to remember her. We give out heart and hustle awards after each game, not MVP (most valuable player). We recognize the people who work hard and are good team players."