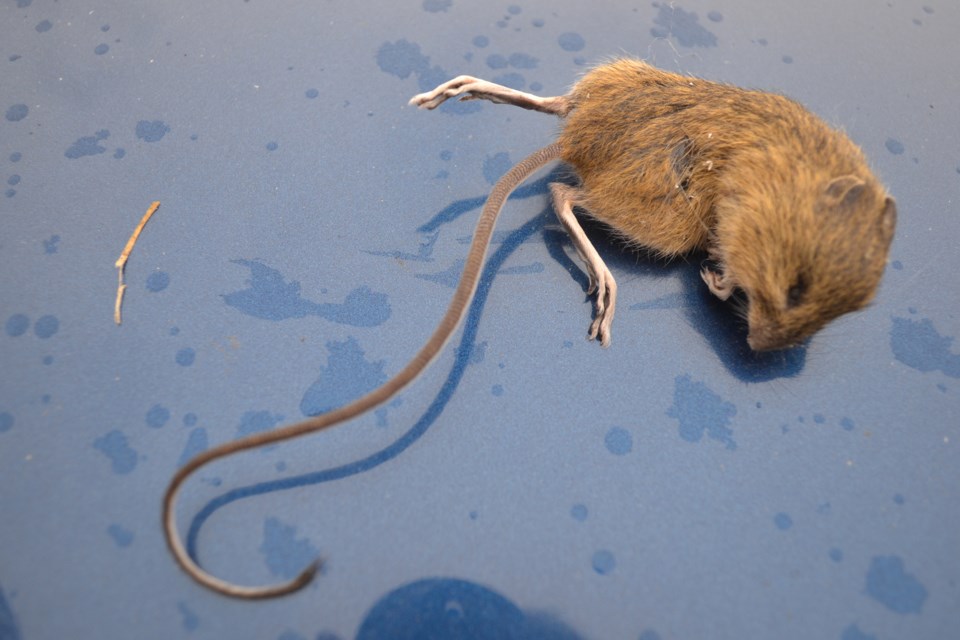 The mouse dragged in by Lady the cat lies on the hood of Gary Thorpe's truck. Doug Collie/MVP Staff

RED DEER COUNTY — Red Lodge U Pick owner Gary Thorpe has seen a thing or two before, but never the creature his cat dragged in — a yellowish-brown mouse with big hind legs and a very long tail.

He went on the internet and came to the conclusion it was a woodland jumping mouse.

However, those creatures are said to live basically in central and Eastern Canada, as well as southeastern Manitoba – nowhere near as far west as the area of the county west of Bowden.

After seeing a photo of the mouse that was sent to him, a University of Calgary biology professor confirms it is most likely a jumping mouse, but not the woodland species.

It all began about a month ago.

Lady, a cat that hangs out at Thorpe’s property, brought home a mouse.

“She was playing with it, tossing it, fooling around with it. It was dead,” Thorpe recalls.

“When she went for her nap, the mouse was still laying there. So I looked at it. The first thing I saw that was really remarkable was this really long tail.

“It was about the mouse size. It has a long tail, and the colour wasn’t the same as we’re used to. This one was brown with some yellow tint to it and it had a white tummy.

“So I came in and typed in mouse with long tail, brownish-yellow with a white stomach. What kind of a mouse is this? I find out that it’s called a woodland jumping mouse. I had never heard of it, I’d never seen one."

“It’s built like a kangaroo. It’s got strong back legs, it’s got little forepaws that they hold their food with and eat, and it can jump between nine and 10 feet,” he said.

And I thought, ‘really, where are these from?’

“I was amazed. I was truly amazed and I just wondered if others had maybe seen this sort of thing,” he said.

Thorpe kept it; wrapped it up and put it in some sandwich bags in a deep freeze in the garage.

He didn’t tell his girlfriend about that stash until a few days ago.

“I couldn’t imagine how it got here,” Thorpe said. “I mean, I have a dairy operation, so I have lots of people coming and going in the summer.

“I thought maybe I had somebody here from Ontario, because I get people from all over the place. Lots of foreigners. Lots of people who are coming out here to visit and I thought maybe this little guy hitched a ride with one of them.”

He wondered if perhaps someone staying in the park had visited his place and the mouse hitched a ride that way.

Thorpe had also read that in central and Eastern Canada some people keep them as pets, so he wondered if one had gotten away from its owner or had been deliberately left behind, as sometimes happens with unwanted litters of cats or dogs.

“People after they don’t want them anymore, they’ll bring them out into the country and drop them off near a farmhouse and hope for the best. Maybe that’s what happened here too. I don’t know,” he said.

After looking at the photo, University of Calgary biology professor Peter Neuhaus gave his verdict in an email.

“I probably would have difficulties to determine which, even when having it in my hands.”