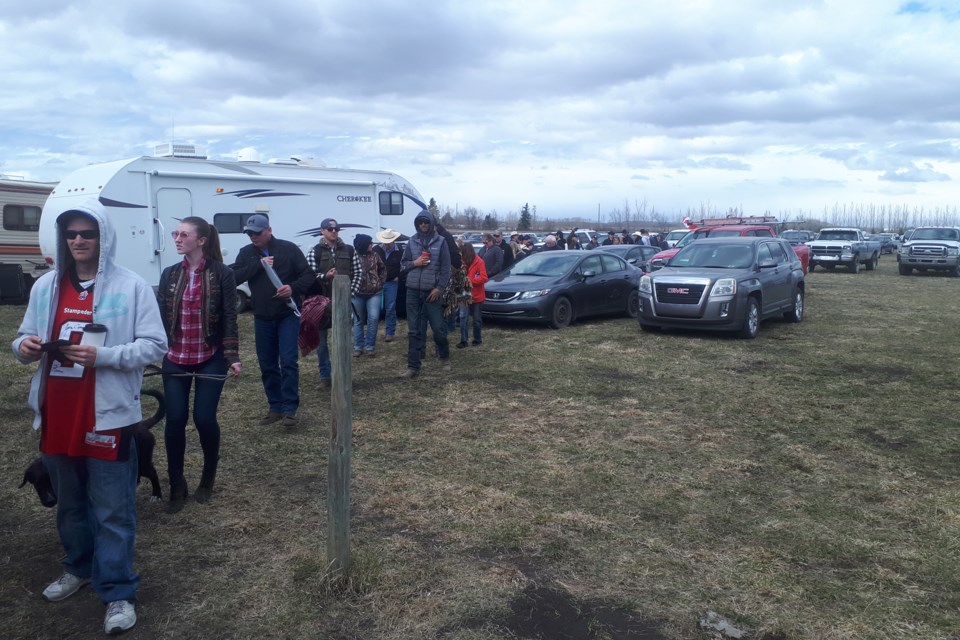 A steady stream of spectators filed through the gates to attend the No More Lockdowns Rodeo Rally. The two-day rodeo and protest against COVID-19 pandemic restrictions ran May 1 and 2 just south of Bowden. Doug Collie/MVP Staff

BOWDEN — Bowden and District Agricultural Society (BDAS) president Keith Bailey has called on Premier Jason Kenney to retract a statement he made about the No More Lockdowns Rodeo Rally, held just south of the town May 1-2.

In addition, the Town of Bowden and the BDAS sent out a joint statement on the matter on May 4.

“So if the premier’s going to go on TV and run Bowden through the mud, he might want to be accountable himself and retract his statement.”

Following is what the premier said during a May 3 news conference regarding the rodeo rally that drew thousands of people in defiance of current restrictions:

“I was very disturbed – actually I was angered -- to see large numbers of people gathering this weekend at an event in Bowden in flagrant violation of the restrictions in place – and of any common-sense public health measures.

“I know this event was not organized by the Canadian Professional Rodeo Association, who has been working closely with the government to bring a safe return to this amazing sport this summer.

“And I was heartened to see the association, representing rodeo, publicly disavow the event in their statement earlier today. I thank them for doing so.”

Following is the joint statement by the Town of Bowden and the BDAS:

“The event was held on private property outside of the municipal boundaries of the Town of Bowden.

“The Town of Bowden and the Bowden and District Agricultural Society did not endorse or have any involvement in this event.

“Alberta Health Services (AHS) had knowledge of the event and we were informed that they had jurisdiction.”

The premier’s office was asked for comment on Bailey’s statement.

“Aside from mentioning briefly where the event took place, the premier was careful not to implicate any organization in his comments,” an email from his office said.

“Nothing in his statement placed blame on either the Town of Bowden or the Bowden agricultural society. To the contrary, the premier made clear that established organizations were not involved in the event.”

Bailey said the BDAS was approached to book its grounds by No Lockdown Rodeo Rally organizers in February or March.

“At the time it wasn’t the Lockdown Rodeo, it was just a rodeo, sanctioned under FCA (Foothills Cowboys Association) and Wildrose (Rodeo Association),” Bailey said.

“We went ahead with the booking. We thought COVID restrictions would be lifted – somewhat – to be able to have a rodeo by now.”

Bailey said the BDAS decided to rescind permission for the event to be held on their grounds about a week-and-a-half ago in order to comply with pandemic restrictions.

The Foothills Cowboys Association and Wildrose Rodeo Association issued a joint statement on April 14 distancing themselves from the organizers of the No More Lockdown Rodeo Rally. The associations had previously agreed to sanction the event.

“There has been a lot of attention around this event and if AHS finds such event is not in accordance with (provincial) government mandates and restrictions, the backlash could be very detrimental to our organizations,” reads a portion of the statement approved by both group’s boards of directors issued in the weeks leading up to the event.

Ty Northcott of Northcott Rodeo Inc. which hosted the rodeo rally, told the crowd at the conclusion of the event on May 2 that the bleachers for the event were courtesy of the Bowden ag society.

Bailey was asked to confirm whether the ag society did so.

When asked for comment on the Town of Bowden and ag society statement, AHS sent a statement issued to news media earlier.

“Prior to the event, AHS inspectors spoke with — and provided written information to — the organizers, notifying them that proceeding with their plans would be in breach of the public health orders," it said.

“In addition, AHS sent a letter to the organizers indicating that the event would be illegal if it were to proceed.”