Beginning the morning of April 29 and running for two and a half days, workers at the site of Canada's largest COVID-19 outbreak will be able to access the Moderna vaccine.

Brent Calver
Apr 29, 2021 4:15 PM
Previous Next
Cargill worker Jamie Welsh-Rollo gets her Moderna shot at the plant near High River on April 29. A team of doctors and other medical professionals began vaccinations that morning, with over 1600 of the plant's estimated 2000 workers pre-registered. (Photo courtesy Joe Attwood/UFCW)
Expand

Workers at the Cargill plant near High River are now receiving the COVID-19 vaccine.

Beginning the morning of April 29 and running for two and a half days, workers at the site of Canada's largest COVID-19 outbreak will be able to access the Moderna vaccine.

“The workers are all excited and staff’s all excited. The first hour or so we were ahead of our target,” High River Dr. Adam Vyse said in a press conference outside the plant.

With over 1600 of the over 2000 workers at the plant pre-registered, Vyse said his team is expecting to pick up more along the way.

“I think for those that are hesitant, when they see their colleagues and coworkers having got the vaccine, we’ll expect a batch of them coming that way," he said.

“We’re looking at getting those through in two and a half days.”

The workers will be receiving the Moderna vaccine, of which the doctors have 1800 doses.

Getting vaccines to the workers of the plant has been a priority for Vyse.

“We saw that in the outbreaks, and we’ve seen that across Canada with marginalized, racialized communities being affected more disproportionately than others," he said.

“Bringing the vaccine to that community is really important.”

This will benefit not just the workers, but the community at large, he went on to say.

“We know that a targeted vaccination approach is something that’s supported across Canada," he said.

“Accessing these workers who come from those communities, here at the plant where they work, where it’s easy and convenient, where they can trust, is a really effective way of bringing vaccines to them.

“They’ll take that back to their communities … and that will delay the spread for sure.” 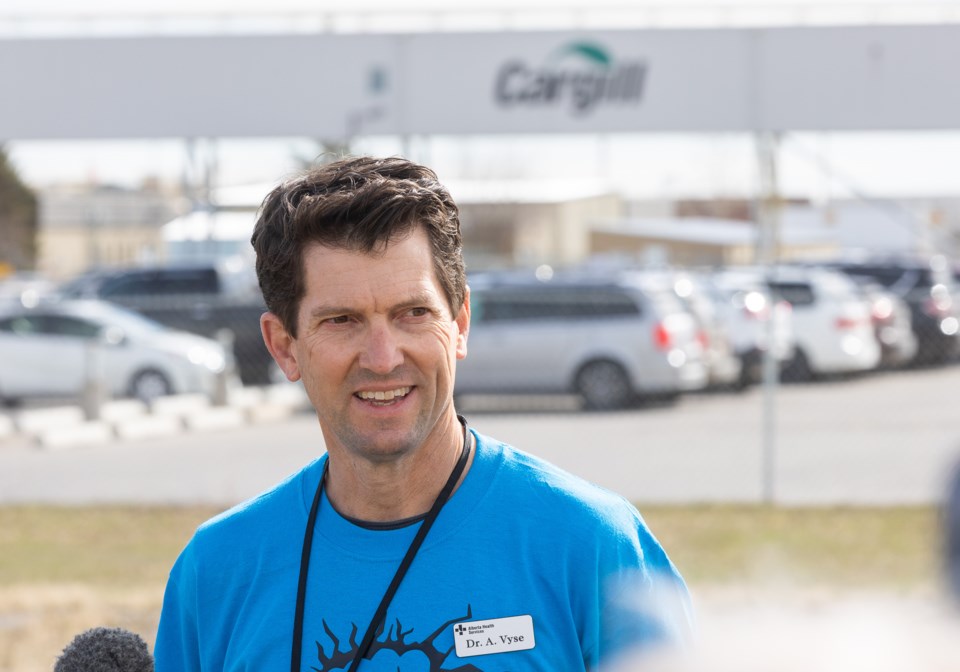 Dr. Adam Vyse speaks to media in front of the Cargill plant near High River on April 29. The team of doctors and other medical professionals began vaccinations that morning, with over 1600 of the plant's estimated 2000 workers pre-registered. By Brent Calver/OkotoksToday.ca

Workers who have had COVID-19 already will still be vaccinated, as they are still vulnerable to reinfection.

“Even if people have been previously infected, we know their immunity from the vaccine is different, it’s more robust," Vyse added.

On site were what Vyse described as an “interdisciplinary, cross-sectoral team” of four vaccinators, as well as support staff helping with paperwork, as well as volunteers to provide translation service if needed

“We’re here to get needles in arms," he said.

The importance for her was protecting the workers, many of whom come from racialized and immigrant populations.

Some of her patients, newly arrived refugees, are workers at the plant.

“We have a lot of our (clinic’s) patients working here, but there’s people who’ve been at Cargill for decades,” she said.

Her hope is the vaccination program at Cargill will be a proof of concept for other large employers of essential workers.

“We can perhaps upscale, spread it out across different large employers, and also different organizations in the community itself,” she said.

That would be just one part of a multi-pronged approach, she added, with a variety of models needed for communities without access to large vaccination sites.

“It behooves us to reach out to them and facilitate access that way.” 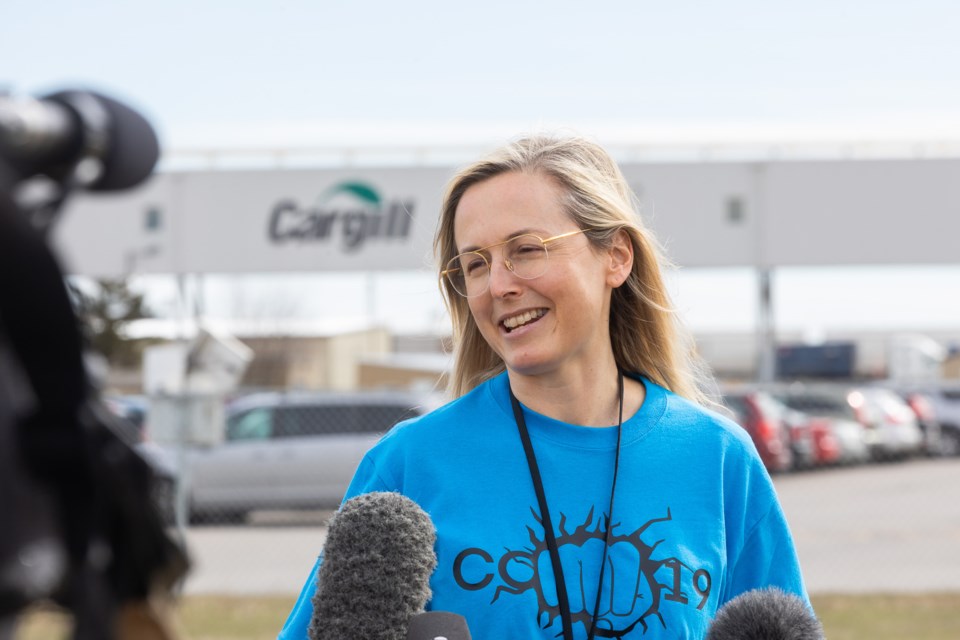 Dr. Annalee Coakley of Calgary's Mosaic Refugee Health Clinic speaks to media in front of the Cargill plant near High River on April 29. The team of doctors and other medical professionals began vaccinations that morning, with over 1600 of the plant's estimated 2000 workers pre-registered. By Brent Calver/OkotoksToday.ca

Helping on-site to facilitate the process for workers for whom English is a second language, Coakley pointed out, are the Association of International Medical Graduates and the Calgary Catholic Immigration Society, who translated all of the materials at the plant’s vaccination clinic.

Cargill cryovac operator and High River resident Jamie Welsh-Rollo was happy to get her shot.

“Honestly, it’s amazing to do this—hopefully this will prevent outbreaks in the future. It feels really, really good, especially with the losses we’ve had,” she said, adding she knew the two workers who had passed away at the plant due to COVID.

“Knowing that we’re going to prevent further damage, that feels so much better.

“Because knowing every day that I can be going to work and contracting the virus and bringing it out to the public, that was really scary for me.”

With vaccinations initially slated to begin April 22, the delay caused by a province-wide reduction of the Moderna vaccine caused a great deal of anxiety for Welsh-Rollo.

“It was infuriating. I know the spread within Cargill is fast, and it’s going to hit me hard due to the environment," she added.

Turning 25 in May, she was grateful to be eligible through her work.

Had she walked into a pharmacy she said, she would not have been eligible being under 40.

Protecting her immunocompromised five-year-old son was also a major motivation.

“Knowing I’ve been vaccinated and other people are getting vaccinated, I feel a lot safer,” she said.

About the Author: Brent Calver