Ride to Conquer Cancer coming through

About 1,800 cyclists will descend on parts of Mountain View County this weekend as the Enbridge Ride to Conquer Cancer takes place. Leaving Calgary on the morning of Aug.
Aug 13, 2018 10:26 AM By: Lea Smaldon 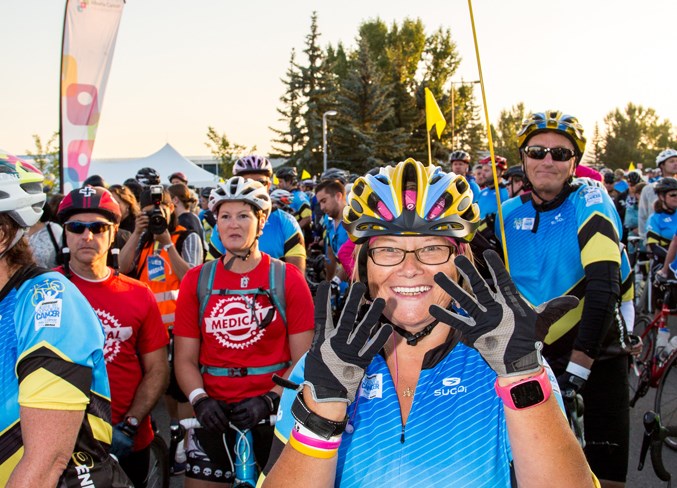 About 1,800 cyclists will descend on parts of Mountain View County for the 10th annual Enbridge Ride to Conquer Cancer.

About 1,800 cyclists will descend on parts of Mountain View County this weekend as the Enbridge Ride to Conquer Cancer takes place.

Leaving Calgary on the morning of Aug. 18, the cyclists will wind their way north along secondary highways, township roads and range roads skirting Madden, going through Cremona, head west and then north again for a stop in Sundre.

Riders will return to Calgary along nearly the same route on Aug. 19.

The 200-kilometre ride marks its 10th anniversary this year.

Funds raised by cyclists stay in Alberta to support cancer awareness, facilities, programs as well as patients and families in the fight to end cancer.

At least one rider has ties to the area and says she’s excited to be riding through the area where she grew up.

This will be Cheryl Goodwin’s second Ride to Conquer Cancer.

She said her own cancer journey in 2016 prompted her to set a physical fitness goal for herself.

The co-captain of Women on Wheels said the ride is “an extremely unique supportive way” of uniting survivors and those affected by cancer.

Riders run the gamut of those just looking to be a part of the tour to those who train and “take cycling pretty seriously.”

Goodwin said with a laugh that “having your butt acclimatized to your seat” is a big part of preparation for the hundreds of kilometres that will be spent on the road.

Day 1 culminates in a special afternoon and evening of entertainment and socializing with an overnight camp at the Sundre Rodeo Grounds.

Some people will also be accommodated in Sundre hotels and in Olds at college residences.

Intersections will be manned and signs will be posted alerting motorists of the route.

Everyone is invited to stop and wave and give encouragement to riders as they pass.