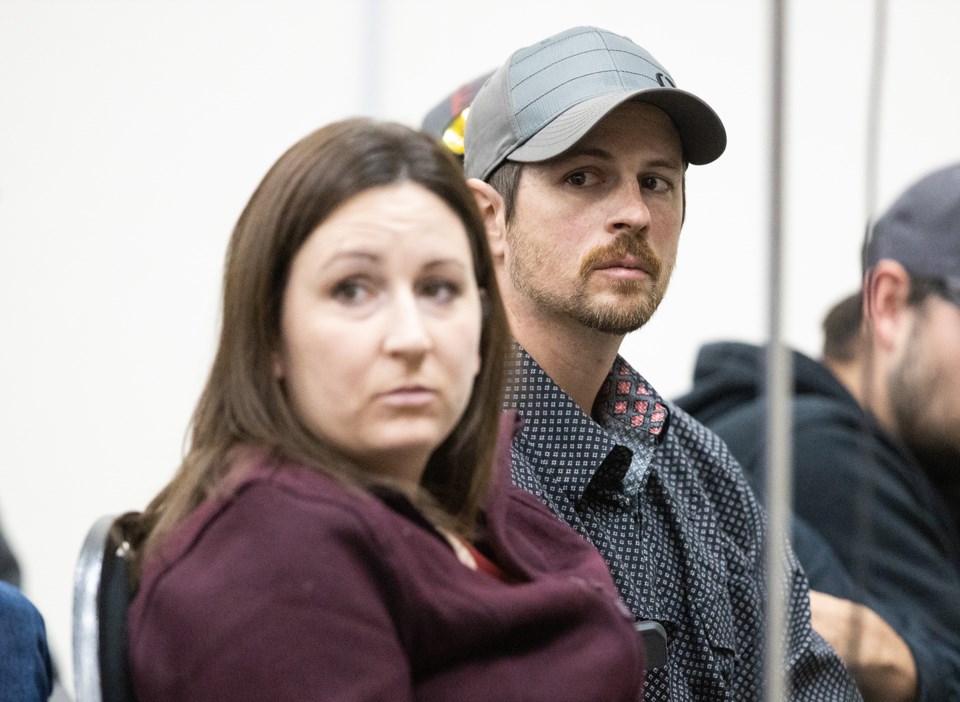 Edouard Maurice and wife Jessica at a rural crime meeting at the Okotoks on Oct. 1. Alberta Justice Minister Doug Schweitzer announced proposed legislation on Nov. 6 preventing victims of rural crime, from facing civil action — such as Edouard faces — from the perpetrators.

The lawsuit against Edouard Maurice for actions he took while defending his rural home south of Okotoks may be dead if proposed legislation announced by Alberta Justice Minster Doug Schweitzer goes through.

One of the proposals is an amendment to the Occupiers’ Liability Act.

“A criminal trespasser has no right of civil action against a law-abiding property owner who is defending their property and family against trespassers who are or who they believe to be in the process of committing a criminal act,” Schweitzer announced at a press conference in Wetaskiwin on Nov. 6.

The legislation would be retroactive to Jan. 1, 2018 — prior to Maurice’s legal issues taking place.

Ryan Randy Watson and a co-accused drove onto the Maurice residence south of Okotoks at around 5:40 a.m. on Feb. 24, 2018. They rummaged through the Maurices’ vehicles.

Edouard, who was home with his one-year-old daughter, fired a warning shot into the ground, which ricocheted and struck Watson in the wrist.

Maurice was later charged with gun offences and all charges were dropped on June 22, 2018 at Okotoks provincial court.

Watson later pled guilty to mischief and failure to comply with a court order at Okotoks Provincial Court on Feb. 28, 2019. He was sentenced to 45 days in custody, but was released after receiving credit for time served.

Maurice was served in September with papers informing him he was being sued for $100,000 by Watson for personal damages.

Maurice subsequently made a counter-claim against Watson for $110,000.

Schweitzer’s proposed legislation came as a partial result of open houses concerning rural crime being held across Alberta — including Okotoks in September.

“Every rural Albertan can relate to Eddie Maurice, — are they the next Eddie Maurice?” Schweitzer said. “The feedback was loud and clear. We need to make sure we protect property rights and the vulnerability of Albertans, make sure that they are not victimized by criminals on their own property.”

Schweitzer also proposed legislation to raise the maximum fine for trespassing to $10,000 for first incident and $25,000 for subsequent offences and jail time.

Additional measures would give victims a “greater voice in the court process.”

Measures would also be taken to make it more difficult to sell stolen materials — including copper, which is sold for scrap.

No timeline as to when the proposed changes will be put forward was provided.

Neither Edouard Maurice his lawyer were not available for comment at this time. Neither was Watson’s lawyer.

Further updates will be added when available.

Alberta legislature resumes: Focus on jobs and bill to punish protesters
Feb 25, 2020 6:00 PM
Comments
We welcome your feedback and encourage you to share your thoughts on this story. We ask that you be respectful of others and their points of view, refrain from personal attacks and stay on topic. To learn about our commenting policies and how we moderate, please read our Community Guidelines.