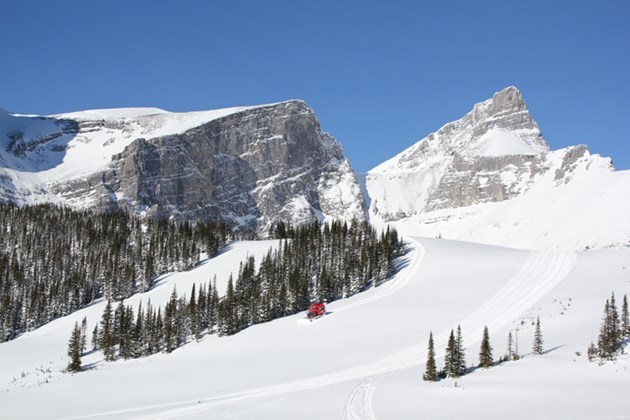 Fortress Mountain Ski Resort, located in Kananaskis Country, has received approval for its application to truck water to a bottling facility in Calgary. SUBMITTED PHOTO

KANANASKIS – A local ski hill has received approval for a controversial bid to truck its water to Calgary, according to Alberta Wilderness Association (AWA).

“AWA strongly opposed this water use and calls on Albertans to convey their concerns to the government and Fortress ski hill,” it said in a press release.

“Fortress ski hill is permitted to withdraw water for its ski business from a stream that flows into Galatea Creek, which in turn flows into Kananaskis River and the Bow River. One of the bizarre aspects of this proposal is that Fortress ski hill has been approved to truck 50 million liters of water to Calgary, where the water already naturally flows whilst providing multiple benefits along its route.”

In July, Fortress Mountain Holdings Ltd. confirmed in a public letter it had filed an application to amend its provincial water licence so it could bottle up water from the Galatea Creek, marketed for it’s ‘purity.’ The application would allow nine or more trucks per day to come in and haul the water. The ski hill filed the application under the Alberta’s Water Act, which requires a 30-day public notice period.

Alberta Environment and Parks (AEP) reportedly received over 200 statements of concern and confirmed Friday (Nov. 15) the application had been approved.

“Environment and Parks received a number of Statements of Concern but none of those who filed were found to be directly affected. All filers were contacted by email or letter in mid-October to inform them of our decision,” AEP press secretary Jess Sinclair wrote in an email.

“Although none of the Statements of Concern filed were found to be valid, we did provide information on our process and the status of this application to those who asked.”

According to AWA, bottling this water is worse for the environment for a number of reasons including the greenhouse gas emissions to transport the thousands of litres of water annually.

“Existing municipal water supplies are of very high quality, whereas this bottled water will actually be worse for the environment,” the release states.

“Its higher impacts include; removing water from a small mountain stream flowing into a protected area in the Bow River basin headwaters; greenhouse gas emissions to pump and transport thousands of truckloads per year of water that is already flowing naturally to Calgary; and helping to promote bottled/canned water as ‘purer’ than high quality municipal drinking water, when we need to greatly reduce our overall packaging and waste.”

The Outlook has contacted Fortress Mountain Holding Ltd. for this story but has not yet received a response.