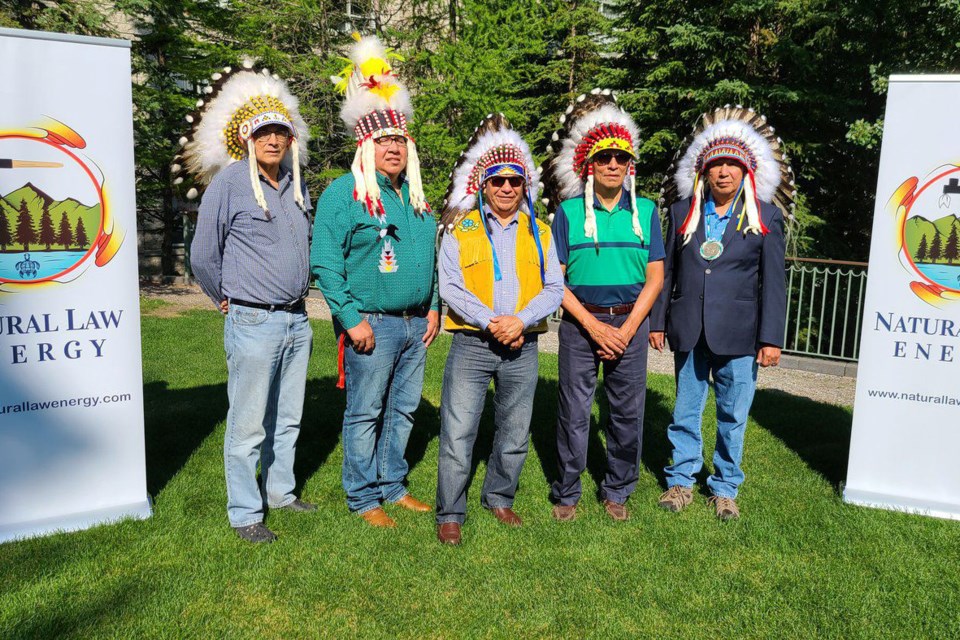 Nekaneet First Nation Chief Alvin Francis regards the recently signed memorandum of understanding with TC Energy as an opportunity for First Nations to get “our foot in the door into corporate Canada.”

Discussions to form NLE began in late spring, he says, and there are hopes to bring Samson Cree and Siksika First Nations on board as well. Preliminary talks have begun with those two nations.

The six nations in Alberta and Nekaneet, a nation in Saskatchewan, represent the first traditional land-use studies undertaken by TC Energy in relations to Keystone XL.

Francis says he’s been talking to the Calgary-based TC Energy for four years about getting involved in the project. He says when first elected he told TC Energy that he wanted more than the $50,000 to $60,000 each year that TC Energy invested in his community for training and other needs through a letter of agreement.

“I said, ‘What I want from you guys is a life-cycle agreement of the Keystone XL because that will make a big difference to my community knowing they have something coming in the long term,’” he said.

Francis believes that Canada’s adoption of the United Nations Declaration on the Rights of Indigenous People and prioritizing reconciliation finally tipped TC Energy in the right direction.

And the five nations coming together helps the cause.

“As a group we have, I guess you would say, more negotiating power with TC Energy if we get (the First Nations) together,” said Francis.

The MOU has been “percolating for a number of months,” said Terry Cunha, spokesperson for TC Energy. He says MOUs are not made publicly available.

Details for the definitive agreement are expected to be ironed out in the next four weeks, he says.

“While NLE will have a minority stake on the pipeline, both TC Energy and NLE agree that the investment will be substantial and have a positive impact for each of the nations who signed on as equity partners,” said Cunha.

Francis says NLE is in the process of finding investors and going to financial institutions to borrow money. He adds that the equity amount is based on a “percentage per $100 million.” He didn’t say what that percentage amount was.

Francis says discussions have been ongoing with the Alberta Indigenous Opportunities Corporation for the past three months and an application was filled out about a week-and-a half-ago. AIOC is a Crown corporation created by Alberta’s United Conservative Party government to offer loan guarantees for Indigenous-led natural resource projects.

“For sure we’re very pleased to see the MOU and things moving forward in a productive way. We, of course, welcome more conversations and engagements as the process and partnership proceed and get solidified,” said AIOC CEO Alicia DuBois.

DuBois stressed that AIOC does not get involved at the MOU-stage, but instead takes an active role when there is a “much more firm partnership” and once a “term sheet” is presented by the Indigenous group. The term sheet outlines the type of loan and the value of the loan required in order to purchase the investment or equity piece.

“There are many instances when access to that capital will not be granted by the financial institution without our guarantee and all parties know that,” she said.

AIOC offers $25 million to $250 million in loan guarantees per project.

DuBois says for AIOC to give the nod to a project it has to be “commercially viable. In other words, there’s a very low risk tolerance.”

The Keystone XL pipeline project does not meet that low risk tolerance.

“Say the project and partnership was at the point they were ready to paper the deal, we would not be in a position to offer a guarantee at this time, because there is a huge risk in respect to the way the American election may go. We don’t want to put Alberta taxpayer dollars at risk,” said DuBois.

DuBois’ comments come after a statement issued by Alberta Premier Jason Kenney lauding the MOU between NLE and TC Energy, saying it “affirms the shared importance Indigenous people and Alberta’s government place on projects such as Keystone XL, which will bring the jobs and steady economic benefits to lift more people onto solid financial ground – now and for years to come.”

Alberta has a $1.5-billion equity investment in Keystone XL.

DuBois said AIOC is a Crown corporation guided by its expert management board and at arms-length of the government.

“Now the (Keystone XL) project itself is one we find very interesting and in the event the parties get to the place they really solidify their partnership and some of those more risky aspects of the deal are settled or known to us and we are able to work with them, this is the type of project we certainly would be interested in supporting,” said DuBois.

Francis understands the risks involved with Keystone XL. Democratic candidate Joe Biden has pledged to cancel the presidential permit for the project should he win the office. The Keystone XL Pipeline is a 1,947-km pipeline capable of delivering 830,000 barrels per day of crude oil from Hardisty, Alta. to Steele City, Nebraska, where it will connect with TC Energy’s existing facilities to reach U.S. Gulf Coast refiners.

“In November when the U.S. election comes up, of course we’re worried about that. But we still have to keep working at this to make more sense for First Nations, because if this project goes through, how’s that going to look upon us if that does work out? It’s going to look as if you’re helping First Nations to be sustainable,” he said.

Francis says the final agreement with TC Energy will not require membership ratification. It will be a simple matter of band council resolutions from each First Nation.

“Each (band) member should have a say, but in my belief, I think chief and council represent the whole First Nation,” he said.

Each First Nation-member of the NLE will share equally in the benefits from the Keystone XL pipeline project.