Minister of Mental Health and Addictions Jason Luan said since January 2016, 350,000 injectable naloxone kits have been supplied and close to 26,000 overdose reversals have been reported in the province.
Jun 10, 2021 12:15 PM By: Canadian Press 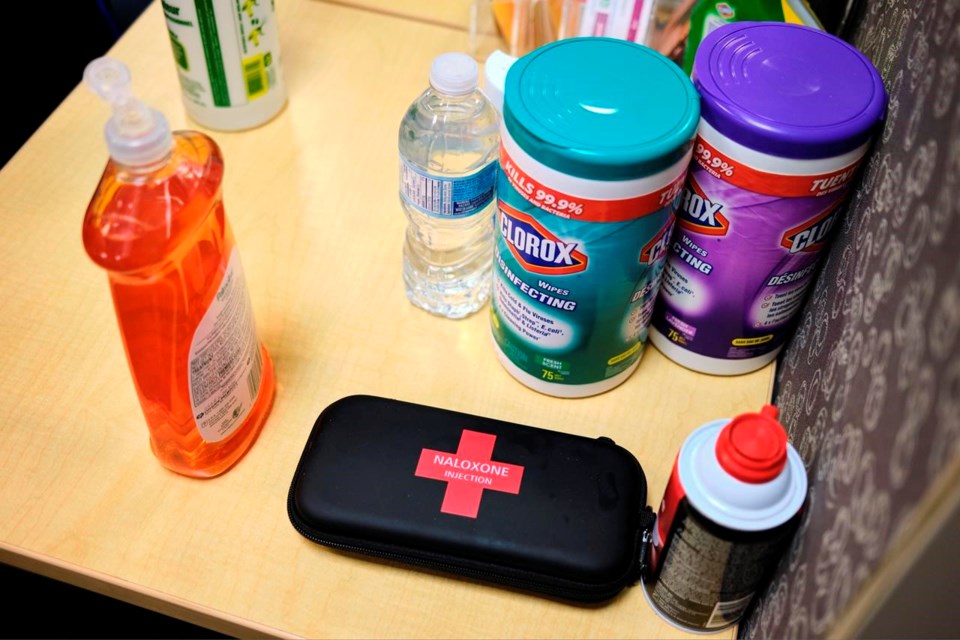 A Naloxone kit and sanitizer sit ready for volunteers to use as they prepare to head out and distribute aid to homeless people in Calgary, Alta., May 20, 2020. THE CANADIAN PRESS/Jeff McIntosh

Tricia Smith, executive director of Boyle McCauley Health Centre, said frontline workers have been feeling disheartened, overwhelmed, and tired after responding to multiple overdose calls while working with a limited number of staff.

Smith said the $1.5 million announced Wednesday by the province for nasally administered Naloxone kits as a part of a one-year pilot program in Edmonton will help.

"It's helpful in saving lives ultimately, (but) I'm hoping to continue conversations to help address the immediate crisis," Smith said.

"Is there more to be done in the realm of addiction support? Yes, absolutely."

Minister of Mental Health and Addictions Jason Luan said during a news conference that the government will evaluate the effects and benefits of distributing take-home Naloxone kits under the pilot project.

He also announced that the province will open 35 detox beds for people recovering from opioid addictions in Edmonton's George Spady Centre over the next three years at a cost of $2.1 million.

Luan said the money is a part of the province's effort to transition into a recovery-oriented system to treat its opioid crisis.

"Nasal Naloxone, as you can appreciate, is much easier to administer, as well as there's no risk of needles sticking to somebody's arm," he said.

"One nasal spray is approximately the same as five injectable Naloxone kits. It can get the heart started and person breathing again so they can immediately seek emergency care.”

Luan said since January 2016, 350,000 injectable naloxone kits have been supplied and close to 26,000 overdose reversals have been reported in the province.

Boyle Street Community Services has been advocating for more response to rising overdose rates in Edmonton since three people died together last month in a park in broad daylight.

“We commend the government for taking the overdose crisis seriously and for listening to the feedback we’re receiving from our workers at the front line of this crisis,” Jordan Reiniger, executive director of Boyle Street Community Services, said in a statement.

“These new initiatives are an important first step towards preventing overdoses in our city and making prevention and treatment services accessible to all. We look forward to continued conversations on co-ordinated, innovative and data-informed approaches to the overdose crisis.”

The feedback from the two organizations follows reports of a spike in opioid-related calls to emergency services.

Alberta Health Services said in a statement last week that it responded to 55 opioid-related calls in the Edmonton zone in just two days at the end of May. Naloxone was given during 50 of those calls and paramedics took 34 patients to hospital.

Smith said they continue to respond to multiple calls, including several coming from outside of the area they serve.

"The challenge is there's a big spike. There are days when there are multiple overdoses outside our building, in alleyways, behind the building," she said.

"I'm not funded for a team that can be outside the building, responding and engaging with clients when there's an overdose ... so that creates some challenges for us because we're responding to emergencies."

Smith said better weather and a tougher life during the pandemic could be to blame for the spike.

She said news out of Kamloops, B.C., where a First Nation used ground-penetrating radar to detect what are believed to be the remains of 215 children, may have triggered trauma and resurfaced the pain of a lot of the clients that approach them for help.

"A big majority of the population that we serve are Indigenous and so many of them may have been impacted in some way by that news."

This report by The Canadian Press was first published June 9, 2021.