The Canmore defenceman got the call from the nation's capital.
Apr 2, 2021 11:30 AM By: Rocky Mountain Outlook 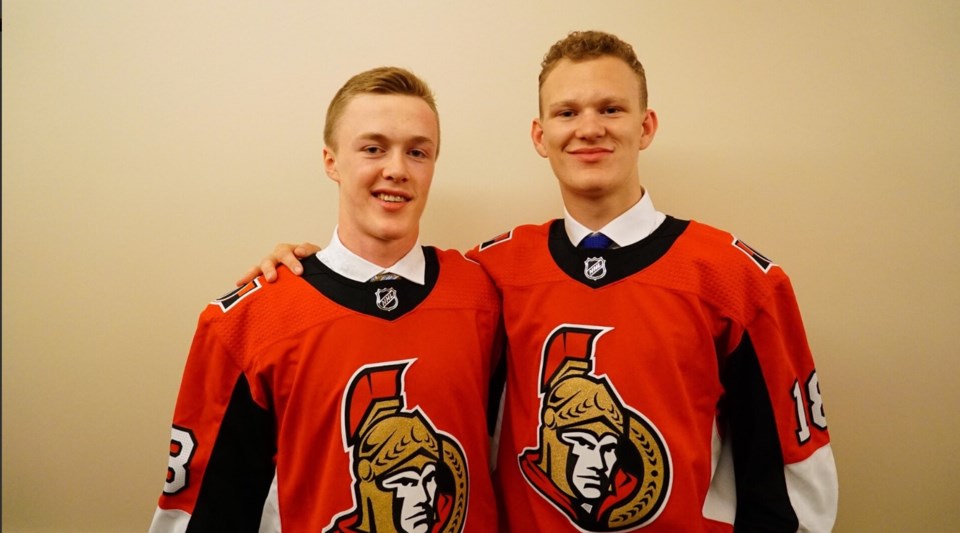 Jacob Bernard-Docker, left, and Brady Tkachuk selected by the Ottawa Senators in the first round of the NHL 2018 Entry Draft in Dallas. SUBMITTED PHOTO

OTTAWA – Jacob Bernard-Docker is headed to the Ottawa Senators.

The 20-year-old Canmore defenceman signed a three-year entry-level contract with the NHL team in the nation’s capital on Thursday (April 1).

After a mandatory quarantine, he’ll report to the Sens.

“Jacob represents another key component of our future,” said Senators general manager Pierre Dorion in a press release. "He's very mature for his age and already possesses great gap and stick detail within his game. He's an exemplary leader and a winner who we're looking forward to seeing in our lineup."

Drafted by the Senators 26th overall at the 2018 NHL Draft, Bernard-Docker played the past three seasons with the University of North Dakota Fighting Hawks.

He recorded 15 goals and 60 points over 95 career collegiate contests, and was recognized as the National Collegiate Hockey Conference’s Defensive Defenseman of the Year for this past season.

In 2020, Bernard-Docker won a gold medal with Canada after a comeback win against Russia at the 2020 IIHF World Junior Championship in the Czech Republic.

#Sens head coach D.J. Smith looks ahead to tonight's contest with Montreal and comments on the signing of Jacob Bernard-Docker. #GoSensGo | @Molson_Canadian pic.twitter.com/jjAh30OAa9

"In a lot of the hard times, you're waiting for these young kids to come and they're starting to come now and it certainly is exciting," said Smith.