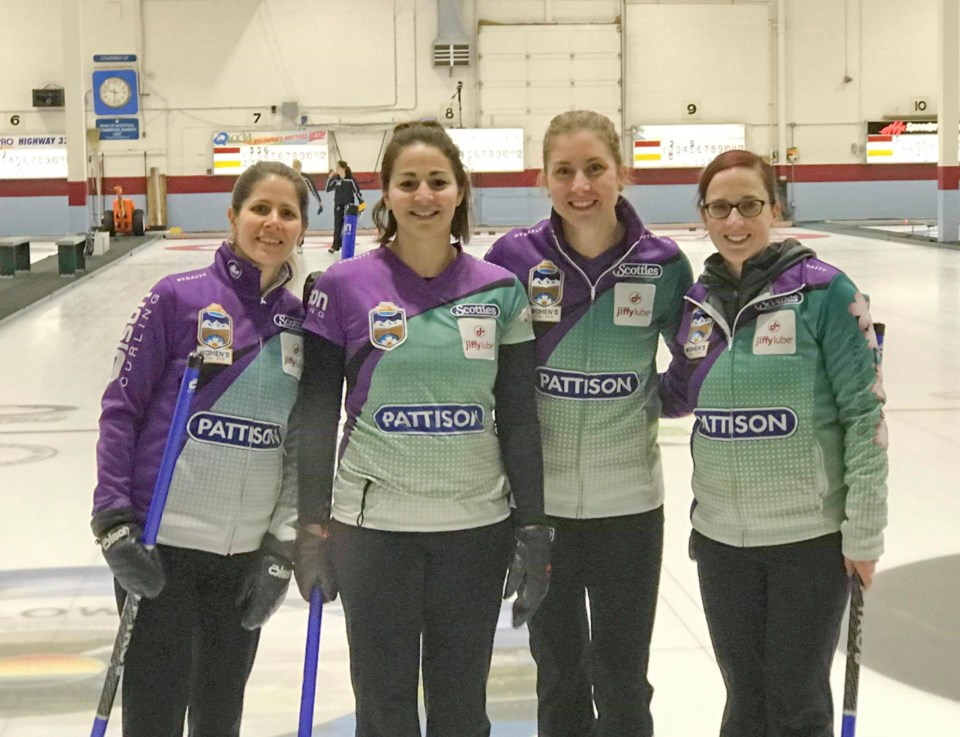 Flying under the radar is just fine for this Edmonton rink.

“We’ve all been to numerous provincials before,” Kaufman said. “So we have a good idea what to expect, we all have playoff experience as well at the Scotties, we’ve all either been in a final or a semifinal so if we can get into that position again I think we will comfortable and know what to expect and be ready for it.

“At the same time, I think we’re not one of the favourite teams there so it’s actually a good spot to be in. There’s not a lot of pressure on us … we can go in and play well with nothing to lose.”

It’s a stage the foursome is accustomed to, even if curling in Okotoks will be a first time experience for the athletes.

“It’s really nice to be out in a smaller town because I find they really come together and put on a great event,” Appelman said. “So we’re super excited to be out there.”

The Kaufman rink, based out of the Shamrock Curling Club in Edmonton, shook off an inauspicious start to the 2019-20 season with a big performance in the Okanagan at the Sunset Ranch Kelowna Double Cash Spiel in November and picked up steam from there.

“We had a pretty slow start, our first tournament did not go very well,” Curtin said. “And then we took a trip out to Kelowna and the sunshine helped us out and we made the final of the women’s event there. And we had a really good showing in Lloyd.

“Those two events especially set us up to perform well at playdowns.”

Playdowns at Jasper Place in Edmonton saw Team Kaufman post a 5-1 record, punching their provincial ticket through the B-event over St. Albert’s Krysta Hilker by an 8-5 count. Hilker went on to qualify through the C event while Team Sherrer out of Lacombe earned the A-qualification.

“This was one of the stronger fields I think we’ve seen in a while so it was nice to play in there,” Appelman said. “Jasper Place has some tricky ice to navigate on so I think being able to pick up on the ice right away gave us an advantage early on in games.

“Just being mentally present and just lots of communication got us through the whole weekend.”

The Jan. 10-12 playdowns give the qualifying rinks just 10 days to ramp up for the provincials in Okotoks.

“I think it’s really helpful to have a short turnaround,” Kaufman said. “We’re really happy with how we’re throwing right now and we don’t mind that quick turnaround and we can keep that momentum going.”

Still, it takes a great deal of planning and organization to prepare for a provincial championship – both on and off the pebbled ice.

“It was just getting together right after that last game at (playdowns) and discussing who was going to do what role,” Appelman said. “Who’s going to be thinking about food for the week, who’s going to be reading through the guide to see what the rules are, when we practice, the logistics, who’s going to pick up broomheads?

“We all have a role to play and that really helps to get us set up quickly.”

The 2020 Alberta Scotties is a return to the round-robin format with eight teams vying for four spots in the playoff round.

“I think it’s better because it resembles the national championship,” Curtin added. “At the Scotties Canadian championship you play a round-robin and it will reward the teams that are consistent over the week.”

For the latest on the 2020 Alberta Scotties go to https://www.okotokstoday.ca/2020-alberta-scotties

Junior curlers hit the Scotties ice
Jan 26, 2020 4:10 PM
Comments
We welcome your feedback and encourage you to share your thoughts. We ask that you be respectful of others and their points of view, refrain from personal attacks and stay on topic. To learn about our commenting policies and how we moderate, please read our Community Guidelines.